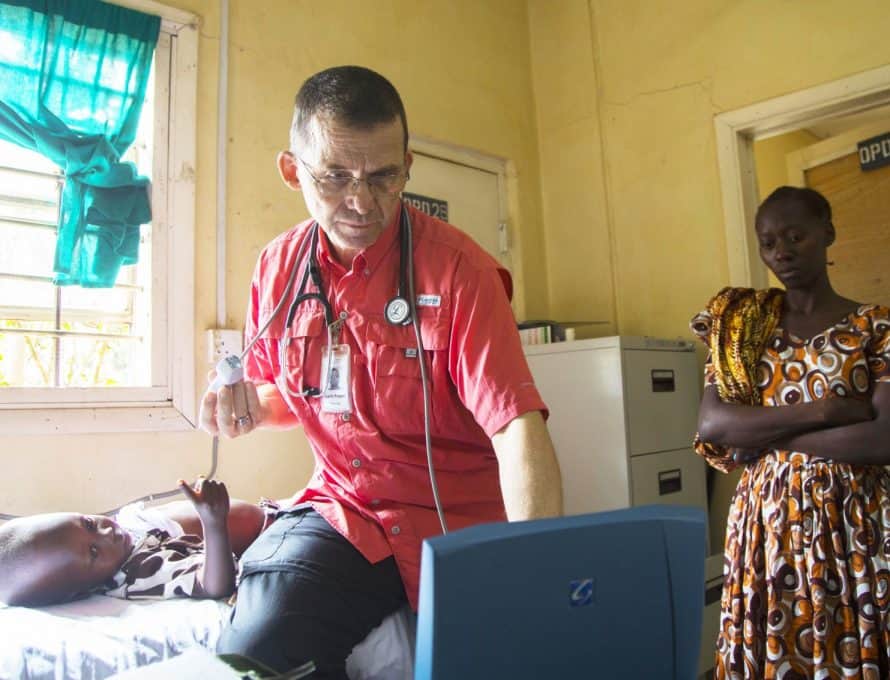 TANZANIA – Larry Pepper (center) was a NASA flight surgeon before God put him on a different trajectory—working with the IMB at hospitals in Africa. He’s now spent more than two decades offering hope at the bedside of the hurting there. IMB Photo

TANZANIA – Larry Pepper was on a trajectory. He was a NASA flight surgeon who was good at his job, active in his church, involved as a dad—and possibly headed for space. It wouldn’t be long before he ended up as a candidate finalist for a space mission. But God interrupted his plans. As Larry thought more and more about his life and its eternal significance, he felt God saying, “You’ve committed everything to me except your job.” It soon became evident God was drawing him to walk away.

“I was beginning to see the world through God’s eyes in terms of lostness,” Larry said. “For me, that meant seeing if I could use my medical skills in a way that had more kingdom impact.”

So more than two decades ago, he, his wife, Sally, and their three children packed up and moved to Africa—first to Uganda, then Lesotho and Tanzania. Over the years, the Peppers have spent countless hours at the bedside of the hurting, leading them to lasting hope in Christ.

“We have seen God’s faithfulness throughout all of these years as we’re worked here,” Larry said. “It has been humbling and incredible to watch.”

Keeping the well from running dry

At the end of a beaten-up road in Tanzania, a small hospital occasionally gets as full as it can get, and then runs on empty. In the past, it’s had moments where sick children slept two or three to a bed. It’s had moments where anesthetic drugs for C-sections and suture materials for surgery have run out.

But the situation has never stayed that way for long, reported Larry Pepper, an IMB doctor. Over and over, churches have stepped up to cover the hospital’s needs, all the way from wheelchairs to building a new pediatric wing.

“Churches of all sizes have helped,” Larry said. “And because they have, we have seen God work to spread the gospel in amazing ways.”

Over the past 22 years, churches have supported the Peppers’ work through the Cooperative Program and the Lottie Moon Christmas Offering, the funding sources that keeps them on the field. They have provided equipment, and they have met the hospital’s daily needs.

“We’re just two people,” Larry said. “But we find that when other people get a passion to come alongside us, God uses it to further His kingdom.”