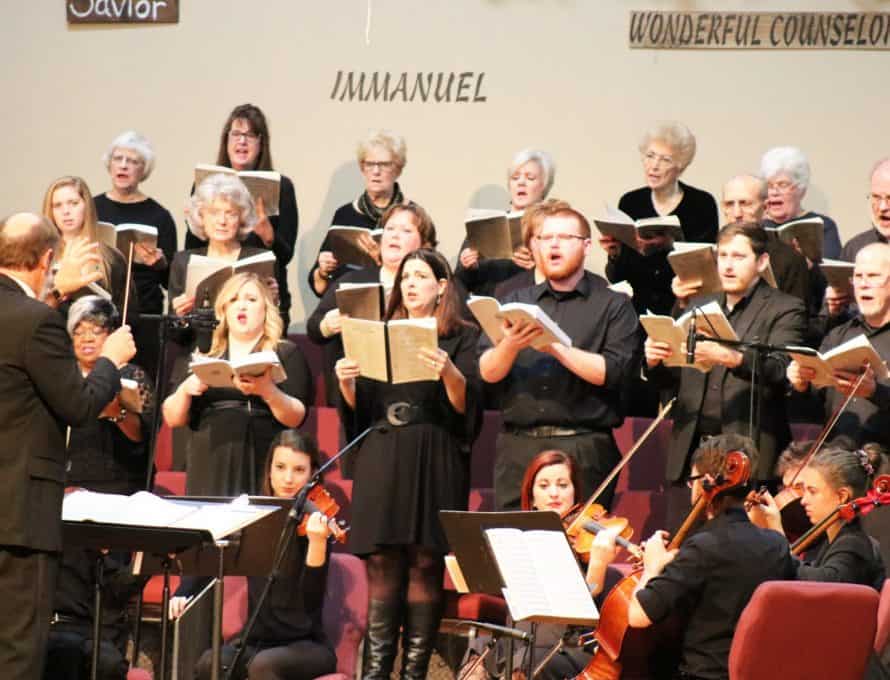 COLUMBIA – On a cold, clear night in November, a crowd of 1,700 people gathered at Jesse Hall on the campus of the University of Missouri. They sat in rapt silence for nearly three hours as Scripture was unfolded, telling the story of Christ. It began with the prophecies of Isaiah, moved onto His birth in Luke, wound through His ministry and death in the Gospels, celebrated His resurrection with shouts of Hallelujah, and ended with selections from Revelation in anticipation of His second coming. It was a performance of Handel’s “Messiah.”

Scripture for the masses

When it comes to Messiah, “the only thing you’re doing is singing Scripture,” said Randy Schilb, associate pastor of worship at Memorial Baptist, Columbia. Schilb and his choir performed Messiah Dec. 9.

“Any other Christmas musical in the world has a lot of great, sacred songs, but with Messiah, you’re just singing the Word of God,” he said. “So many of the texts in Messiah do a great job of focusing on advent. It’s not just about Jesus in the manger; it’s about Jesus in glory. In the world we live in, it’s hard sometimes to get the gospel out to people who don’t want to listen to it. But they’ll listen to the Messiah, and they’re hearing Scripture.”

That foundation in Scripture is probably what helps it remain a mainstay of those celebrating Jesus. But it’s also one of the most enduring pieces of classical music and is a staple of secular celebrations of Christmas, as was the case at the University of Missouri and in countless other performances around the world this season. For them, it’s the quality of the music that helps it become a favorite Christmas tradition; they’re hearing the Word of God and singing His praises because of Handel’s musical genius.

“It’s not hard to listen to,” Schilb said. “[‘Hallelujah’] is a 300-year-old praise chorus. Handel did a great job writing music that was listenable even though it’s really hard to sing and play. That’s a characteristic of excellent music-writing.”

Handel also knew what his audience might latch on to. Messiah’s most recognizable moments – such as that famed chorus, Hallelujah – are in the key of D, which “makes it a range that anyone can hum,” said John Francis, a professor of music and worship at Hannibal-LaGrange University. Then there’s the lyrics: repetitive, but “repetitive in a good way,” he said.

Beyond that, Robin Smith, a professor of music at Southwest Baptist University, said Handel uses a technique called “text painting” to help reinforce the meaning to the listener. For example, when a tenor sings a lyric from Isaiah 40:4 in the third song, “every mountain and hill made low, the crooked straight and the rough places plain,” his voice jumps higher on “mountain” and “hill” then drops to a lower register on “low.” In the next phrase, “the crooked straight” and “rough places plain,” the word “crooked” is exaggerated syllable-to-syllable by the vocalist while “straight” is sung smoothly and gently. “Rough” gets a heavy rolled R while the singer eases into “plain,” painting a direct musical picture of the text.

But that’s not to say the oratorio is overly simple or dumbed down.

“Handel has a spectacular way of using the different voice types,” Smith said, noting that he wrote several variations of many of the songs so they could be performed by different performers depending on their range. “He weaves all of those things very well throughout the work. As a composer, he was quite adept at making the voice fit whatever text he was portraying.”

In addition to teaching vocal diction and opera classes, Smith has performed several of the solos from Messiah throughout the years. It’s full of melismatic passages – where a single syllable of text is sung moving between several different notes in succession – that had her practicing for her solos for “months and months and months. And it’s not just hard for the soloists; it’s hard for the choir as well.” 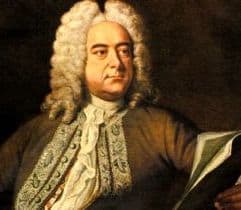 George Frideric Handel wrote the 50 songs that make up Messiah in just 24 days in the late summer of 1741. Though it initially met a cool reception, it soon exploded in popularity and became one of the best-known and most frequently performed choral works in music.

It’s a three-movement oratorio, more or less an opera without the theatrical elements. In the first part, the Christmas section, Christ’s coming is predicted by the Old Testament prophets and the shepherds hear the good news of His birth from the heavenly host. Part II, the Easter segment, tells His crucifixion, resurrection, and ascension. The third part begins with the promise of redemption, a prediction of judgment and the final victory over sin and death.

Though the triumphant calls of Hallelujah seem like a fitting grand finale to the oratorio, it comes at the end of the second part – an Easter anthem that has been transposed to Christmas. In addition to being the most famous part of the work, it has become a tradition for the audience to stand during the chorus. This reportedly dates back to its London debut in 1743, when it is reported that during Hallelujah, King George II was so stirred by the majesty of the work he leaped to his feet, prompting the rest of the crowd to follow suit. It’s impossible to say for sure that was the case. Smith reports hearing of another version of the story that George found the piece too long and merely wanted to stretch his legs.

Regardless, that is the one song that stands out to most people, Smith included.

Though she has a musical appreciation for the entire work, she prefers Hallelujah. “It just speaks to me,” she said. “It stirs emotions within the listener.”

The subject matter is the secret of Hallelujah’s popularity, Francis said.

“Despite the accompaniment – be it an old piano, a chamber ensemble, a full orchestra, or rock band; despite the singers – be it solo, four-part choir, or praise team or the venue Royal Albert Hall, or a food court at St. Louis Mills, the greatness of Hallelujah is the great Savior for whom it stands. Can you think of any figure in history, any one person – whether it is for a worldly god or an amazing potentate – that more stirring music has been written of than Jesus Christ? There are just some songs that have been supernaturally touched. I think this is one of them.”

Whether its durability is due to its biblical source material or the musical engineering, one thing seems clear: Handel intended the piece to be an instrument of worship.

“It’s the epitome of everything you think about when you think of worship and the majesty of Jesus,” Smith said. “Handel just expresses that very, very well.”

Handel wasn’t alone in using Scripture as a source – many painters, sculptures, musicians, etc., did the same, even if that wasn’t truly their passion.

“Beethoven and Brahms wrote sacred pieces, but they were humanists using a good text because everyone was going to like it,” Schilb said. “I haven’t talked to Handel, but the way his work turned out, I think he was a believer.”

It’s been said that because it was written in less than a month, Handel wrote with “almost a supernatural fervor,” Francis said. “You can cynically try to explain that away, but there’s just too much there to ignore. Today the concern was about how a song is going to chart, but he was making pure art, and when you’re making art, then you can refine your focus. His focus was the passion of the Christ. Composers like Bach and Handel were proven to be pious men. They wrote their music S.D.G – Soli Deo gloria (Latin for ‘To God alone be the glory’).”

Indeed, at the bottom of the manuscript for Messiah, Handel did pen three letters after the final note, just above his own initials and twice as large: S.D.G. 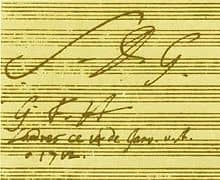 George Frideric Handel’s signature at the end of his manuscript of “Messiah,” under the initials S.D.G, which stand for “Soli Deo gloria” (Latin for “To God alone be the glory”).