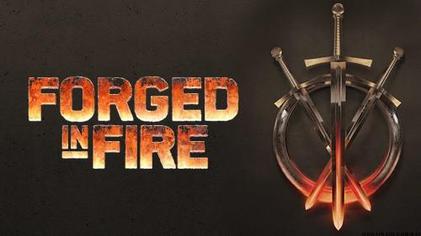 DESLOGE – After the most physically, mentally and emotionally draining day he had ever experienced, John Wigger, longtime member of First Baptist Church Desloge (FBCD), trudged back to his room exhausted, but satisfied with the outcome of the first round.

Wigger, part-owner of blacksmithing business Hawthorne Forge, was chosen to be on “Forged in Fire,” a competitive and popular bladesmithing show that airs on the History channel, after the casting director saw pictures of his forged creations on Instagram. His show aired on Nov. 21, but was originally filmed in New York in August. 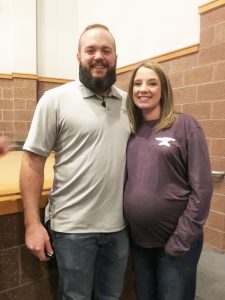 On that blazing 106-degree day, Wigger focused on forging a quality blade within the competition’s first-round parameters, however he also couldn’t stop thinking about his fellow contestant’s story and the mission work he was doing in Uganda.

One of his fellow contestants, Tim Troyer, had told the group about the non-profit organization he founded called The Reckoning International (TRI). TRI is a faith-based organization that partners with needy people in developing countries to find opportunities that will bring sustainable change not only to their lives, but also to their entire communities. For one project, Bamba Forge, Troyer travels to Uganda to teach the art of knife making to orphan and at-risk young men.

“We were drained from the day and we were headed back to our rooms and I pulled Tim aside so we could talk for a minute,” Wigger said. “I said ‘I’ve been thinking about it and praying all day and this might sound kind of crazy, but I want to go on a mission trip with you to Uganda.’ Tim started to tear up and said, ‘John, you don’t understand. There was a conflict with my business. I wasn’t supposed to be here. I was supposed to be on another episode, but then got pushed back. I prayed about it and though the timing wasn’t great, I decided God was leading me to come anyway. I also prayed that I would meet another blacksmith who would want to go to Uganda with me.’”

Wigger, who works full-time in school maintenance and runs his forging business with his partner, Joe Nipper, has never felt led by God to go on an international mission trip before. However, he has helped with the youth group at FBCD for many years and serves in other handy-man ways whenever he can, so he can see how God has prepared him for a trip like this.

Meanwhile, the second round of the Forged in Fire competition didn’t go as well as Wigger had hoped. Feeling discouraged, he called his wife to talk it over. 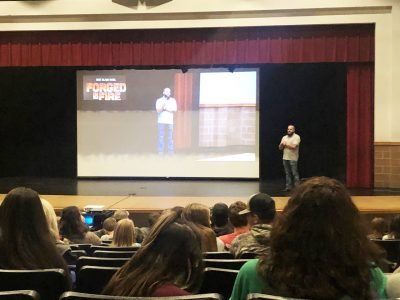 “I told Erica about talking to Tim for an hour about Uganda and then I told her how I was upset about how the second round went,” Wigger said. “She said ‘What if it doesn’t matter how the competition goes? I bet the reason you were supposed to be there is to connect with Tim and be part of the mission in Uganda.’ It was like the pressure was suddenly off. Maybe it really didn’t matter if I won or not. Maybe God had already accomplished the purpose of this opportunity.”

“You bladesmiths have engaged in one of our most difficult competitions, however only one of you can be the Forged in Fire champion,” said Forged in Fire host Wil Willis, at the end of the competition. “And that champion is… John.”

And while he was certainly thrilled to be declared the champion in the moment (and win $10,000), it was even more exciting to be surrounded by a watch party of more than 350 of his closest family and friends when he was finally free of the secret he’d been keeping since August.

“Everyone who came out to the watch party was so supportive,” Wigger said. “FBC Desloge gave out nachos and water, and we had several other vendors sell items and give the proceeds to Uganda, but the main goal of the party was for it to be a sort of launch of this new calling on my life.”

That night he announced his big goal to raise $50,000 before he leaves for Uganda later this summer. He wants to go over there with plenty of tools and materials that will help these Ugandan men and encourage them. And Wigger thinks with God’s sovereign hand and this newfound platform, it’s definitely doable.

For more information or to make a donation to The Reckoning International, visit thereckoning.org.