NASHVILLE (BP) – Most Americans want more religious meaning to the Christmas season, and for some that includes the seasonal greetings we say to each other.

A new study from LifeWay Research found two-thirds of Americans (65 percent) say, “Christmas should be more about Jesus.”

Those looking for more Christ in Christmas in 2018, however, are significantly fewer than four years ago. A 2014 LifeWay Research study found 79 percent of Americans at that time said Christmas should be more about Jesus. 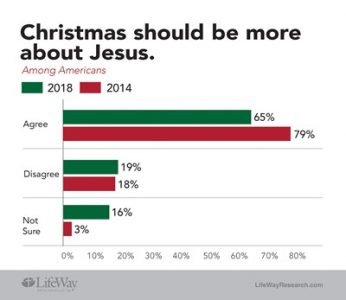 While similar numbers registered disagreement with the statement in 2014 and 2018 (18 and 19 percent respectively), the percentage who said they were unsure if Christmas should be more about Jesus jumped from 3 percent four years ago to 16 percent today.

“Saying Christmas should be more about Jesus is a little like saying Thanksgiving should be more about giving thanks. It’s in the name of the holiday,” said Scott McConnell, executive director of LifeWay Research, based in Nashville. “Yet, it appears there is less cultural expectation for celebrations of the Christmas holiday to include the religious aspect.”

Much of the shift came from non-Christians. In 2014, a majority of members of other faiths (63 percent) and almost half of the non-religious (46 percent) agreed that Christmas should be more about Jesus. Today, those numbers have dropped by nearly half.

In 2018, around a third of Americans of other religious persuasions (35 percent) and slightly more than a quarter of the non-religious (28 percent) believe Christmas needs more Christ.

One of the ways some want to see more recognition of Jesus this time of year is in our greetings. Around a third of Americans (32 percent) say it is offensive when someone says “Happy Holidays” instead of “Merry Christmas,” with a similar number (33 percent) saying the same about using “X-mas” instead of “Christmas.”

Those numbers are similar to four years ago. In 2014, 29 percent found “Happy Holidays” offensive and 39 percent said the same about “X-mas.”

Today, 40 percent of Christians find “Happy Holidays” to be offensive, compared to 12 percent of members of other religions and 15 percent of the non-religious. Around two-thirds of those with evangelical beliefs (65 percent) say they are offended by “Happy Holidays” being used instead of “Merry Christmas.”

Americans age 50 and over are almost twice as likely to say they find “Happy Holidays” offensive than those under 50 — 42 percent to 22 percent.

“It’s likely that Christians and older Americans are nostalgic for previous years or reluctant to acknowledge that not everyone celebrates Christmas this time of year,” McConnell said.

“Many have the idea that most Americans are the same or that we share one culture of baseball, apple pie and Christmas, but that’s not the case,” he said. “And when we encounter someone who believes differently from us, that can be jarring and even seem offensive for some.”

“Christians may be better served finding a way to wish their non-Christian friends and family … all the blessings possible during the season in which believers celebrate God blessing Earth with His Son,” McConnell said.

Methodology: LifeWay Research conducted the study of 1,004 Americans, Sept. 21-23, 2018. The survey was conducted using the web-enabled KnowledgePanel, a probability-based panel designed to be representative of the U.S. population. Initially, participants are chosen scientifically by a random selection of telephone numbers and residential addresses. Persons in selected households are then invited by telephone or by mail to participate in the web-enabled KnowledgePanel. For those who agree to participate but do not already have internet access, Ipsos (formerly GfK) provides at no cost a laptop and ISP connection.

Sample stratification and base weights were used for gender, age, race/ethnicity, region, metro/non-metro, home ownership, education and income to reflect the most recent U.S. Census data. Study-specific weights included gender by age, race/ethnicity, region and education to reflect GSS 2016 data. The sample provides 95 percent confidence that the sampling error does not exceed plus or minus 3 percentage points. Margins of error are higher in subgroups.