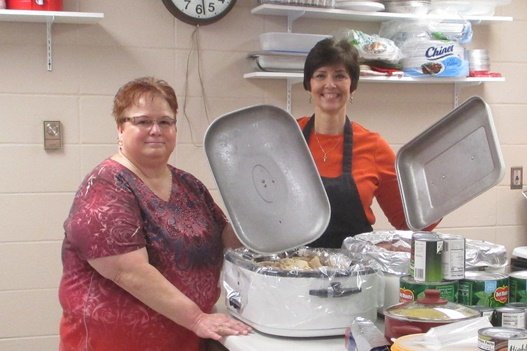 “It’s God’s way of blessing our community,” said volunteer Sandra Gibbs, who with her late husband Minor (Chubby) Gibbs birthed the idea. “We do what we would do with our own family.”

She and Chubby tried to volunteer at a Salvation Army dinner in another nearby city, but the ministry had sufficient help already. Gibbs then talked with FBC Pastor Brian Stone, who suggested talking with others in the church. Four others – Skip Barton, Susie Job, Jennifer Porter and Dori Dochtermann – shared the vision.

“The first year was 2009. We had 25 people, workers and the community. We were disappointed,” Gibbs said.

Then, she added, God gave her a word: “Consistency.” So they continued the ministry.

“We take the meals to the those who work on Sundays, at the gas stations, at the water plant (north of Canton). The church offers the meal at no charge to anyone.

“We don’t even put a donation bucket out there,” she added.

Gibbs always wanted it to be not just a local church project. So the Canton council of churches provided the 65 pounds of ham for the 2018 dinner. The St. Joseph Catholic Church provided rolls.

“It a community event.”

Although it is a community event – and some from other churches assist in serving – the lead still comes from First Baptist, Canton. Church members who can’t be there often give food or money for the dinner. No one is coerced to participate. Some may help set up early or come in later to do dishes.

“I don’t want – and God doesn’t either – for it to be a burden on people. They have their families too,” she said. “It’s whoever God puts out there as far as people to help (serve).

“There have been a lot of touching stories (through the years) that God gives to encourage us,” Gibbs said of the Thanksgiving labor of Christian love. “There was a couple almost 90 years old that wasn’t able to prepare their meal anymore and they said what a blessing it was. There was a single mom with her children that told how a refrigerator had gone out and how the meal was needed.”