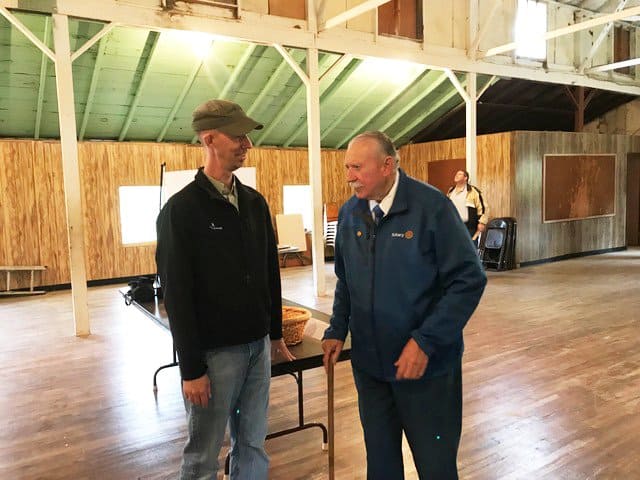 CHILLICOTHE – Dan Wilford (right), pastor of First Baptist Church, Milan, tells Brad Fields, manager of Grand Oaks Baptist Assembly, about surrendering to preach in the right front corner of Parker Hall, the camp’s chapel building for many years since 1947. The building has not been used as a chapel for many years now and will soon be torn down to be replaced by a larger gymnasium and classroom complex. Pathway photo by Richard Nations

CHILLICOTHE – Grand Oaks Baptist Assembly will be replacing a long-standing structure on their camp ground in the coming year.  Parker Hall will be torn down to make way for a new multi-purpose building which will include a gymnasium, camp offices, classrooms and a concrete storm shelter on the lower level.

Parker Hall sits in the center of the Grand Oaks campus. It has been used since 1947 as a chapel and meeting place for the Baptist camp which serves eight associations in northern Missouri.

It was constructed by fusing two World War II era surplus army barracks together to form a long chapel.  Countless children and teens sang camp songs and listened to sermons on the wooden benches in that chapel. Many made spiritual decisions there.

The Grand Oaks board voted in their fall meeting to proceed with the demolition of the old chapel in order to get started on the construction of the new building. There will be three phases to the project.  Demolition and leveling of the site will begin as early as next spring.  Then the concrete shell basement will be constructed and finished (this can serve as classrooms and a storm shelter).  When funds are raised, a structure will be built on top of the concrete shell to form the gymnasium and camp offices.  Board officials say they will build in stages as the funds come in and they expect that may take three years.

They are calling the campaign, “Strong Roots/New Branches: Protecting and Providing for the Next Generation.”

Rodney Dorr is the chairman of the development committee of the board. He is encouraging the eight Baptist associations in northern Missouri, who make up the Grand Oaks board to get the word out to their associations about the financial need.  They have set a goal of $675,000 for the project and have raised a little over $139,000 to date.

Brad Fields, manager of Grand Oaks, is working with Lee Rhoad, a St. Joseph architect, to develop the plans for the construction, some of which will be volunteer labor and some contracted out.

The history of the chapel holds some fine memories for the thousands of kids who sat in the chapel during church camps.  But the building’s low ceilings with exposed rafters did not allow it to be converted into a gymnasium when a newer chapel was constructed in the 1980’s.  It is still used as an indoor recreation facility on rainy days at the camp, but it’s purpose mostly is storage nowadays.

Tours of the building were offered during a recent fundraising banquet held at the camp in mid-October.  Some of the hardwood floor boards were sawed into small plaques with a wood-burned Grand Oaks logo imprinted in them as gifts for donors to the campaign.

The central location of the new facility will make it a gathering point for the camps and prove to be a popular recreation spot as well as classroom location for disciple making efforts.

Dorr stressed that one of the key reasons for the new building is to have a secure place for the campers to go in case of a tornado or strong windstorm. The basement area will be a “concrete box” with metal doors and storm shutters which will accommodate a couple hundred campers, keeping them safe in the event of inclement weather.

Grand Oaks officials invite interested individuals to take a look at the plans for the expansion by checking the camp website: www.grandoaks.camp. ν