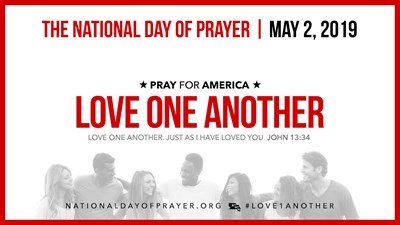 ROGERS, Ark. (BP) – “Love One Another” is the theme for the 2019 National Day of Prayer May 2, event president Ronnie Floyd announced today (Oct. 30).

Anchored in John 13:34, the theme seeks to mobilize the nation in prayer on May 2 in every U.S. locale across generational, ethnic and linguistic lines, said Floyd, senior pastor of the multisite Cross Church in northwest Arkansas.

“I realize that our task today is daunting and quite intimidating,” Floyd said in his Facebook announcement, “but it is not impossible.

Floyd, a former Southern Baptist Convention president, announced the theme and Scripture during a two-day National Leadership Summit ending today at the Pinnacle Hills campus of Cross Church in Rogers.

“The Bible says we are to pray for all those in authority,” said Pathway Editor Don Hinkle, a member of the Missouri National Day of Prayer Committee. “It also says by doing so that it will lead us to live tranquil and quiet lives in all godliness and dignity because it is good and acceptable in the sight of God our Savior. I hope Missouri Southern Baptists will join us at the State Capitol May 2 for this important observance and if unable to come to Jefferson City, that they will prayerfully consider hosting a similar event at the county courthouses.”

National Day of Prayer is seeking to reach the nation’s 328 million people in 3,142 counties and 19,510 incorporated places, including cities, towns, villages.

Nearly a third, 29 percent, of Americans are nonreligious, ranging in extremes from religious resistance to solid secularism, Floyd said, referencing Pew Research Center numbers released in August. Juxtaposed to the nonreligious are 17 percent of Americans that Pew categorized as Sunday stalwarts, Floyd said, “meaning religious traditionalists actively involved in their faith and engaged in their congregations.”

“The remaining persons beyond these extremes,” Floyd said, “they believe all kinds of things and participate in all kinds of ways in American life today.”

At least one event in every city, town and county of America, in more than 350,000 churches spanning 200 denominations, and including all generations, ethnicities and languages spoken in U.S. is the prayer effort’s goal.

“Wouldn’t it be absolutely remarkable that one day,” Floyd asked, “the National Day of Prayer is heard in every language that is spoken in the United States?”

In addition to Floyd, the summit offered insight from 14 national leaders spanning ethnicities, Christian denominations and generations, and including both sexes.

Kie Bowman, senior pastor of Hyde Park Baptist Church and The Quarries Church of Austin, Texas, was among summit presenters. He encouraged attendees to mobilize their churches in prayer.

“Prayer meetings change the world,” he said. “And in those settings, the Holy Spirit speaks.”

Additional National Day of Prayer information is available on the event website, nationaldayofprayer.org, and its’ Facebook page.