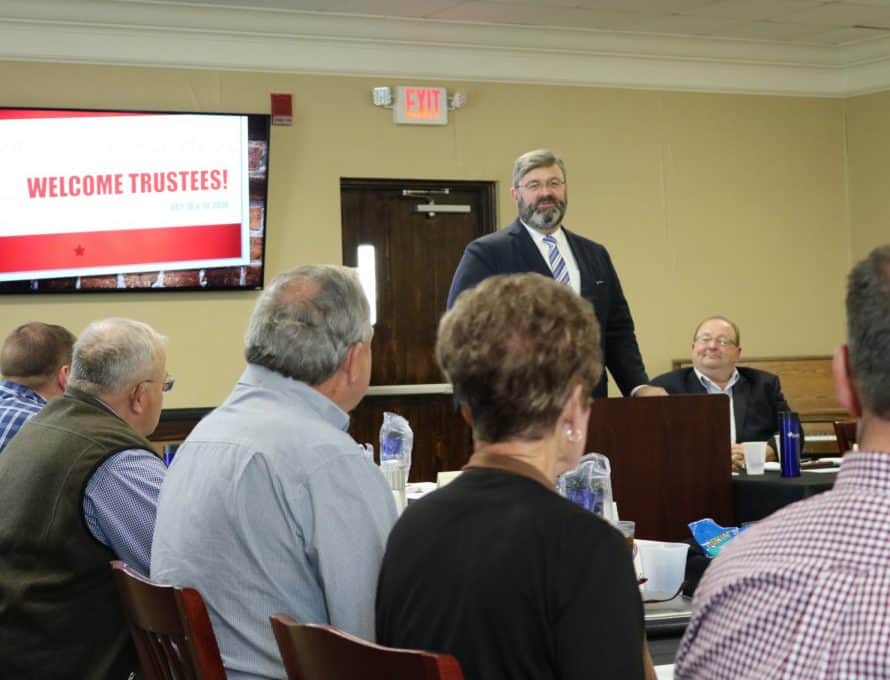 HANNIBAL — Hannibal-LaGrange University’s Board of Trustees visited campus for their annual fall meeting Thursday and Friday, October 18 and 19.

While on campus, the board heard reports on the activities of the University over the last year. It was reported that 254 graduates were presented diplomas in May, 40 students are traveling to Israel over Christmas break with a scholarship from Passages Israel, HLGU received a military friendly award, the athletic department has joined the National Christian College Athletic Association, and more.

Additionally, the board voted to adopt, support, and participate in HLGU’s Student Success Initiative, a campaign aimed at raising funds for scholarships, missions, faculty development, and various campus and department enhancements.

“We had a great meeting of our board of trustees,” said Anthony Allen, HLGU President. “We have a very capable and engaged board to not only provide leadership but also vision as we think about the future of Hannibal-LaGrange University.”

“There’s great love and concern for students for this institution, and the board has committed sacrificially to complete the task given to us,” said Dwight Blankenship, chairman of the board of trustees. “We are positive about the future. We know we’ve got challenges, but we’re positive about the direction we’re going in.”

Thursday night, trustees and administration gathered for an appreciation banquet organized by the president’s office. During the evening, trustees heard from two students on how HLGU has impacted their lives. Special music was provided by Steven Hodge, a senior music worship major, and the a cappella ensemble La Sua Voce.

Additionally, Trustee Mitch Jackson was recognized at the banquet as he rotates off the board after ten years of excellent service to the University.

The Northeast is known as a rough part of town. Its buildings are run down, the streets are narro