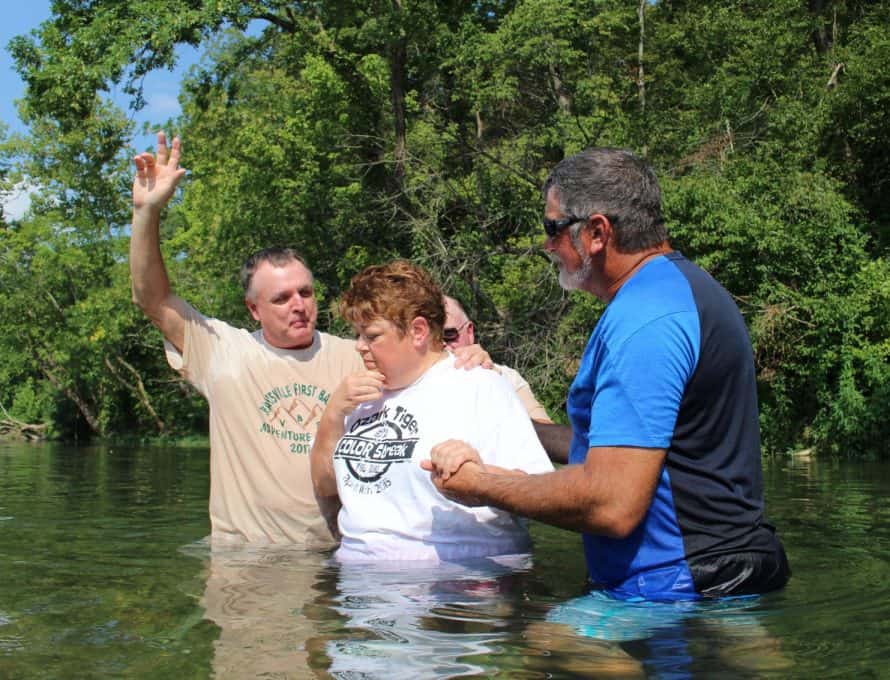 REAVISVILLE – Once a year, members of Reavisville First Baptist Church and their families gather at the creek for a day of worship and celebration. Hundreds of people watch and cheer as new believers are baptized in the water and brought to new life in Christ.

On August 26, this year, Pastor Mark Reavis and his deacons baptized 23 new believers, and they’re just getting started.

According to Jeannie Reavis, wife of Pastor Mark, this has been a wonderful year for their church.

“We’ve been blessed to get some new families involved [in the church],” Jeannie said. “What’s been amazing to us is most of those who were baptized that day were adults – not just the children from VBS.”

When asked about the key to their church’s success, Jeannie has a pretty simple answer.

But they don’t limit themselves to just invitations. Reavisville First Baptist is a small country church, and the Reavis’ plan their events and outreach around that fact.

They have a yearly community fish fry, and they have a fire pit at the church where they sometimes hold Sunday night services. Pastor Mark also tailors his sermons and messages to the community he serves.

“People at Reavisville Baptist often hear illustrations of coon-hunting stories, fishing stories, slopping the hogs and shucking the corn,” Mark told The Pathway. “They know and understand that stuff, and it brings the Bible to life for them.

Their church also continues to minister to members once they join the church. They recently started a new members class to teach new believers about Baptist beliefs.

“A lot of times when they’re saved, they don’t have any actual understanding of the church,” Jeannie said. “We want to make it easy for them to come and ask questions.”

Sometimes on Sunday nights, the church will have a service devoted to just questions and answers, so that believers can ask questions about things they don’t understand. Also, they try to equip all new believers with a Bible – especially those who might not be able to afford it or are overwhelmed by the many different options.

“It’s my opinion that growing new believers may be the toughest job of all in today’s churches,” Mark said.

But even though the job may be difficult, Mark is optimistic.

“Many of the people here were previously unchurched, and they have a hunger for the truth of God’s Word in their lives,” Mark said. “I also have been so fortunate to have a core group of very solid, Godly men and women supporting me as their pastor. That is absolutely priceless.”

The church recently had its 40th anniversary, and the Reavis’ are simply thankful for all of the work God has done and is doing.

All Jeannie had to say was, “We’ve been blessed.”