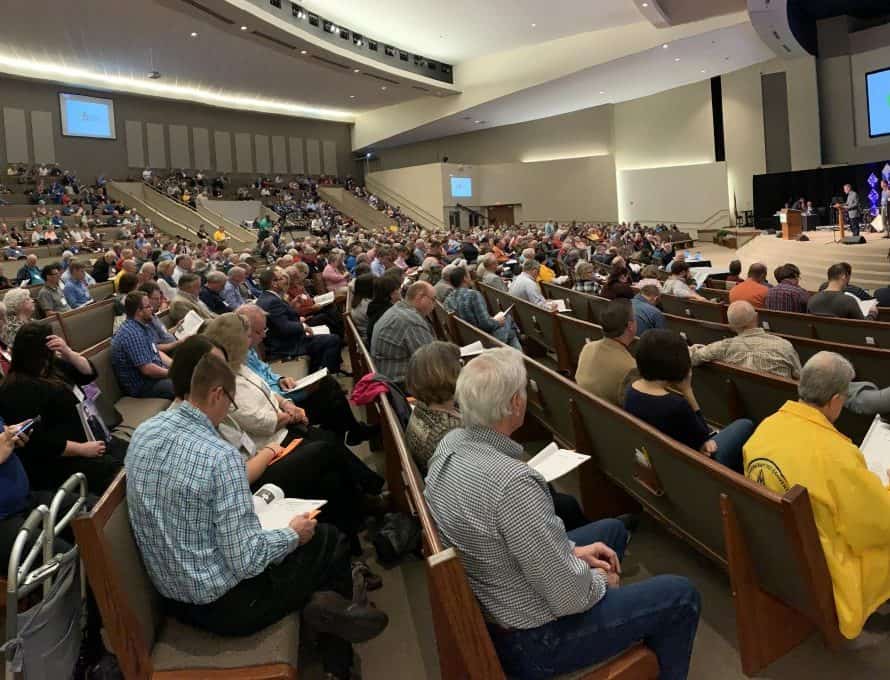 SPRINGFIELD — Missouri Baptists often filled the hallways and gymnasium at Crossway Baptist Church, Springfield, where they could fellowship with friends from across the state in a hospitality area and browse through a variety of exhibits or purchase books from a LifeWay Christian Store Booth.

The Pathway interviewed several Missourians as they enjoyed the annual meeting and met friends.

“We come for the fellowship,” said Ruth Easter of Buffalo.  She and her husband were sipping water in the hospitality area.

“It has been a couple of years since we attended,” said her husband, Roger Easter, who serves as the interim pastor of Prospect Baptist Church, Niangua.

“Younger people are taking the leadership roles and that is uplifting,” he said. “We were really inspired to see the Praise Song music group of Hannibal-LaGrange University.”  John Francis, their director, is a friend of the Easter family.

Pastor Easter said the gospel songs mean more to him now since he survived a near-fatal heart attack a few years ago.  “It was the widow-maker,” he said.  He recounted seeing a bright light and he was looking down on the medical personnel working on his body.  “I saw angels before me.”  But he said the Lord saw fit to revive him and he now “knows how real God is…I have been there with Him!”

Mrs. Easter said, “He shares the Lord now with more of an urgency.”

Director of Missions for the Ozark Prairie Baptist Association, Lockwood, Steve Williams said he had really enjoyed Herb Reavis, who preached at the MBC Pastor’s Conference.  “His delivery style draws you in to the Bible truths and then he would make you laugh,” Williams said.

At the Pathway booth, Chris Cox, pastor of First Baptist Church, Hardin, said he appreciated the efforts of MBC disaster relief workers, led by Gaylon Moss, who was standing in a nearby booth.  In 1993 the town of Hardin was surrounded by Missouri River floodwaters and part of a town cemetery was washed away, graves disturbed and caskets floated away.  Disaster relief workers helped them and Cox said their church is supportive of DR efforts.

He is the son of a long-time Missouri pastor, Walter Cox, and he grew up as a preacher’s kid in several northern Missouri towns: Buckner, Booneville, Hardin, Winigan and Chillicothe.  For many years he was in the newspaper business and was the general manager of the newspaper in Chillicothe, before entering the ministry.

Charles McLain was just getting to the convention and stopped by the exhibit hall first.  He is the pastor of First Baptist Church, Festus-Crystal City.

Asked what he considered the best asset of the convention is, he replied, “The state staff.”

“They are excellent leaders. They know their stuff and they are friendly and willing to help,” McLain said.

The FBC Festus-Crystal City church has a few folks involved in MBC disaster relief and they support their efforts, sending some folks to North Carolina and to Florida for hurricane relief.

He added, “This is a network of Baptists. New and old friends are here.”

One of the popular spots was the Minnesota-Wisconsin Baptist Convention booth where state convention staffers were giving away slices of Wisconsin cheese and Minnesota apples.

Leo Endel, executive director of the MWBC sat down with a Pathway reporter and said they were glad to visit Missouri Baptists who are in a partnership with their state convention.

“There is a continuum between these three states (Missouri, Minnesota and Wisconsin) that shares some of the same religious groups in the cultures of each state.  Yet the strength of the groups almost reverses itself as you travel between them.  For example in Missouri, evangelicals and Southern Baptists are strong, yet you have a few Catholics and Lutherans among your German immigrant towns like Hermann, Missouri.  But up in our states, Catholics and Lutherans are much stronger and evangelicals are a very small minority.”

He continued, “There is a unique affinity there. Missouri Baptists may understand Catholics and Lutherans in our states because they are neighbors to some of them down here.”

Endel quoted a survey by the Glenmary Research Institute which said in Minnesota only 6% of the population are evangelicals.  In Wisconsin, it is 4%.  Southern Baptists are a very small percentage. Many people in those two states claim no religious affiliation.

“We need encouragement by being connected to other churches,” Endel said.  “Many of our pastors live as much as an hour or maybe two hours away from the nearest fellow Southern Baptist pastor.  It’s not like it is in Missouri, close to other Baptists. We like it when Missouri churches form partnerships with us and come help us and encourage us.”

He said they have tracked 25 MBC mission teams who have come up in the first year of the mission partnership.  An example is Pisgah Baptist Church, Excelsior Springs, who has been assisting the Emmanuel Baptist Church, Rochester, Minnesota.  They put on 25 gallons of paint  on the interior of the Emmanuel church, a much-needed facelift of a facility that was showing it’s age.  The Pisgah church even brought professional painting contractors with them to do the renovation.

The Emmanuel church has been a flagship church for the MWBC in years past. But they had declined to an attendance in the 30’s. A few years ago Endel asked his board if he could take on the church as pastor while leading the convention as well.  They have been able to turn things around and now have about 80 attenders.  He said the Missourians were a great encouragement to their small church.

The geographic closeness of Missouri to the two states lends itself to a strong partnership, Endel added. “It’s a day’s drive to come up and s