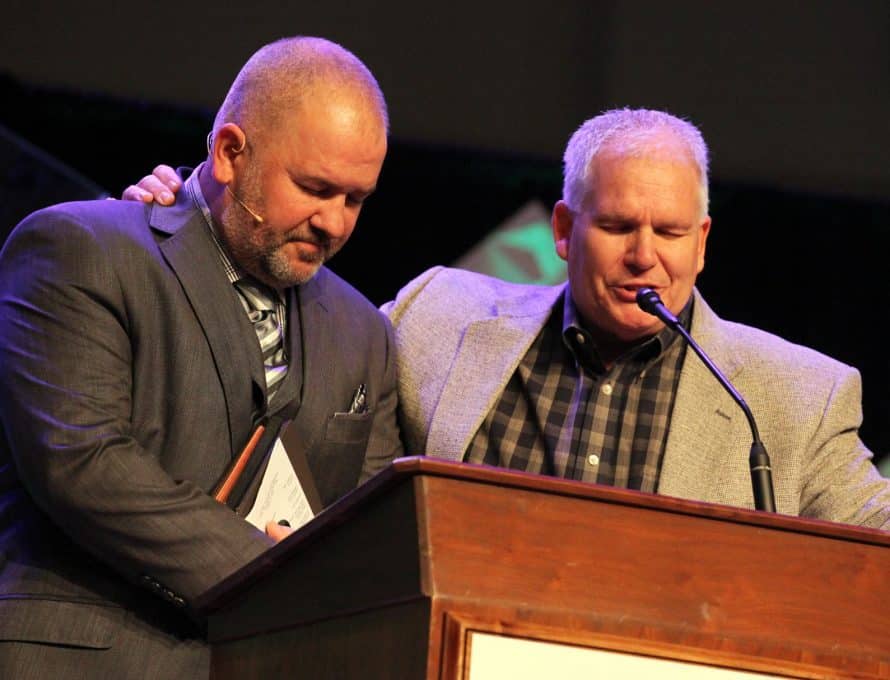 SPRINGFIELD – Pastors from around Missouri gathered at Crossway Baptist Church here Oct. 22 for the annual Pastor’s Conference, which took place prior to the Missouri Baptist Convention’s Annual Meeting. It was a time of teaching, reflection and inspiration.

“Dwight Moody wasn’t educated beyond junior high school, was never ordained, and often misspoke. Yet he took two continents and shook them for the Kingdom,” Reavis said.

“A man of God … is a servant of God touched by God with the power of God.”

Later in the day, during another sermon, Reavis spoke from Acts 16:16-30 about what interrupts the flow of the Holy Spirit and what ingredients can stir revival.

“Revival is not for the lost, it is for the saved. Only the ‘vived’ can be ‘re’-vived. The lost people need a resurrection. People say revivals don’t last. I say, ‘Neither does deodorant, but it helps.” And the ingredients for revival are prayer, praise, and passion.

In Acts 16, Reavis said, the slave girl had a false profession of faith.

“She had the words on her lips, but not in her heart. If you expect and desire revival in the church, Christians must stand up to those who stand against the flow of the Holy Spirit. The dead have controlled the church for too long. Doctrine cannot be based on feelings and experiences, but on the word of God.”

Reavis said apathy and traditions also block the flow of the Spirit. “Since I’ve been saved, no one has sent me a card to tell me to show up for church. Revival is when God rends the heavens to give a fresh revelation of His presence.”

• Don’t settle. “Many of us settle for less than what God wants,” he said. “I’ve had some sermons where I felt I ought to go to the congregation and apologize, promising to do better next Sunday. We marginalize young pastors and it compromises them to be like us.”

• Don’t be distracted. Pendergraft said there are many distractions to delivering God’s word. He said Paul didn’t let anything keep him from the “one thing” (verse 13) – namely, serving Jesus. “Some of us fall prey to the seduction of hearing our name rather than speaking His name. We need men sold out for Jesus.”

• Don’t turn around. Paul didn’t worry about the past, but kept advancing. “The unsaved are uncontrolled by their past; the Christian, by what is forward,” Pendergraft said. “We have the same Holy Spirit as Paul. Others will not be free until we lead the charge.”

• Don’t quit. “We quit far too easy,” he said. “Pray that God gives us men with backbone.  What we do and say in the pulpit, hallway and in private ought to be the same. How dare us ever throw darts at a struggling brother. We need each other.”

• Don’t forget. Pastors must not forget their faith and their Savior. “Bible history is rich in people starting well and failing to keep the rules of God,” Pendergraft said. “They don’t lose their salvation, but they lose their reward. It happened to Samson, Saul, Ananias and Sapphira. It can happen to you.

“Hell is still forever,” he added. “So is Heaven. We have been redeemed, accepted, preserved, chosen, and regenerated.”

Bumpers reminds pastors they are ambassadors for Christ

Eddie Bumpers, pastor of Crossway Baptist Church, Springfield, reminded those at the Pastors’ Conference they are ambassadors for Christ.

“You represent Jesus Christ, who saved your soul,” Bumpers said. As Christian ambassadors, Missouri Baptists “go in His power, proclaim His message, show His compassion, depend on His provisions, and exalt His name.”

“The disciples did what Jesus would do,” he added. “Authority is the right to do that. Sometimes there are freelance ambassadors. They are self-appointed and go on their own. …

“We don’t have to make up our own message. The word of God still changes lives. The kingdom came when King Jesus came. We tell people, ‘You can be part of that kingdom.’ We get the chance to proclaim His message, not ours.”

Like Jesus, Bumpers said, Christian ambassadors should be “moved with compassion toward people.”

“Some pastors say they don’t like people,” he said. “Ministry is people. We represent the Christ who loves people.”

Christ Jesus provides for His ambassadors, he added. “Understand the sense of urgency. Don’t get bogged down with things. Travel light and trust God.” The disciples acknowledged in Luke 22:35 that they lacked nothing as they served the Lord.

Of course, he said, not everyone will welcome the gospel Christians bring, Bumpers said. But ministers must shake