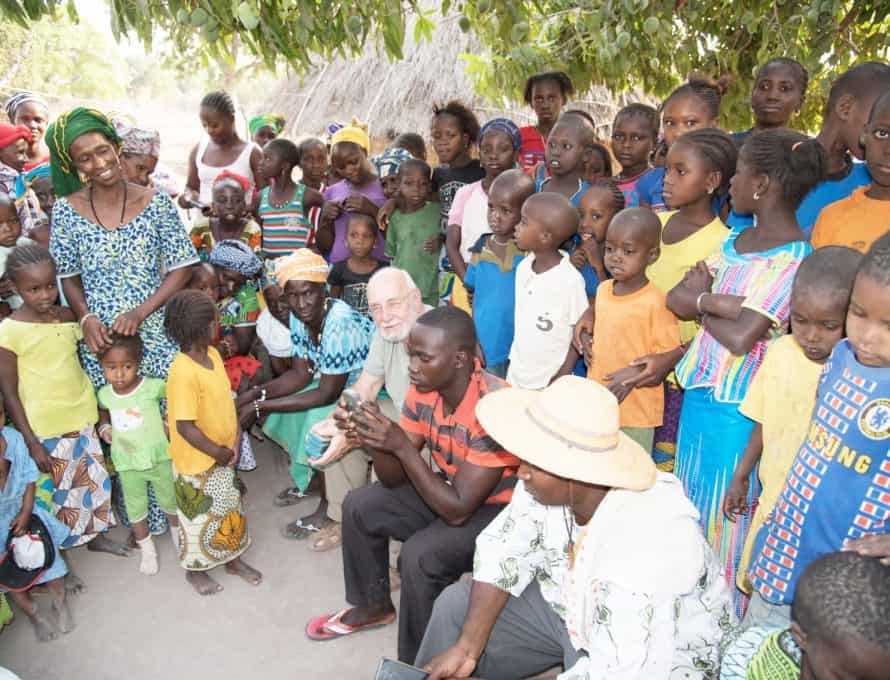 WEST AFRICA – Jim Nicolls of First Baptist Church, Arnold, sits amid a crowd in a West African village as they listen to stories from God’s Word via an electronic audio device called a MegaVoice. Photo courtesy of Jim Nicolls

ARNOLD – Jim Nicolls thought he’d just been broken for the people of northern Mexico. Surely, that’s why he wept through the night during his first mission trip in 2000, when he led a construction crew in building houses at a squatter’s camp along the U.S.-Mexico border.

“That first night, I just laid there all night, weeping,” he recalled. “God broke me. I kept saying, ‘Why, God, am I here, and they’re there?’”

But God was working more deeply in his Nicolls’ heart than he realized at the time. Although he was indeed broken for the poor people of northern Mexico, God was soon to give the now 83-year-old missions coordinator at First Baptist Church, Arnold, a completely new calling in life. Beginning that night, his desire in life began to shift to the single purpose of taking God’s Word to lost people around the globe.

Nicolls had volunteered only hesitantly to go on that first mission trip to Mexico in the month of September, 2000, but when it was over he was eager to return. That December, he went back to the country. And the following year, he led six teams to the area.

By 2002, Nicolls closed down his small IT business and devoted himself to missions, and in 2005 First Arnold invited him to help lead the growing missions program at the church. Shortly before joining the church staff, he started going deeper into Mexico. And he was just then learning from Henry Blackaby’s Experiencing God how to “find where God is working and join Him.”

He didn’t realize that, only a few years later, he would be joining God in West Africa.

“The level of lostness was greater there,” he said. “The culture was different.” Though Islam was prominent in the region, individuals from an unreached people group there would tell him, “We’re not Catholic. We’re not Muslim. We’re nothing, and we need to be something.” The people were animistic, fearing and worshipping demons. They were also illiterate – and at the time, they had no written language whatsoever.

For that reason, they often shared oral Bible stories to evangelize and to train up new believers. But there was a problem: Although new believers in the area tried to learn the Bible stories, they weren’t able to remember them long-term.

Fortunately, Nicolls soon discovered a tool that would help the church invest more effectively in the people on a long-term basis. Namely, he found MegaVoices – a solar-powered device, roughly the size of an iPhone, that could carry audio translations of Bible stories. So, in 2012, the church began translating a chronological set of 70 Bible stories that would serve as an oral introduction to Scripture among this people group.

Not only do these MegaVoices allow Christians in the region to meet together and learn from the Word of God, but it also gives them an opportunity to evangelize. Sometimes, mission teams go to an evidently unreached village only to find that the MegaVoices are already there – distributed by indigenous Christians from other villages.

So far, First Baptist Arnold has created MegaVoices in nearly seven West African languages, distributing well over 1,000 of them in villages across the region. And, in doing so, they’re doing much more than giving high-tech devices to these unreached people groups. They’re giving them the Word of God.

And in 2014, Nicolls realized just how powerful God’s Word is. In one village, he used MegaVoices to share four Bible stories with a group of 23 men. After each story, they asked the men, “Is there something about this story you need to be obedient to?”

As a result, he added, “My faith has gotten so strong and my relationship with Jesus has strengthened. I’ve recognized literally – I’ve always known, with head knowledge, that Jesus is alive and the Holy Spirit is here. But when you experience that in such a powerful way, it has to affect your life. … Now every time that I encounter something that I don’t like to see, I understand that God’s in control. He’s allowing those things for a purpose. He has a purpose for my life, and I don’t know what that is yet. I’m 83 years old, and I still don’t know what he wants me to do. But, as long as He keeps this body working, I’m going to continue seeking His will and seeking His guidance in His life.

“Seeing God work in that kind of way has given me the understanding of the power. It’s just not a bunch of stories written in a book about God. It’s just not a historical record, as accurate as it is. There’s power in God’s word. … The Spirit of God working through His Word is doing amazing, amazing things. And that has to affect every aspect of your life.”