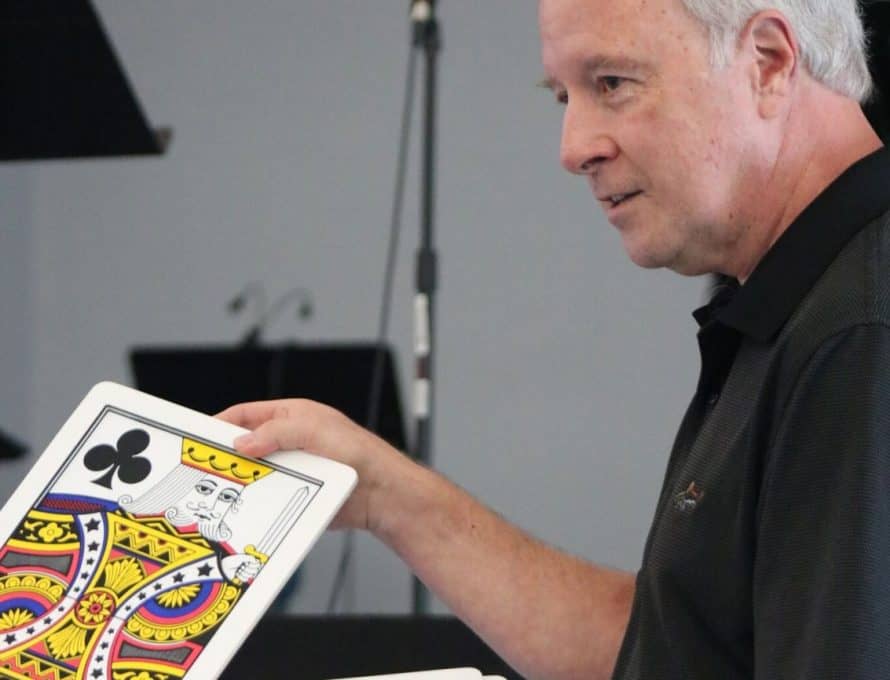 JEFFERSON CITY – The stage is dark. Rick Branstetter appears before the audience, garbed all in black, sporting a tall black hat with a large red band and a black cape with red lining. He holds a large book with two words emblazoned in brilliant gold letters on its front cover: “Holy Bible.”

“In the beginning, it was dark,” he says. “The Bible tells us it was dark. God looked around, and God said, ‘Let there be light!’”

“And ever since then,” he continues, “the Word of God has brought light to men. Men, who are living in darkness, look to this light. They want to see. They want to learn about the light.

“In fact,” he adds, “the prophet Jeremiah tells us, the Word of God is like fire.”

With these words, flames shoot forth from Branstetter’s open Bible.

This gospel-magic act has opened many of Branstetter’s performances throughout Missouri. Although his shows are aimed at entertaining and evangelizing people of all ages, his flair for gospel magic is rooted in his love for children and his desire to share with them the light of God’s Word.

Branstetter, who attends Concord Baptist Church here, has been ministering to children since he was 18 years old. This ministry hasn’t been continuous – being broken, for example, by a year-long stint in Vietnam, where he flew in some 300 operations as an Air Force pilot; however, his ministry to children has been consistent through the years.

He began using gospel magic while teaching Sunday School to fifth-graders in Chicago, where he taught none-other- than the young Kirk Cousins – the NFL quarterback and outspoken Christian who signed with the Minnesota Vikings earlier this year after three consecutive 4,000-yard passing seasons with the Washington Redskins.

But Branstetter takes no credit for Cousins. In fact, as he remembers the boys he’s taught throughout the years, his mind often goes to a little boy who – far from ending up as a Christian witness with a national spotlight – landed instead in prison several times. The boy was in one of his first Sunday school classes, and he was a trouble-maker. Frustrated with his disruptive attitude, Branstetter – who was then only a college student – asked that he be removed from the Sunday school class. It’s a decision he’s regretted ever since.

“In hindsight,” Branstetter said, “I should have said, ‘I want the rest of the kids gone, and I’ll keep him so I can work with him and help him.’ … That probably set the tone for me from then on.” Since that time, he’s committed to finding ways to reach out to boys who are disruptive or hard to reach for one reason or another.

But his ministry to children extends beyond the Sunday School classroom. After retiring from a business career, he spent five years teaching Middle School children in Jefferson City about the dangers of meth. Using this drug, he told the teenagers, is like plugging a TV into the 220-outlet commonly used for ovens, dryers or other high-powered appliances. “The TV will come on and then be destroyed immediately,” he said. “It’s scary. You want them to be aware that it is available and it is free – the first time. It will work, and you will be hooked. And your life is over.”

Branstetter and his wife have also fostered 22 children for the past 15 years, and have served as respite care providers for other foster parents.

On at least a weekly basis, he also mentors boys, many of whom don’t have father-figures in their lives. Public school teachers or leaders at the local Boys & Girls Club would sometimes contact him to tell him about a boy who needed a mentor. On one occasion, a single mother called Branstetter, asking him to mentor her son. Unfortunately, he already was mentoring another boy and prefers not to commit to two boys at once. So, at first, he had to tell her, “No.” But after some time, she called him back with a specific request: “I don’t know how to teach him how to shave,” the mother said. “Would you teach him how to shave?” So he did. Then, later, she called back with another request. But by that time, Branstetter was open for mentoring her son.

“And it keeps on coming,” Branstetter said. So far, he has mentored eight boys. Alongside this ministry, Branstetter continues to teach children at the Mothers of Preschoolers ministry at Concord Baptist Church, Jefferson City. In each class, Branstetter uses a marionette rabbi to teach them words from the Hebrew Bible – like “Shalom” – and to help them understand how they can become disciples of the Rabbi Jesus, the Messiah. And, of course, he often uses his gospel magic tricks to entertain and edify the children. During the first class of the year, he amazed his young audience as flames shot forth from his large Bible. But, more importantly, he displayed for them the life-changing light of God’s Word.