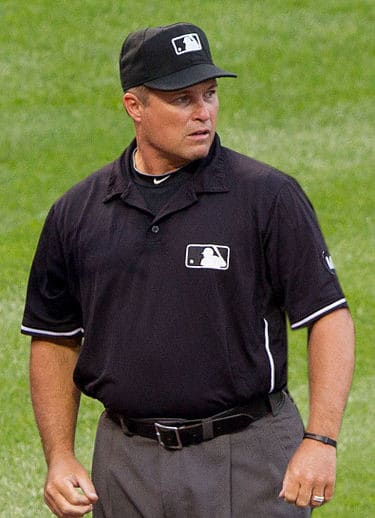 ST. LOUIS – Marvin Hudson’s goal is to never be the highlight of a game.

But sharing his testimony at South County Baptist Church here before taking his place behind the plate at the Sept. 16 Cardinals-Dodgers game, Hudson, a Major League Baseball umpire, said he knows what it’s like to stand out for exactly the wrong reason.

A former college catcher, Hudson worked his way up through the minor leagues as an umpire. Eventually, he was promoted to call games during Spring Training and in 1999 made it to the Big Show. He’s worked the 2004 All-Star Game, a host of division and league championship series as well as the 2016 World Series – a job for which he earned a ring nearly the size of, well, a baseball.

A member of First Baptist Church in Washington, Ga. (the former church of South County’s senior pastor, John Childers), Hudson recalled one of his biggest professional mistakes – a time when he let himself, his family and his God down despite being right on the field.

More than a decade ago, Hudson was behind the plate when a manager took exception to one of the umpire’s calls (Hudson prefers to keep the team and manager anonymous).

“I look over and he has pole vaulted out of the dugout, and we just have a good old fashioned argument,” Hudson said. “Nose to nose, going at it nice and rough.”

After a few choice words from the irate manager, Hudson began to lose his cool. In a moment of frustration, he delivered a choice word of his own right back in the manager’s face.

It wasn’t his finest moment, but “it seemed to satisfy him and he left,” Hudson said.

The game continued and Hudson thought nothing of the argument or his response. That is, until later that night when he got a call from one of the ministerial staff at First Baptist, Washington.

“He said, ‘Marvin, I just want you to know that everyone at church is praying for you.’”

What Hudson thought was audible only to those on the field was still able to be read on his lips, and the zoomed-in clip was the leading highlight on SportsCenter that night.

“There was no doubt what I said.”

As scandals go, it wasn’t exactly a bomb shell. No one in Major League Baseball was blown away by salty language on the field of play, and it’s no secret that even committed Christians fall far short of perfection. But as a vocal believer who makes an effort to be a testimony for Christ on and off the field, Hudson said the moment in the spotlight was mortifying.

“It was one moment,” he said. “I just let myself down, I let my family down, and most importantly I let God down. I’m a representative of my Lord and Savior, and I let him down.”

So while his moment in the spotlight was more infamous than he would have liked, Hudson said it did teach him a valuable lesson: whether it’s baseball or everyday life, pursue God-honoring lives – because someone is watching.

A totally different situation reinforced that lesson that you never know who you might be influencing. During Spring Training this year, Hudson was working a game in Florida. About five rows into the crowd, a boy – Hudson guessed him to be about 10 years old – began yelling his name.

Hudson was polite, said hello, and continued to his first assignment of the game, first base (in Spring Training, umpires take three-inning shifts at a position). As he rotated from first base to second to third, he felt the boy staring at him, making eye contact in between plays. When the game was over, the boy was not interested in an autograph from the big league stars; he wanted to meet Hudson.

It turned out that Hudson – not some homerun hitter or an ace pitcher – was a star in Little Marvin’s eyes, and had been for two years.

“His mom told me he studies everything I do,” he said.

The umpire grabbed a ball, took a picture with the boy, signed it and included the inscription the reference to Psalm 91:2, Hudson’s favorite verse: “I will say of the LORD, “He is my refuge and my fortress; My God, in Him I will trust.”

Two weeks later, Hudson got a letter from Little Marvin. He thanked Hudson for the ball, the photo and the chance to meet his hero.

“You never who is watching or who you will get the chance to influence,” Hudson said.