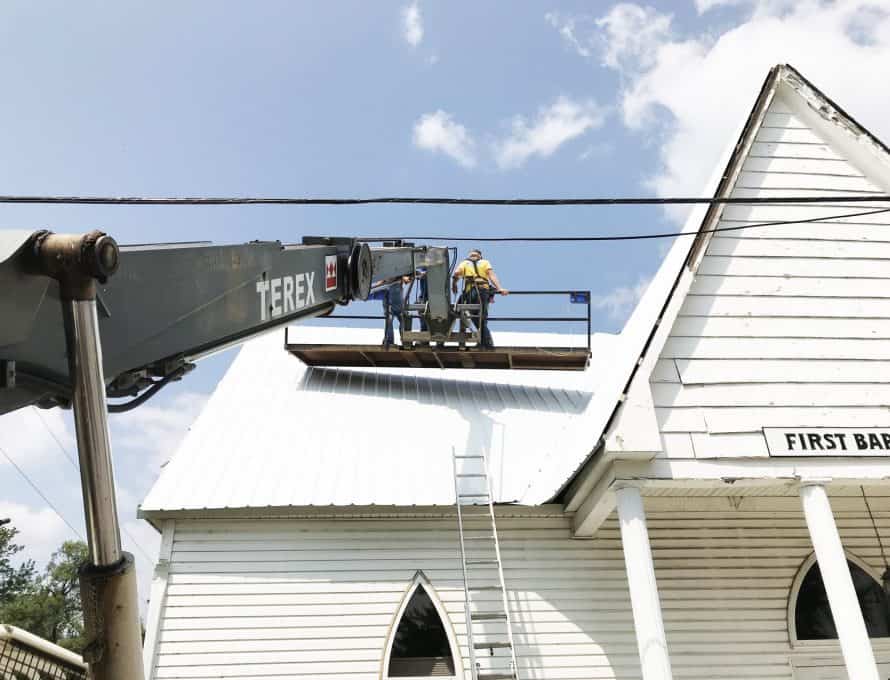 CLARENCE — The First Baptist Church received help from about 12 churches in Missouri as the re-roofed their church building in this north Missouri community. The roof was very steep and initially volunteers were skeptical about getting on the roof, but they were able to recruit volunteers who would stand on a boom lift and replace the 5 layers of shingles with steel roofing materials. The project took about 11 months and was done in four stages and finished by the Missouri Campers on Mission group in early September. Pathway photo by Richard Nations

CLARENCE — When the pastor of the First Baptist Church looked at the roof on their over 100 year old building he was dismayed to find five layers of shingles. Four of them were asphalt and one layer was wooden shake shingles. The roof is very steep and Pastor Jerry Lillard did not know how in the world he was going to find volunteers to tear off the old layers and replace the roof.

To have the roof replaced with commercial roofers would have cost about $15,000 for labor alone he estimated. The metal sheet roofing materials needed were about $8,000.

The church was able to save money for a few years in order to purchase the materials but they would have needed to save money for several more years to pay for the labor to install it. The roof would not wait that long. They put out the word for volunteers to come and help. That was in the fall of 2017.

At first it seemed no one wanted to touch the volunteer project. People would come and take a look and say “That is too steep for our volunteers.”

Pastor Lillard said he worked with the Thousand Hills Baptist Association to put out the word that volunteers for the roof as well as a ground crew were needed. The church was able to rent a “boom lift” which made a stable platform for volunteers to stand on as they tore off the old roofing materials and then screwed on metal sheets.

Pastor Lillard said they were able to obtain the roofing materials through a fellow Baptist in Unionville, Leon Weekley who delivered the materials that were purchased in Bloomfield, Iowa. Mr. Weekley and some volunteers from Broadlawn Baptist Church, Unionville helped kick start the project last fall along with several other Thousand Hills and Bethel Baptist Association volunteers.

Lillard said “I think it is wonderful when other churches see a need in a small church and are willing to spend their time to help a church.”

He said about twelve churches from across northeast and central Missouri helped with the project which was done in four phases last fall and again this summer and fall.

The project was finished when the Missouri Campers on Mission group came up from Columbia and put the last quarter of the roof on in early September.

“Last summer we had some men from Crooked Creek Baptist Church, down by Shelbina helping,” said Lillard. “But it was hot as can be that day and we measured the temperature at about 120 degrees up on the steel roof, so we called off the project and waited for cooler weather in the fall” he added.

Lillard said “The roof pitch was so steep you could have nailed 2×6 boards on it and stood upright to work if you needed to.” He was glad they are able to rent the boom lift so the volunteers had a stable platform to work on as they put the roof panels in place.

“We don’t have many younger people in our church. But bless their hearts, we had some volunteers who were 70 and 78 years old up there working all day long. Those guys went after it like they were killing snakes,” Lillard said.

During this project they also needed to reach out to the children in their community. The mostly older congregation of about 10 people had no children coming to Sunday school or worship. But the youth and children’s ministry pastor of nearby First Baptist Church, Macon, saw the need and offered to come over in the summer and have vacation Bible school. Pastor Christian Abernatha and Worship Pastor John Snider brought volunteers and children from their church to reach out to the Clarence community. They had a great VBS and reached several children.

“If you want to get uplifted by the Holy Spirit, then come to VBS with those kids,” Pastor Lillard said. “They were singing with such joy. The church brought bounce houses and VBS materials and those kids had a blast,” he added.

He said they had about 30 kids from Clarence and Macon in the church that week.

Pastor Jerry’s eyes were sparkling as he listed off the churches that helped with the year-long project. He especially wants to extend credit to the First Baptist Shelbina; Crooked Creek, Shelbina and Broadlawn Baptist, Unionville churches. And he said they probably would still be working on it if the Campers on Mission group, led by Stanley Casady, of Columbia, had not offered to finish the task in late August and early September.

Lillard says they are now going to put some siding on the building next year, but he though that would be a breeze compared to the extremely steep roof replacement project. He thanks everyone for their help and for the prayers as their church is now in the dry and ready to meet more children and young people in the Clarence community. ν