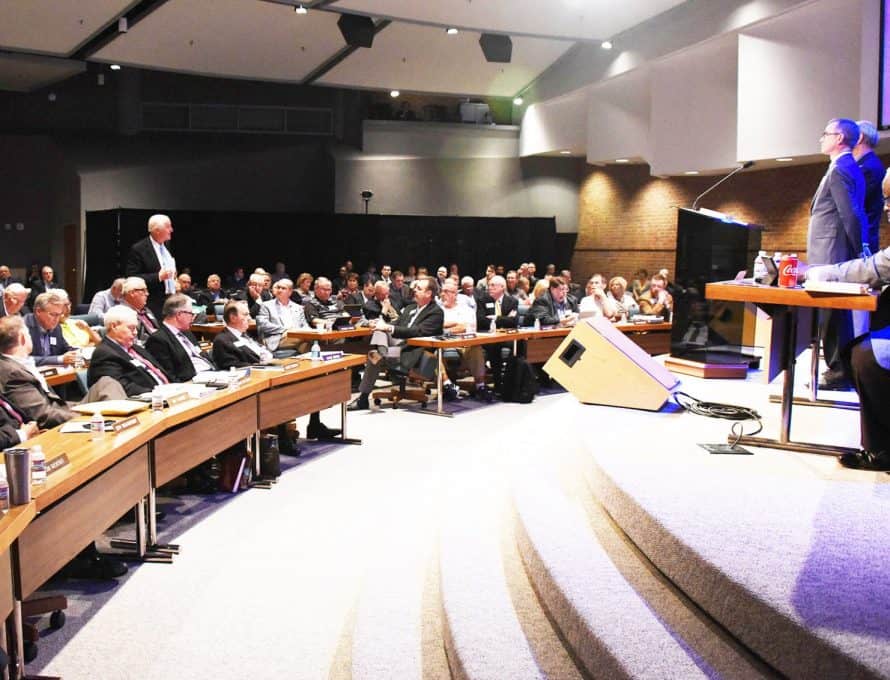 NASHVILLE (BP) – An initiative by Southern Baptist Convention President J.D. Greear to address sexual abuse in the church will be funded by the first $250,000 in Cooperative Program overage for 2017-2018, by a vote of the SBC Executive Committee.

Other highlights of the Executive Committee’s Sept. 17-18 meeting in Nashville included a report from the EC presidential search committee and a report on Southern Baptist Disaster Relief following Hurricane Florence. Two retiring leaders of Baptist state conventions were honored with resolutions of appreciation.

In appropriating money for Greear’s Sexual Abuse Advisory Study, an initiative in conjunction with the Ethics & Religious Liberty Commission, the EC acted on behalf of the SBC “to provide two years of funding … to study ways to address sexual abuse and related issues in a church or ministry context,” according to a recommendation approved by the EC. The funding will be drawn from an anticipated $5 million overage from the 2017-2018 CP Allocation Budget.

The EC’s officers were authorized to approve additional funding for the sexual abuse study up to $50,000 if necessary. The study’s proposed reports, recommendations and resources must be presented to the EC no later than Feb. 1, 2020, according to the recommendation.

EC chairman Mike Stone said the study is “the next step in a trajectory we’ve been on for a while” to address sexual abuse.

“There’s never, in my estimation, been a hesitancy about addressing these issues” in the SBC, Stone, pastor of Emmanuel Baptist Church in Blackshear, Ga., told Baptist Press. “We see in the culture and in the media an increased emphasis on this issue of sexual abuse. So I think it’s time for us to take that next strategic step.”

A budget proposal submitted to the EC by the ERLC projected the study will include three phases:

• Development of partnerships with seminaries, state conventions and churches; and

• Implementation of the study’s recommendations.

The EC’s Business and Finance Committee urged the ERLC to work closely with Baptist associations to ensure all churches have ready access to resources developed.

The EC’s presidential search committee has been narrowing the field of candidates and will conduct interviews and background checks in the coming months, search committee chairman Steve Swofford reported.

While seeking to be “expeditious” in its search for a successor to Frank S. Page, who resigned in March, Swofford said the committee feels no pressure to rush to completion.

“Anything you hear about who [the presidential nominee is] that does not come from us through Baptist Press is rumor,” said Swofford, pastor of First Baptist Church in Rockwall, Texas. “So we hope you will not believe” rumors.

The committee has prayed, developed a position profile and received resumes, Swofford said.

Instead, the EC will recommend to 2019 messengers that trustee training guidelines be expanded to remind trustees of their responsibility to the entire SBC.

“Entity administrators should reinforce with their trustees the principle that entity trustees are to represent the interests of the entire Convention as well as those of the entity,” the guidelines would be amended to include, as recommended.

The EC postponed indefinitely, with a request to reconsider in February 2019, a separate messenger recommendation to strengthen trustee training.

• The EC appointed Carolyn Fountain to fill an unanticipated vacancy on the Committee on Order of Business. Fountain, a member of Franklin Avenue Baptist Church in New Orleans, was appointed to serve through 2021. The vacancy was created when a previous Committee on Nominations appointee declined to serve.

• The EC adopted a memorandum of understanding that the body will use the title Associational Mission Strategist when referring to an associational leader cooperating with the SBC, unless otherwise directed on an individual basis. The new name aligns with a title change adopted in June by the Southern Baptist Conference of Associational Leaders and recommended for use uniformly across the SBC.

• The EC added “Baptism Day” to the SBC calendar, requesting that NAMB serve as the sponsoring entity and encourage the calendar addition’s effectiveness.

• The EC declined a request to study the feasibility of participation in SBC annual meetings from remote locations. Among the reasons stated, “the present ‘public’ method of casting ballots involves some level of ‘in-person’ and ‘eye-witness’ assurance that ballots have been received and cast only by qualified messengers.” ν