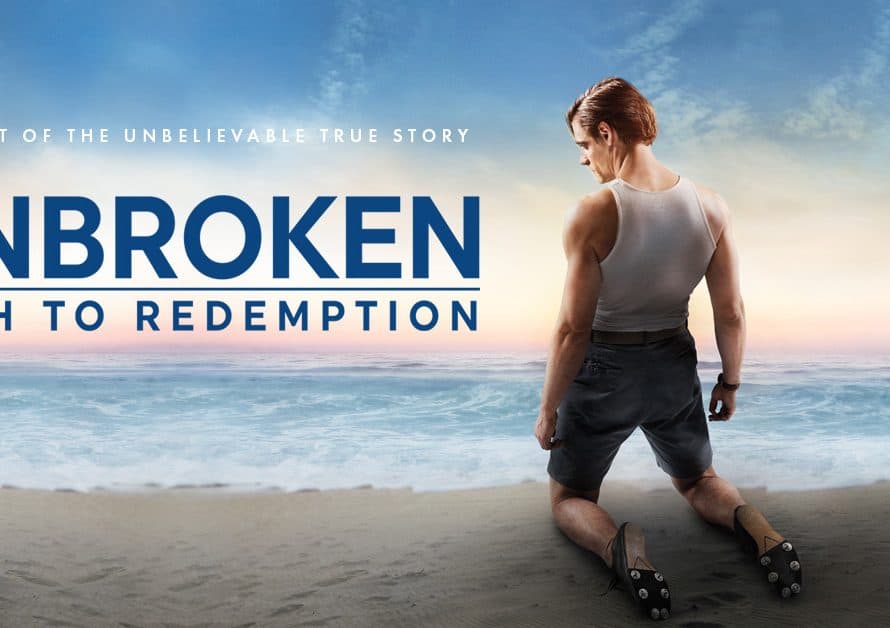 I’ll get this out of the way quickly: “Unbroken: Path to Redemption,” is a better-than-average movie. It’s worth your $10 to go see it.

After being thoroughly depressed by another movie with “broken” in the title (still-in-theaters “God Bless the Broken Road”), I was prepared to sit through another 90 minutes of shoddy workmanship with a thin, Christian veneer tacked on as an afterthought. Just two or three minutes into Unbroken (I refuse to write out again that unnecessarily cumbersome full title), it’s clear that we’re in for a much smoother cinematic ride. The fact that my only real complaint is the unwieldy title speaks volumes.

To be fair, there’s a reason behind that title. This film is the sequel to 2014’s “Unbroken,” the true story of Louis Zamperini. Both take material from the bestselling book, “Unbroken,” by Lauren Hillenbrand. The first movie, directed by Angelina Jolie, follows Olympic track star Zamperini as he heads off to war and crashes into the Pacific. He and his crew fight off sharks and starvation for 45 days on light rafts before being found by the Japanese navy. Ultimately, he spends nearly two years in a POW camp enduring torture and unspeakable conditions at the hands of the top prison guard, Watanabe, or, “The Bird.” It was “fine” as far as World War II movies go, but was nothing special.

Back in 2014, I wrote that “the best thing I can say about the movie is that it is good background for the rest of Zamperini’s story. It’s his story after the war, when he was battling alcoholism, PTSD and hatred for his captors that needs to be told. He reluctantly attended a Billy Graham crusade, heard the Gospel, and was set free. You might even say he actually was broken, but was later made whole.”

Somebody at the production company Pure Flix must have stumbled across my blog, because this second “Unbroken” tells the rest of the story that was conspicuously absent from the first. With a new cast and definitely new story tellers, we see the highlights of Zamperini’s crash and flashbacks to “The Bird” and his cruelty. Though Louis (Samuel Hunt) has found love with Cynthia (Merritt Patterson), his past trauma haunts him. His only saving grace – running track – is pulled out from under him. He can’t sleep, has trouble finding work, begins to self-medicate with whiskey, and spirals out of control. “God is my enemy,” he tells his wife. As mentioned above, he stumbles into a Billy Graham crusade and begins to get the idea that maybe, just maybe, God isn’t his enemy, and perhaps “The Bird” isn’t either.

The quality of the special effects on display during these flashback scenes are heads and shoulders above what I’ve seen in a “Christian” movie (even if there are too many of them, which works to pad the movie’s length a bit too much). There are no real standouts in the acting corps, but no one sticks out like sore thumb, either. Scenes of Zamperini descending deeper and deeper into alcoholism ring true. The conflict he feels when presented with the gospel is nuanced, and the payoff satisfying.

Perhaps the most fun to be had are the scenes at the Billy Graham crusade, with the famed evangelist portrayed by his real-life grandson, Will Graham. At first, I was distracted by just how goofy and lanky Will looked in his too-big suit. However, black and white photos of the real Zamperini and Billy Graham from the late 40s that run throughout the credits confirm that the younger Graham absolutely nails the look and the speech patterns of his late grandfather as he proclaims Jesus. Most movies depicting a sermon go out of their way to be as generic and nondenominational as possible so Christians of any stripe can relate; Graham’s sermon is recreated here word for word, so it rings much truer to this Southern Baptist’s ear. Kudos to whoever made that decision to stick with reality.

I don’t know that this movie will spark a revival and cause thousands to turn to Jesus, but it might help trigger conversations, much like “I Can Only Imagine” did this spring. Regardless, it brings me pleasure to tell you that you can see this inspiring and uplifting movie about God’s forgiveness and see a decent film at the same time.

It should also be noted that Luke Zamperini, the son of Louis and one of the executive producers of the film, will speak at the Booster Banquet at Hannibal-LaGrange University, Nov. 7.

This second “Unbroken” is rated PG-13. There is no foul language and no sexual, content besides some women in relatively modest bathing suits. The flashback scenes can be jolting and disturbing, even if they aren’t bloody.