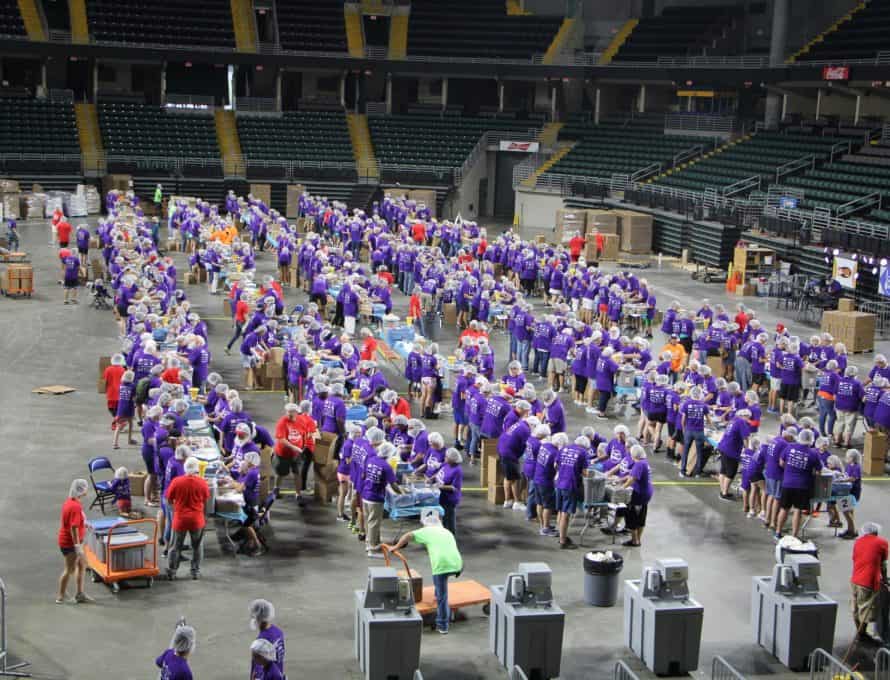 ST. CHARLES – More than 2,000 volunteers from various churches came together recently to prep 900,300 meals to be given away to those in need. Pathway photo by Vicki Stampsi

ST. CHARLES – Hunger is not usually considered an American need, but Sam Rowley, co-chair of Meals for a Million and a member of 2Rivers, said thousands in St. Louis wonder where they will find the next meal.

Several Baptist churches joined forces with the community to meet this physical need by packing a variety of meals through the two-day event held at the St. Charles Family Arena. More than 2,000 volunteers packed 900,300 total bags.  Each bag feeds 4-6 people.  The meals fortified with vitamins included: macaroni/cheese, cinnamon oatmeal, and beans with rice.

Rick Biesiadecki, event co-chair and Missouri Baptist Convention Executive Board member, said it is important for Christians to be involved in this project.  “We can partner with a lot of people to live out Matthew 5,” he said. “We should be the salt and light.  Being benevolent in meeting needs, earns credibility for our message.”

Bishop Phil Brownlee, pastor of Peace Tabernacle in St. Louis, is one of the points of distribution of the food.  “I’m president of the Pastoral Fellowship of St. Louis,” he said. “We were formed four years ago to focus on racial reconciliation, and we have 113 churches meeting monthly.”

According to Brownlee, the group consists of many small churches in the inner city.  “These small churches know the people in the neighborhoods who are suffering,” he said. “This food is a way to minister to many of the people who need it. When we feed them, we are able to talk to them about Christ.”

Biesiadecki had another reason for the importance of this ministry.  “It is near and dear to Jesus’ heart,” he said. “He wanted us to help the widows and orphans.  It is the central expression of real Christian ministry.  We earn the opportunity to proclaim the gospel.”

Brownlee agreed with Biesiadecki as well as his identification with the need.  “We need to show the love of Christ,” he said.  “I have a heart for the unchurched people.  I come from the streets, and I know hunger and trouble.”

The group is hoping to make this an annual event.  “This is bigger than us,” Biesiadecki said.  “St. Louis is now known for problems, but what if Christians stood together to make it a place of blessing.”

The Missouri Baptist Convention contributed $10,000 from the hunger fund to support the supplies for Meals for a Million.