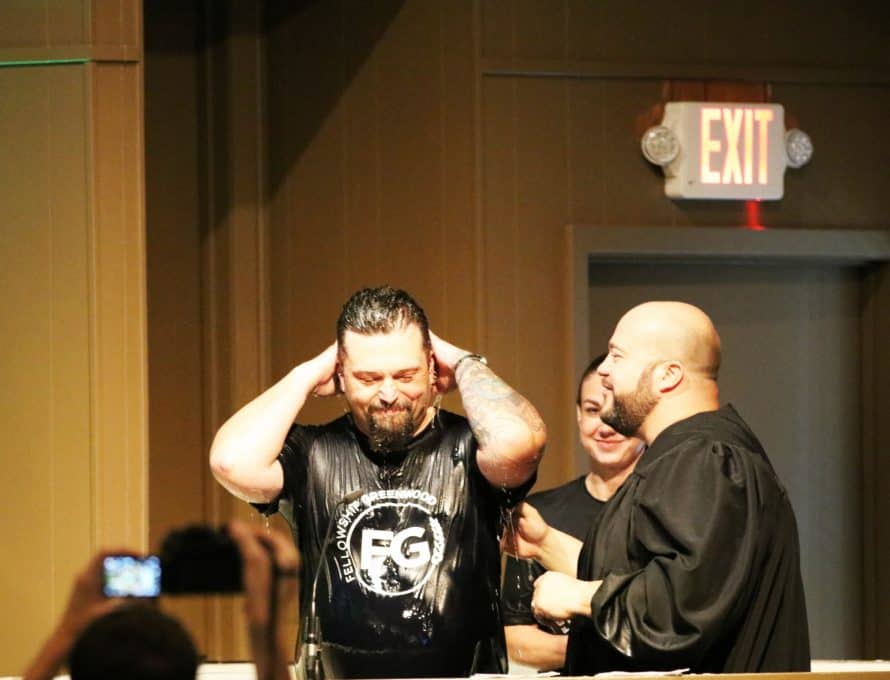 GREENWOOD – In the old days – just a few years ago, really – Fellowship Greenwood, originally a campus of Lenexa Baptist, “couldn’t buy a baptism,” as Lead Pastor Chris Williams says. The church was running over 150 people on a Sunday morning, but life change seemed absent.

A few years later, the picture couldn’t be more different. Each Sunday, over 700 people worship in the former FBC Greenwood building that is now home to Fellowship Greenwood. With 40 baptisms already this year, a robust discipleship process in place for new believers, and community outreach efforts all over the Metro area, the church is nearly unrecognizable.

This change didn’t happen overnight, though. It began with a deep sense of desperation among Williams and his leadership team, a longing to see God move and transform. That desperation permeated the congregation, leading them to pray fervently and strategically for God’s leading.

God answered that prayer, and not just their prayers, but the prayers of a generation before them. “Everything we’ve seen I can trace back to Tuesday 7 a.m. prayer group,” Williams says. “So many things are actual things we prayed for on Tuesday mornings. Going back to that original [FBC Greenwood] church, a few stayed with us, and some of them have been praying for these things for years.”

Out of those times of prayer, God pressed upon Williams and his leaders a renewed dedication to the greatest commands of Scripture – to love God, to love one another and to love their neighbors.

They began to live those things out in tangible, visible ways, starting with living out the “one another” statements in the New Testament. People began to notice. Young de-churched families grew curious about the authentic manifestation of faith they saw in this congregation.

The church also focused on loving their neighbor, both corporately and individually. Corporately, they sought to build relationships with the homes, businesses, and schools closest to them. They “lived to bless” the community, inspired by the instructions God gave his exiled people in Jeremiah 29:5-7.

Initially, they served the community in small ways, but year by year the community began to give them more responsibility. Now, they have thriving partnerships with Lee’s Summit and Greenwood, and the church forms the volunteer base for many of the cities’ events.

Eighty percent of their church members, however, don’t live in Greenwood. “We must live to bless our community, starting in our local Jerusalem, then have these centered circles to work ourselves out,” Williams says. He challenges each individual member to pick the eight closest homes to their home, encouraging them to “get to know them, serve them, build a rapport with them. One, because that’s what we do as believers; two, we want them to have the Gospel.”

Living to bless truly has become a lifestyle for their church, and one that brings immense joy. “So many believers are bored with their faith,” he says. “We teach we are servants of a High King who sits on a throne. He placed us here as His ambassadors in this region. We’re going to tell the world about Him through how we live our lives. As our folks have bought into the vision of ‘live to bless’, there is a joy that is brought to their lives that is of Christ because they’re serving for the King in a manner that has eternal significance.”

Williams shares one particularly poignant story of transformation that has come out of this lifestyle of living to bless. He and one of his co-pastors, Shaun Jones, coach baseball for their sons’ team. One day last September, a man who had coached against them for years called Jones and said, “I’m an atheist, but my marriage is in shambles. You’re the only person I know to call.” He had never been to their church, but he had seen how they interacted on the baseball field and in the community. Williams and Jones began to meet with this man and his wife. After a period of several months, the man came to Christ. Since then, they’ve baptized him, his wife, and his two older children. Williams refers to him now as “the most prolific evangelist in our church.”

That is just one of the many stories of transformation that have resulted from Fellowship Greenwood’s commitment to love one another and love their neighbor. As they celebrate seven years of existence, Williams reflects on the baptism phrase “raised to life”, saying, “it struck me as the story of Fellowship Greenwood. You had a church with a wonderful history that had declined. It gave its building and everything away sacrificially. Seven years later we look back and see that because of the faithfulness of the original folks and folks now, the Lord has raised this church to life.” ν