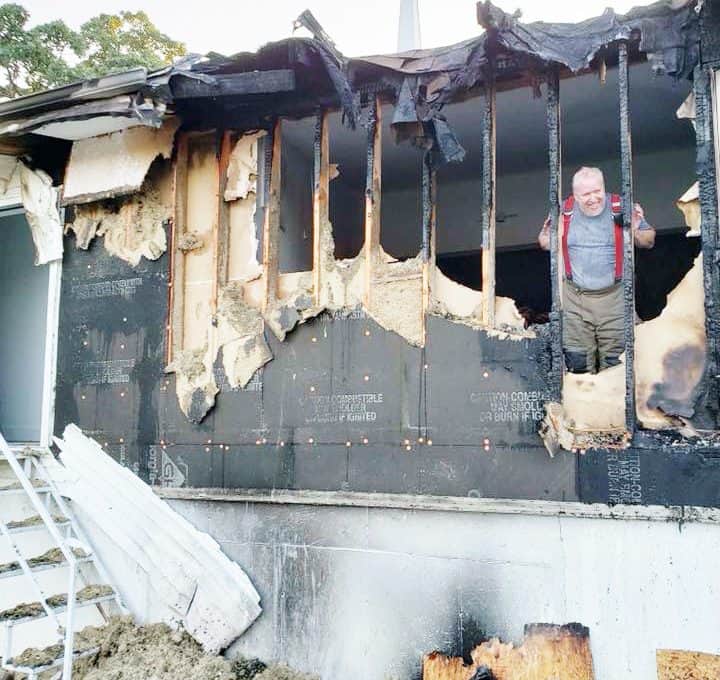 WARSAW – Arson is suspected in a recent fire that destroyed a 25-foot-section of the worship center inside Cedar Grove Baptist Church in Warsaw, resulting in an estimated $50,000 worth of damage. The church pastor, Barry Edwards, said in addition to setting the fire the vandals broke in and stole several guitars and laptop computers valued at approximately $5,000.

Pastor Edwards remains upbeat. “More than anything, the incident is an aggravation and a disruption,” Pastor Edwards said. He encouraged his congregation, in the Sunday morning service following the devastation, with a message from 2 Corinthians 4:16-18, themed, “Men’s schemes cannot undo what God has deemed.”

Cedar Grove Baptist Church is located on Missouri Highway 7, north of Warsaw, and is a member of Fellowship Baptist Association, also headquartered in Warsaw.

Pastor Edwards said there was no visible sign of forced entry, and there were no cameras or other security measures in place in the area where the fire originated. An investigation is underway by the Missouri State Fire Marshall.

According to Warsaw Fire Department Chief Rob Lane, an early morning fire was spotted at the church by a passerby Monday, Aug. 27, who then called 911 at 5:30 a.m.

Lane’s department responded to the fire and was able to contain the structural damage to an outer wall on the west side of the building. In addition, there was fire damage to the roof in this section as well as smoke damage inside the church.  Firefighters also had to cut the ceiling inside the structure to make sure the fire had not spread.

Pastor Edwards is grateful to the Warsaw Fire Department for their quick actions that helped limit the damage, and to other volunteers who have offered their support.

He said that, in addition to the facility’s structural repairs, the carpet in the worship center will be replaced. The piano, which sat on the wall where the fire started, will also be inspected for damage.

The church will be taking bids soon from building contractors with the anticipation of having repairs completed by December. In the meantime services are being held in Faith Hall, a large multipurpose area located inside the church, which can accommodate up to 400 people.

“Church volunteers have set up Faith Hall for Sunday morning services,” Pastor Edwards said. “We will continue to hold two morning services, as usual, expecting about 150 worshippers at each service.”