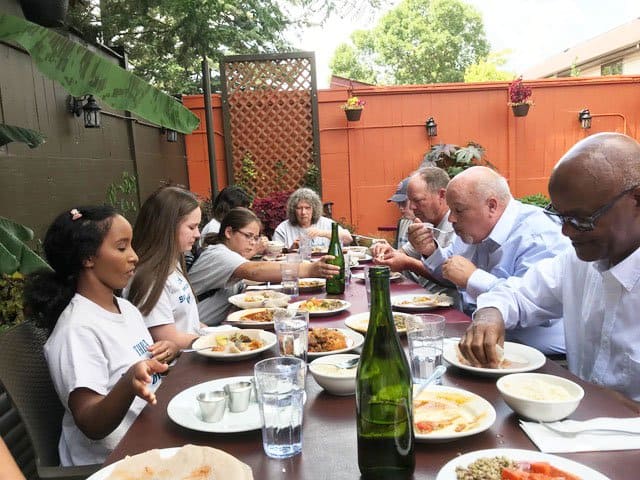 MADISON, Wisc. — The Thousand Hills Baptist Association mission team had lunch at an Ethiopian restaurant following a worship service at Antioch International Church, which meets at Midvale Baptist Church. Antioch is a primarily Ethiopian/Eritrean church. Note the expectation was that the participants would eat the stew with their hands and thin slices of flat bread. Water with no ice was also served. Though the food was a bit different than they were accustomed to (lamb, curry, rice, beef and pork with lentils), everyone seemed to enjoy the meal (although a few did resort to forks before the meal was finished). Pathway photo by Richard Nations

MADISON, Wisc. – The tidy dairy farms of Southwest Wisconsin gave way to suburban big box stores and residential homes in the Midvale neighborhood of Madison as the Thousand Hills Association mission team journeyed there to help three churches this month.

Bob Stine, pastor of Midvale Baptist Church, recruits three or four teams a summer to help with their “Kid’s Best” summer daycamp at the church.  Children from the area, many of whom have parents with a connection to the University of Wisconsin, attend the camp.  There were several children there from China, India and African nations.  Many of them are not familiar with the gospel and Stine said they usually have a couple of salvation decisions each year and add a couple of families to the congregation.

The Kirksville, Mo., area team, made up of five teens and five adults, helped with the daycamp as assistant teachers, but two of them worked alongside two ethnic church planters who are based out of the Midvale church.

The Antioch International Church is an Ethiopian/Eritrean church with about 75 attenders.  Pastor Tekeste Beyreyhones leads this church plant, and they meet in the fellowship hall of the Midvale church while the American congregation meets in the sanctuary on Sunday mornings. Eritrea is a fairly new country, having gained independence from Ethiopia in 1991 after a 30-year civil war.  In the U.S. the immigrants from the two countries do not care to fight any longer and have gladly and peacefully melded into the Antioch church.

Joel Kabamba, pastor of the First Baptist Francophone church in Kirksville spent some time visiting in African food stores in the Madison metro area looking for African people who speak French with the hope of starting a Bible study with them.  He and others found willing store owners who helped them find people from The Congo, Cameroon and Mozambique. One of the store owners was from Guinea, West Africa, and was Muslim, but she gladly pointed the team to her French speaking African customers. A Bible study leader from one of the Madison area churches was enlisted and a Bible study group is being formed.

Another church, Casa de Oracion (House of Prayer) meets on Sunday afternoons along with another church, made up of Hmong immigrants from Southeast Asia.  The Casa de Oracion church is led by a new pastor, Juan Carlos Morales, who started serving there in July.  This is his first church to lead as pastor.  He is from Mexico and was dramatically saved in an interesting story of his conversion from a life of rebellion and crime.

The director of missions for Southern Wisconsin Baptist Association, Mark Millman, said there are a tremendous amount of people groups needing to be reached in the Madison area.  The university draws people there for academic studies and the people are especially open to worshipping in churches and practicing English. Basic needs like childcare and assistance with food also are great tools to reach ethnic people in that university town.

Pastor Bob Stine was asked about what the culture of Madison and the Midvale neighborhood were like. He said, “Madison is well known for being extremely liberal socially and politically.  UW presents itself as the Berkley of the Midwest.  Madison is also home to Freedom From Religion group (which leads the charge on many anti-Christian legal causes).  So, a number of people are hostile to Christianity.  But there is a remnant of faithful and true believers and God has called us to be salt and light.  Being joined by other Christians in the work God has called us to is a tremendous encouragement and allows us to be more effective than if we work by ourselves.”

Pastor Beyreyhones said he is struggling with loneliness as his family is still behind in Eritrea in a refugee camp, and he is hoping they will be allowed to emigrate to the U.S. but visas have not yet been granted.  He communicates with them by phone about once a week, but it is expensive.  He asked for prayer and for more partners to come to Wisconsin and assist them.

As the group ministered to the Kid’s Best daycamp, one little boy stood out to the group as an especially polite and responsive child.  His name is Alex (an American nickname).

Pastor Stine said, “With the University of Wisconsin just three miles from church, we have a unique opportunity to do missions work while staying at home.  Visiting scholars from all over the world come to UW for a summer or for a year and they bring their children with them so they can learn English.  China sends the most professors and Chinese parents are the most committed to having their children learn English.  Since we teach English and math everyday, visiting scholars love to have their children attend Kid’s Best.  Alex and his mother (a visiting scholar) have attended Kid’s Best for the last 2 summers.  She is not a Christian yet, but she is eager for Alex to learn English and to be well cared for while she does her research.  This gives us an opportunity to meet her felt needs and show/share God’s love in Jesus.  This is tremendously important since she has no gospel witness at home in northern China.”

Pastor Bob Stine invites other MBC associations to consider helping the Midvale, Antioch and Casa de Oracion churches as part of the Missouri-Minnesota-Wisconsin partnership missions program.  They need volunteers and will be glad to visit about future opportunities.  He can be reached at at pastorbob@midvalebaptist.org.

The Thousand Hills group plans to return next summer.  They worshipped and ate with the ethnic congregations as well as helped with the American Kid’s Best camp and they said they had a blast!