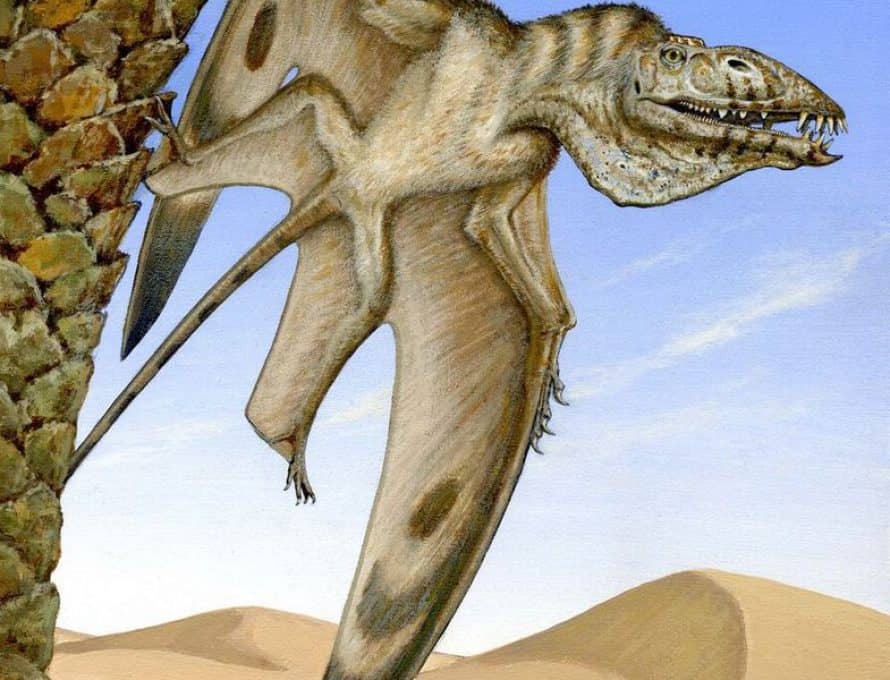 The ancient flying pterosaur “has multiple evidences of having been specially created by God (and not generated by naturalistic evolution),” said paleontologist Kurt Wise. BYU photo

PROVO, Utah (BP) – A rare pterodactyl fossil discovered in Utah has been claimed by evolutionists as evidence that flying vertebrates lived in the desert 200 million years ago. But two scientists who are biblical creationists say the creature lived about 4,500 years ago, not in a desert and was found in a fossil layer created by the worldwide flood described in Genesis 6-9.

One of the creationists also says the intricate design of the pterosaur — the scientific name of the flying creature with a five-foot wing span — suggests direct creation by God rather than Darwinian evolution.

Although the researchers’ article in the journal Nature, Ecology & Evolution “claims that the new fossil is found in deposits formed in a desert, young-age creationists would interpret the rocks in almost the opposite manner, arguing instead that the sediments were laid down during Noah’s Flood,” Kurt Wise, a Harvard-trained paleontologist who teaches at Truett McConnell University, told Baptist Press via email.

“… I suspect that a close examination of the enclosing sediments would reveal rapid, underwater deposition, consistent with (a) Noah’s Flood, (b) the remarkable preservation and near-articulation of very fragile bones, and (c) the marine sediments in which most pterosaurs are preserved — all inconsistent with desert deposition,” Wise noted.

The pterosaur discovery was published Aug. 13 by a team of researchers led by Brigham Young University paleontologist Brooks Britt. The find is unique, they stated in Nature, Ecology & Evolution, because it is well preserved and the first pterosaur that appears to have been fossilized in a desert environment. The other 30 confirmed pterosaur fossils in the world all were discovered in Greenland and the Alps.

Pterosaur fossils are “extremely rare,” Britt said according to a BYU news release, adding, “Most pterosaur bones look like roadkill,” but “for this animal, we have the sides of the face and the complete roof of the skull, including the brain case, complete lower jaws and part of the wing.”

Answers in Genesis biologist Nathaniel Jeanson agreed with Wise that the pterosaur probably wasn’t fossilized in a desert.

“What the authors do not do in this paper is extensively justify” the claim their pterosaur skeleton fragments were buried in a desert environment, Jeanson, a Harvard-trained cell and developmental biologist, told BP. “Their focus is more the paleontology…. What I’d like to see is research justification and for the creation geologists to weigh in.”

Researchers at Cedarville University, Jeanson said, “have accumulated about seven different lines of evidence or more that overturn systematically what has basically been an assumption and not actually a good scientific conclusion” — that a geological layer known as Coconino Sandstone just below the Utah pterosaur was formed in a desert environment.

Technically, Jeanson added, pterosaurs and pterodactyls are in separate biological families — though media reports and Britt have used the terms synonymously.

Wise said young-earth creationists — who believe the universe was made by God’s direct action thousands, and not millions, of years ago — believe “there may have been no deserts before the flood” and “would probably deduce a very different life environment for this pterosaur.”

Most pterosaurs died in the flood, Wise and Jeanson said, and the survivors likely went extinct shortly after Noah left the ark — perhaps because of their small population and their difficulty adapting to the post-flood environment.

The flood is “the fulcrum on which so much of this debate rests,” Jeanson said. “Was there a flood or not?” The evolutionary model says no “before doing any scientific analysis,” he said.

Irrespective of the pterosaur’s origin, however, the Utah discovery provides another strong piece of evidence for the biblical worldview, Wise said.

The specimen “is well enough preserved to conclusively argue for a complex system of air sacs in the pterosaur body, arguing that pterosaurs were almost certainly more well-designed for flight that might be apparent with the overall bird-like design of the animal,” Wise said. “Furthermore, the unique set of teeth are very well designed for slicing their food. Overall, then, this new species has multiple evidences of having been specially created by God (and not generated by naturalistic evolution).”