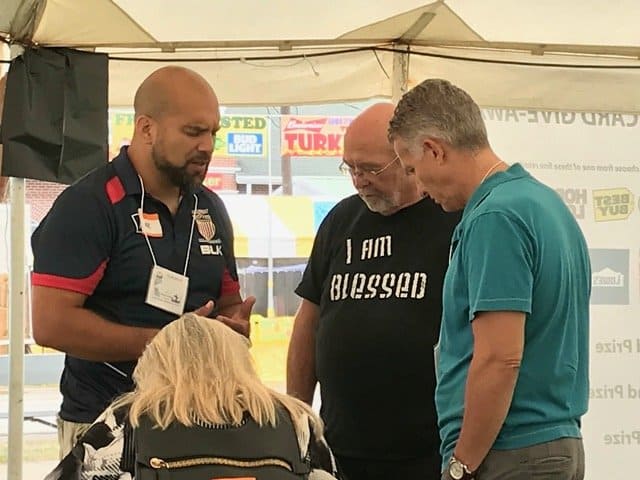 SEDALIA – Missouri Baptist Convention staffers pray for people entering the Baptist tent at the state fair August 15th. MBC staff took a shift at the Baptist tent that morning. From left: Omar Segovia, Don Satterwhite, Bill Victor and (with her back to camera) Sharon Yeats.

SEDALIA – The Baptist tent ministry at the Missouri state fair yielded 50 decisions for Christ during the recent Aug. 9-19 fair.  Forty-seven were for salvation, with three decisions for recommitment to the Lord.

State fair committee co-chairman, John Brittain said, “We had a great group of volunteers who were willing to share their faith this year.”  There were over 22 Baptist associations, churches and ministry groups who assisted with the tent ministry.

“In addition to the gospel conversations we had with the folks coming into the tent, we tried to send every Christian out with a NAMB “Life Conversation 3-Circles” guide to share with others at the fair,” Brittain said.

The MBC staff sent a crew of state convention missionaries to the tent on Wednesday, August 15th.  John Yeats, MBC executive director, said, “State fair ministry led by our directors of missions is a great opportunity for starting a gospel conversation.”

Yeats added, “Sharon and I were able to engage several people with the simple truths of the gospel. Several state missionaries were with us on that day and I was fascinated how the Lord paired us up with different people who could easily understand our message. This is a super opportunity to train someone about obeying Christ through sharing their faith. Plenty of support, plenty of prayer and plenty of lost people.”

Calvary Baptist Church in Sedalia, sent several volunteers with their pastor, Don Satterwhite, on three different days.  Some of their members worked at the fair in concessions and parking and would come by to help before or after their shifts.

Satterwhite said, “On Saturday morning during orientation with a team from Bowling Green, Mo., I was telling them how to share their story in 3 minutes or less when a mom came in the tent with her two children and said,  ‘Where do I sign up?’

“I could have told her that we weren’t open yet, (It was 9:50 a.m.) but I said, ‘Sit down at the table.’ I proceeded to share my story with the team watching and this woman made the decision to be saved. She prayed right there at the table.

“After she filled  out the registration card I told the team, ‘That is what we would like to see happen with every person that comes in the tent.’”

Pastor Satterwhite and his twin brother, Ron Satterwhite, director of missions for Mt. Salem/Wyaconda Baptist Association, Ewing, worked in the tent together a few days. One day a couple of twin girls came by to see Ron tying balloon animals for the kids at the entrance to the tent.  They got to talking about being twins and the Satterwhite brothers were able to connect with the two little girls on the basis of being twins.

At the conclusion of the fair, three names were drawn as winners of the retail gift cards being offered to the fair attenders.

Organizers will send the gift cards to the winners of the fair “giveaway” as they like to call it.  The people signing up for the opportunity to win the gift cards give “three minutes of their time” to the volunteers who then tell their Christian story in that amount of time.  They then ask if anything like that has ever happened to them and proceed with more gospel conversation if allowed by the registrants.  Most people are willing to take a little more time if they are interested in the conversations.

“Next year sign up for the Baptist tent ministry in your association,” John Brittain said.  He encouraged people to talk to their director of missions to volunteer.  The ministry is sponsored by the Missouri Baptist Director of Missions Association with funding and volunteers from MBC affiliated associations and churches as well as a grant from the Missouri Missions Offering funds provided by MBC.