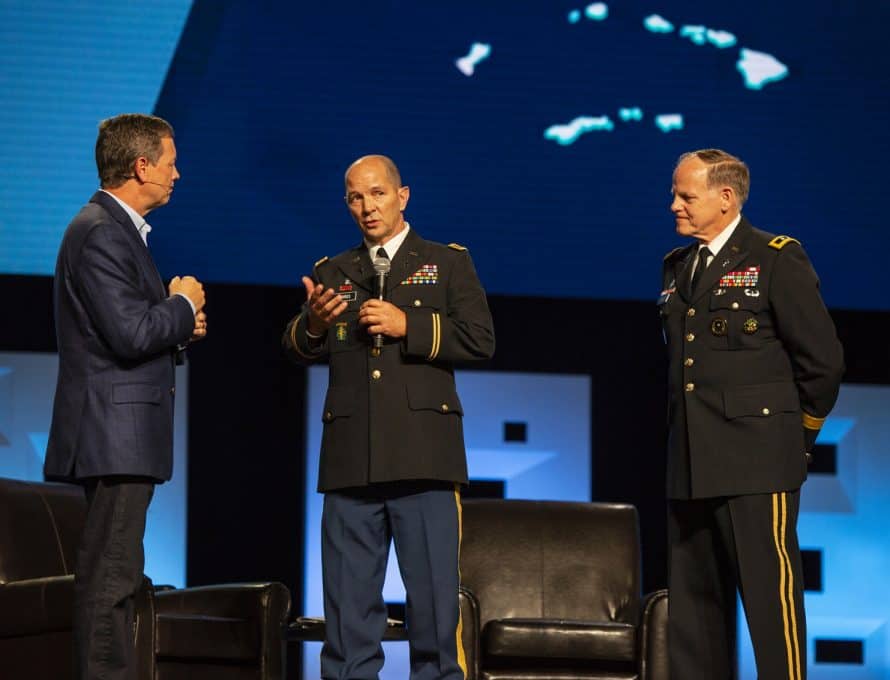 The U.S. Army announced today (Aug. 24) that the charges against Southern Baptist Chaplain (Maj.) Jerry Scott Squires, center, had been dropped. An Army investigator had recommended disciplinary action after Squires told a lesbian soldier that he could not perform a marriage retreat if she and her same-sex partner attended. In this photo, North American Mission Board (NAMB) president Kevin Ezell, left, and Douglas Carver, executive director of chaplaincy at NAMB, visit with Squires in June at the Southern Baptist Convention 2018 Annual Meeting in Dallas. NAMB Photo

“This is great news for both Chaplain Squires and all of the military chaplains who are serving our men and women the U.S. Armed Services,” said Gen. Douglas Carver, executive director of chaplaincy at the North American Mission Board (NAMB). “It is a significant victory for all who support and defend the freedoms guaranteed by the First Amendment of the U.S. Constitution, especially regarding the freedom of religion.”Squires, who had been charged with discrimination against a lesbian soldier who wanted to attend a marriage retreat, handled the situation in accordance with military policy and followed the guidelines of his denominational authority, the Army said.

Squires had been charged with unlawful discrimination and dereliction of duty, and could have faced confinement in a military prison.

Carver thanked Squires’ commanding general “for having the moral courage to make the correct but difficult decision regarding the investigation into Chaplain Squires.”

In early 2018, Squires told a soldier that he could not perform a marriage retreat for the soldier and the soldier’s same-sex partner, and Squires provided an alternative by rescheduling the event so that another chaplain could conduct the retreat.

An Army investigating officer initially determined that Squires had discriminated against the soldier and recommended that Squires face disciplinary action.

Mike Berry, the attorney from First Liberty Institute representing Squires, argued that Squires’ actions adhered to Army protocol by taking the appropriate steps to provide the service that Squires could not personally oversee or attend per the policy of his endorser.

The Army today agreed that Squires followed the correct procedure.

Throughout the process, Squires continued to fulfill his duties as an Army chaplain; but with the investigation dismissed, he no longer has to worry about the prospect of facing disciplinary action.

“Few chaplains have endured the investigative scrutiny that Chaplain Squires suffered over the last seven months,” Carver said. “We applaud Chaplain Squires and all chaplains like him who remain dedicated to their faith while seeking to respect all persons within the diverse military community.”

NAMB, the entity that endorsed Squires, augmented its ministry guidelines for chaplains in 2013 after the Supreme Court struck down Section 3 of the Defense of Marriage Act, which defined marriage only in terms of opposite sex unions. Southern Baptist chaplains are expected to respectfully serve within the pluralistic culture of the military with grace and charity, obeying such biblical commands as Romans 12:18 to, if at all possible, “live at peace with everyone.”

“From the moment the investigation began,” Carver said, “Southern Baptists have stood behind chaplain Squires with their prayerful support, wise counsel, and encouraging words. Our partners in the Gospel from other denominations faithfully stood with us as well. We are here to ensure that our chaplains can exercise their religious freedom and model the tenets of our faith as Southern Baptists in an uncompromising and Christ-honoring manner.”