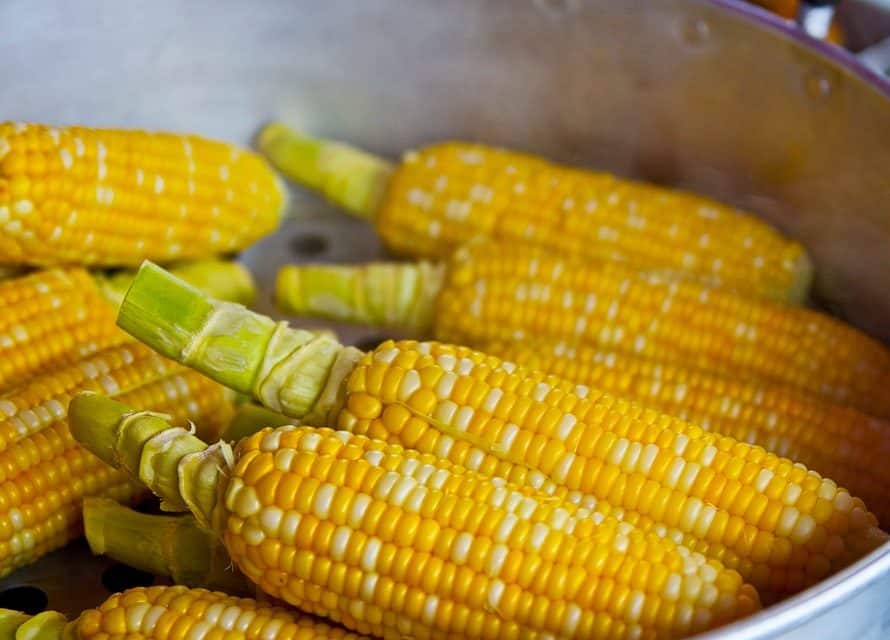 SALISBURY – No doubt about it, it was corny. And there was a lot of friendly banter. However, it was not a trite “farm to table” endeavor when members of Salisbury’s First Baptist Church came together this summer and provided 1500 ears and 161 gallons of sweet corn to Kids Across America (KAA), a Christian sports camp for nearly 7,000 urban youth, many who had never before had the pleasure of tasting the sweet goodness of the delicious buttery “roasting’ ears” that crown our tables each summer.

The warm temperature was already climbing early the morning of July 6, when about two dozen men, women and children of the church met at Jeff Gebhardt’s sweet corn patch and quickly had two pick-up beds over-flowing with ears of sweet corn. From there, the ears were delivered to the Rob Rice Farm where another couple dozen or so willing workers, ages four to eighty-four, spent the day shucking, cooking, cutting and bagging the sweet kernels. The lively chatter and serious effort was only halted at noon when the Rice family provided a sizzling bar-be-que complemented by scrumptious side dishes contributed by the volunteer labor force. Immediately after processing, the cut-corn was trucked to Shepherd Farms where Dan and Jan Shepherd had a freezer waiting for the corn to be “quick-frozen”. Five days later the gathering at Gebhardt’s was repeated, only this time 1500 ears were cold-packed and loaded in a trailer where freezers were filled with the processed kernels. Several members accompanied the delivery as Rob and Mitch Rice made the five-hour trek through the winding highways of the Ozark mountains to Golden, just this side of the Arkansas state line, where KAA staff (inner-city adult leaders) were waiting to help them husk the golden ears.

This event marked the third consecutive year of “sweet corn harvest” provided by the church. The “seed” was originally sown by Gebhardt after his family volunteered at KAA several years ago and he realized the difference made in taking an inner-city kid out of the concrete and often harsh environment to the loving, life-giving youth camp located in the scenic South Missouri countryside where Christian values are taught as campers sharpen their athletic skills.

“We’ve always sponsored children at camp but with the recent struggles in the inner cities, the corn is a way we felt we could make a personal impact, letting the kids know that someone in rural America does care about them. When I checked with the camp’s dietary director, Julie Novak, she said that all their vegetables come frozen, so we decided to go with the idea and give the fresh corn to them.” Gebhardt said.

Since then, Gebhardt has set aside an acre for Kid’s Across America’s sweet corn, a taste of Missouri’s agriculture for city kids, few who have any idea of how their food is grown. While teaching the young staff how to husk the sweet packages loaded with nutrients that promote healthy vision, B vitamins, iron and potassium, Gebhardt explained why the difficult-to-remove corn silks are necessary, ultimately giving the Creator the glory for His creation.

Although north central Missouri, where Salisbury is located, has experienced severe drought conditions this growing season, Gebhardt noted that the rows of corn that he was unable to irrigate actually produced more and larger ears than the irrigated rows, another indication of God’s provision for His children.

Kids Across America’s mission is “To build Christian leaders by encouraging, equipping and empowering urban youth and their mentors through camping and education.” Their vision is “Transforming urban youth to impact their communities for Christ.”

“We pray that our service has had a godly influence on these kids. We know it has impacted our church as we love and serve Jesus by loving and serving those He came to save,” said Rev. Mike Quinn who serves as pastor of the  270-member church.