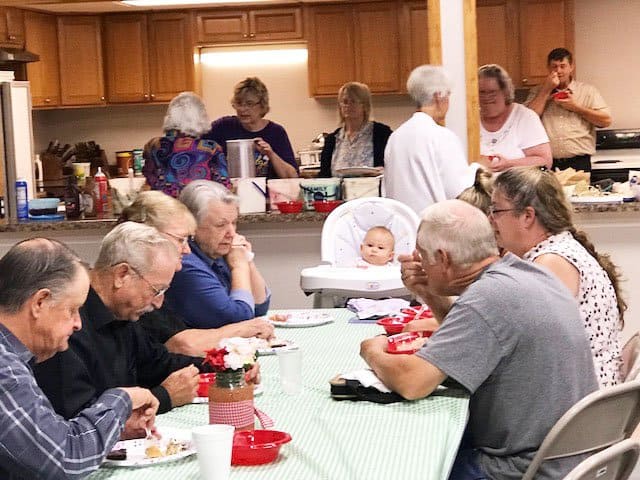 Poplar Baptist Church, located in Warsaw and a member of Fellowship Baptist Association, used the fifth Sunday evening of July to host the special event, which included an ice cream social, special music and a showing of the movie, “I Can Only Imagine.”

“Our small church is committed to supporting our annual missions offerings,” said Pastor Van Mellen of Poplar Baptist Church. “This year, we chose the fifth Sunday of July to create a special event to raise awareness of MMO.”

The promotion began at the morning service with a brief video on MMO, provided through Missouri Baptist Convention’s online resources. The Girls in Action (GA’s) of Poplar followed up the video with an explanation of the three areas of ministry supported by the annual giving: making disciples, multiplying churches and developing leaders.

In addition to these areas, the GA’s explained that MMO helps to fund the Missouri Baptist Children’s Home, and giving churches in the association involved in regional mission projects.

“I think it is important to educate our congregations about our annual state missions offerings,” Mellen said. “We should inform new members, and remind long-time members, of how vital their donations are in supporting mission-related outreach.”

Churches in the Missouri Baptist Convention may have received MMO materials in the mail or they can still be ordered. These resources include offering envelopes, 8 Days of Prayer guides and posters. There are also videos and additional resources available online at mobaptist.org, all of which can help churches facilitate their own unique campaigns.