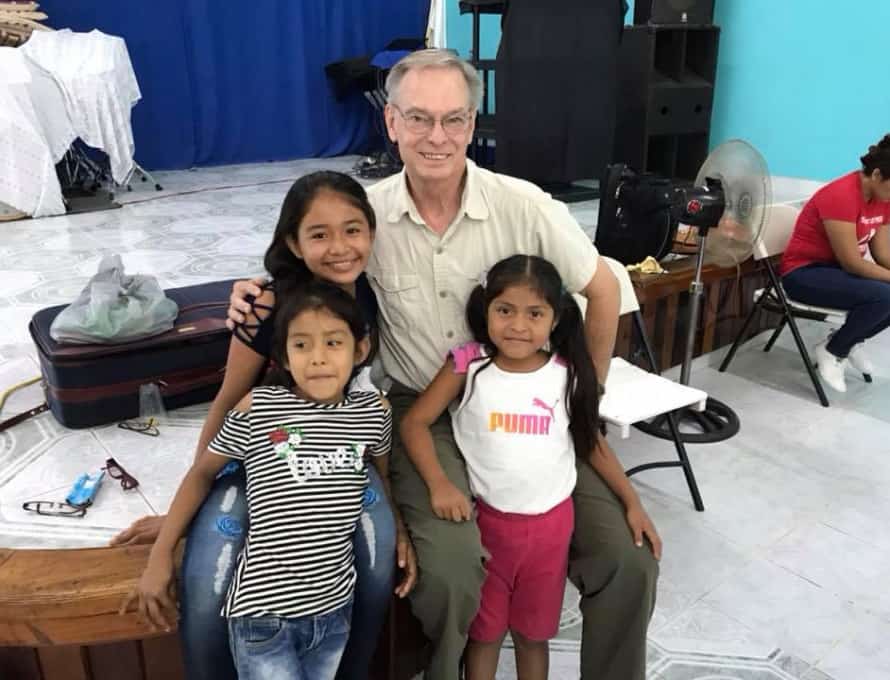 JEFFERSON CITY – Larry Merry, member of Concord Baptist Church here and a leader of the church’s Vision 3:16 ministry, poses with children in Mexico during a Vision 3:16 mission trip. Photo courtesy of Larry Merry

JEFFERSON CITY – There are hundreds of thousands of people in Mexico who struggle every day to afford basic necessities such as food, clothing, and shelter. For Mexican citizens who have poor eyesight, glasses are a luxury that many cannot afford. That’s where Vision 3:16 steps in.

Vision 3:16, a ministry run out of Concord Baptist Church in Jefferson City by Larry Merry and Ken Weiler, has been working to meet those vision needs since 2010.

Merry, founder and ministry leader, was inspired to start Vision 3:16 on a mission trip to Mexico in 2009, when God placed the need for eyeglasses on his heart.

“I looked around and nobody was wearing glasses,” Merry said. “I thought, surely their eyes aren’t that much better than ours.”

When Merry came back to the U.S., he searched for possible solutions to the eyeglass problem in Mexico, and he found Holland Kendall.

Kendall is an engineer from Kentucky who has developed a detailed procedure for holding eyeglass clinics – and fortunately, he provides training. Merry completed that training in January of 2010 and held his first clinic in June of that year.

“We could keep going [to Mexico] for years and years,” Weiler said. “The need there is inexhaustible.”

Inexhaustible, yes, and also not going anywhere. Glasses are difficult and expensive for most Mexicans to obtain. And yet glasses (and the ability to see) are vitally important for a full and productive life.

Merry and Weiler have seen firsthand the difference that glasses can make in a person’s life. Many people come to Vision 3:16 clinics hoping that glasses will give them the chance to start working and providing for their families again.

According to Weiler, a number of the women who come to the clinics make money for their families through sewing or crafts. But when their eyesight deteriorates, so does their income.

“When we’re able to match those people with glasses, we hand them a needle and thread,” Weiler said. “They’re able to thread that needle and a huge smile comes over their face.”

The glasses that Vision 3:16 provides also pave the way for Mexico’s young people to be successful.

Emmanuel Santiago, a 17-year-old boy from Chapulhuacan, is studying to be a nurse. But according to Merry, his vision was so bad he couldn’t read his textbooks or see the board in class. But once he received a pair of glasses, he was overjoyed. He could read, and his life will be forever changed because of it.

For people like Santiago, a new pair of glasses can mean the difference between a life of poverty and a life of plenty. But in the end, Vision 3:16 is about much more than improving a person’s physical sight – it’s about fixing their spiritual sight.

“Eyeglasses for us are the calling card, that’s what brings people in,” Merry said. “We’re here to share the gospel.”

And that’s exactly what they’re doing. With each clinic Vision 3:16 holds, they partner with a local church. The pastor and members of that church sit and share the gospel with each and every person who goes through the clinic.

“They speak the language, they know the people and they know the culture,” Merry said. It also gives them a chance to make contact with members of the community they might not otherwise see.

This method has been remarkably effective. After eight years of clinics, Merry says that they’ve had more than 8,000 people indicate they’re committing their lives to Christ.

“We give them something, with no strings attached, that is as precious as their ability to see again,” Weiler said. “They’re willing and they’re eager to talk to us about God.”

The efforts of Vision 3:16 have also been opening doors for evangelical Christian churches in Mexico even after they leave.

It can be difficult to reach people for Christ in places like Mexico where, according to Merry, evangelicals are not held in high esteem. However, when local churches are involved in a clinic with Vision 3:16, it changes their value in the community.

One local pastor told Merry that after a clinic was held in his town, he was seen as an important person. Before the clinic, people would close their doors in his face, but now “they willingly open the door and invite me in,” he said. “They want to hear what I have to say.”

So far, the majority of volunteers who have helped out with clinics have been from Concord Baptist Church, but Merry and Weiler are hoping to reach out to other churches and find new pools of volunteers.

Volunteers don’t need any sort of medical training or knowledge of Spanish to get involved, and Merry and Weiler provide all of the glasses, equipment, and training necessary.

“One of us will go along as a leader. We know how to run a clinic and we’ll provide the leadership and the resources.” Merry said. “All they’ve got to do is pay for the trip and show up.”

It’s a ready-made mission trip, and in Merry’s eyes it’s one of the easiest and most impactful ministries to get involved in.

“We’ll spend a week, do a three-day clinic and see 1,000 people,” Merry said. “I have never been involved in any other mission projects where I touched 1,000 lives in one trip.”