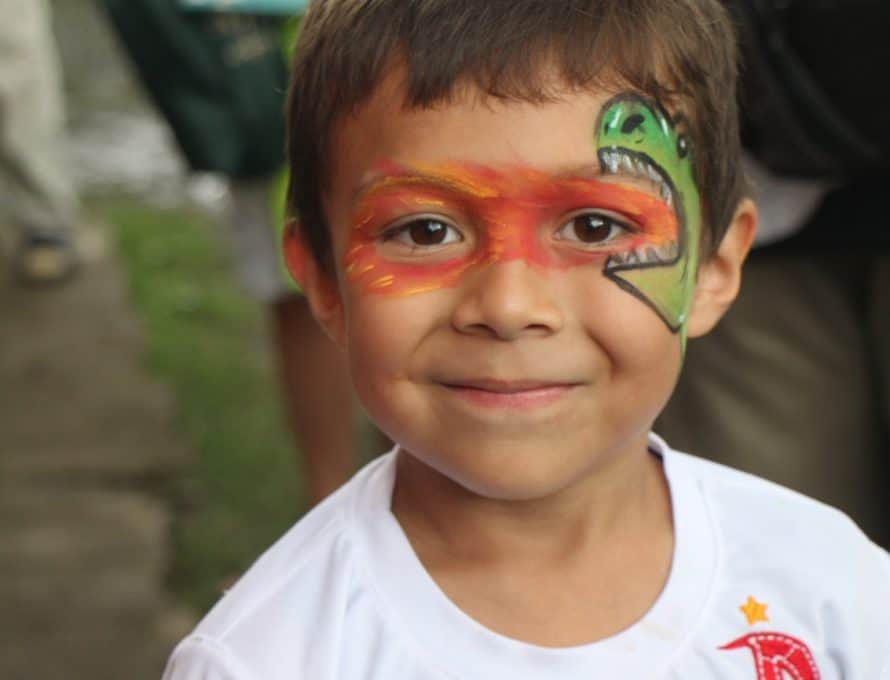 COSTA RICA – Face painting, fun and inflatables could be part of any block party, but these were in Costa Rica.  A mission trip organized by FBC Ferguson partnered with Good News in Action (GNA), a mission organization under the auspices of New Life Baptist Church in San Salvador, El Salvador, held these “Family Festivals.”  Two mission groups from North Carolina also joined FBC Ferguson in Costa Rica to witness in neighborhoods and schools throughout the week.

Joe Costephens, pastor FBC Ferguson, spoke to all the groups and the congregation of Vida Nueva Costa Rica for the Sunday service.  “All in the room are called to share,” he challenged.  “We must live and love like Jesus.”

Costephens made the content of the gospel clear.  “There are four key declarations of the gospel,” he said, “and three responses.”

Costephens outlined the declarations of the gospel based on Mark 1:14-17; Mark 8:27-31; and I Corinthians 15:1-5.  The declarations are the Kingdom of God; Jesus is the Christ; Jesus died; and Jesus rose.  Costephens continued that the three responses to these truths are 1. Repent 2. Believe and to 3. Follow.

“All of us are partners in this gospel,” he said.  “Lifelong following Jesus is the commission.  We must be changed and that is the point of this week.  We can work together to proclaim Jesus is King.”

The groups (about 35 people) did get right to work.  The first Festival was held that evening.  Translators were assigned for each small group and they set out to cover the blocks around the Festival.  Each group of three knocked on doors to invite them to the Festival and to share Jesus.  In addition to the message shared at the door, the translators presented a gospel drama and each of the pastors took a turn sharing the gospel to all in attendance.  After the message, translators and the mission team met with those interested in more information.

Each morning the mission group visited schools.  Groups were assigned to individual classrooms to share a character lesson followed by a gospel presentation.  Group members were able to do charades with the students and hand out candy to build rapport with the students.

All were excited by the positive response to the gospel.  All the Festivals through the week brought 106 responses.  The school gospel presentations prompted 584 students to raise their hands in response.

Dr. Steve Kern, pastor and director of GNA, said that all 106 Festival responses would be followed up by the pastors of Vida Nueva Baptist Church to involve them in discipleship.  The student responses are limited for follow-up because the schools would not let the church take names.

“Spiritual growth is a priority in our follow-up,” Kern said.  “We visit to see if they want to grow, and then we enroll them in the first level of twelve discipleship lessons.  We want to establish them in the Bible, church, small group and ministry.”

Kern outlined the process used for potential leadership in the organization and churches associated with GNA.

“We are watching for fruit,” Kern said.  “We want them to be under the same teacher for three years,” he said.  “We want our leaders to begin with mentors as apprentices.  We want each leader to display brotherly love (agape) and sacrifice by denying himself.”

Good News in Action is interested in developing leadership because of the future.  The group has planted more than 40 churches, and they have a vision called MetroAmerica 020.  This vision is explained in the name.  America represents countries in Central and South America because the people are receptive to the message.  The 020 represents the area between the Equator (0 degrees latitude) and the Tropic of Cancer (22.5 degrees latitude).  There are more than 220 million lost people who live in this area.  Metro represents metropolitan areas that are greater than one million.  More than 60% of the people in the Metro America 020 area live in these metropolitan areas.

Kern emphasized the importance of all the mission groups coming to serve in each of the Central American city churches.  “These contacts made by the teams are vital for the pastors to make connections,” he said.

Costephens explained it this way.  “The gospel unites us,” he said, “each of us needs to work at living the gospel and to help others live the truths of the gospel.”