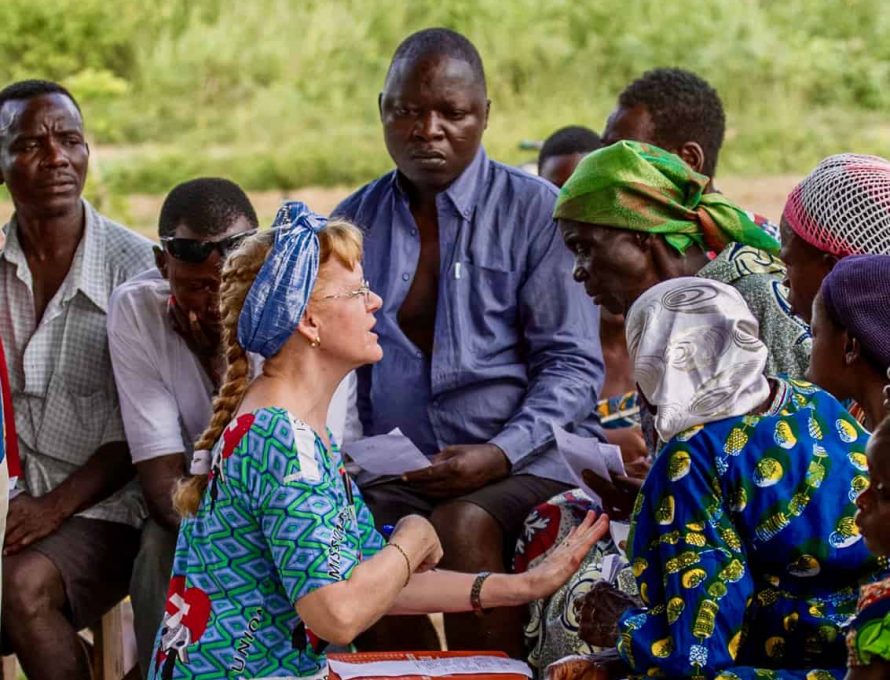 BENIN, West Africa – IMB missionary Barbara Singerman speaks with an Ayizo woman while writing down symptoms during a medical clinic in Benin. The clinic’s purpose was to meet medical needs and open opportunities for evangelization and church planting. IMB Photo.

BENIN, West Africa – In the country that birthed voodoo, Beninese Baptists are working collectively to pray for and support the spread of the gospel.

“They are investing in missions,” she said. “They are expressing a love and appreciation and oneness —participation in the work. We are completely overwhelmed.”

She and her husband, Jeff, lived in the West African country of Benin for 24 years. When they moved to the Democratic Republic of Congo (DRC), they continued to encourage Beninese Baptists to actively own the Great Commission.

Then tragedy struck: A week after a visit to Benin in March 2018, the Singermans both endured severe injuries from a horrendous car accident in the DRC. Two other IMB missionaries from Missouri, Randy and Kathy Arnett, were also in the car with the Singermans and were killed.

Injured and grieving the loss of their friends, the Singermans had no idea God was using this awful experience to mobilize their Beninese brothers and sisters.

Friends from Benin presented an astounding love offering to Jeff and Barbara, who wept. Widows gave out of their lack to help their “Beninese brother and sister” who were suffering. Others were upset they hadn’t been able to contribute right away.

This is the first time she and Jeff have seen this group of Christians unite in prayer and sacrificial giving toward taking the gospel to the nations. Church leaders across the country are calling on their congregations to pray. People have told the Singermans they will pray until they are healed.

Ask God to continue to use this horrible accident to spur Beninese Christians to own the Great Commission.

Pray Beninese Baptists will boldly share the gospel with their countrymen and the nations.

Your gifts through the Cooperative Program and the Lottie Moon Christmas Offering® support Southern Baptists such as the Singermans who are taking the gospel to people in Africa — and who help national believers lead out in that effort. Thank you for giving.