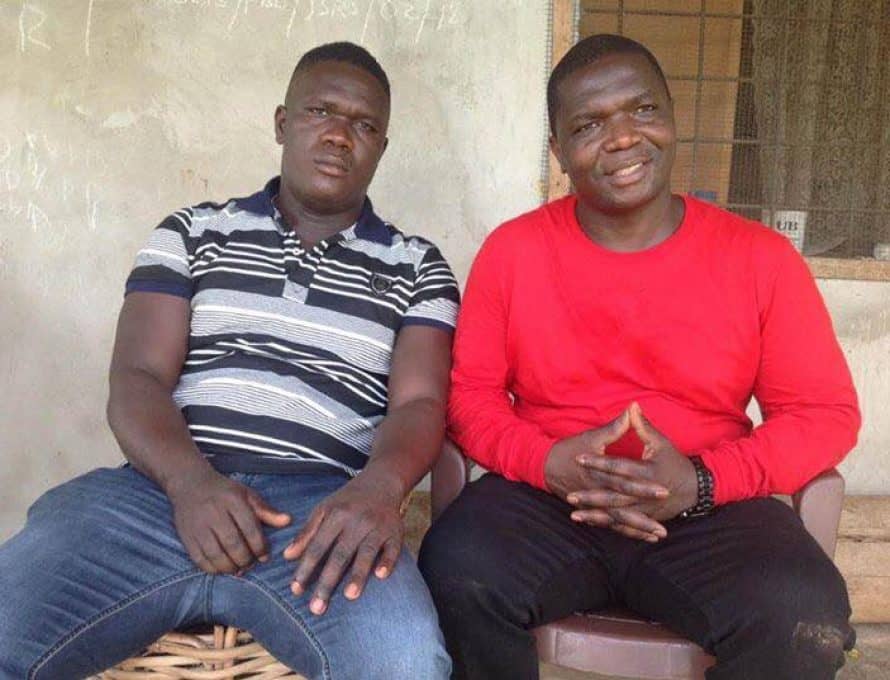 LIBERIA – Anthony Jalarue (left) – also known to his family as Man – sits next to his father and meets family members he hasn’t seen in a quarter of a century. Submitted photos.

KANSAS CITY – Four-year-old Man Jalarue looked on as a huddle of armed Liberian rebels debated whether he should die.

A week earlier, the insurgents flooded into the boy’s village, Zuajah, in the interior of Liberia. The year was 1992, and Liberia had already experienced three years of violence in a civil war that would ultimately take the lives of some 250,000 people. Now the conflict came to Man’s own home.

When it did, the boy’s family fled one way, but he fled another. Into the bush he ran, making his way to a cassava farm. For a week, he slipped into the village each day to beg for food and retreated to the farm for refuge. But then the insurgents found him, and they had only to decide now whether to kill him or let him live.

Fortunately, one soldier had sympathy on the boy and took him as his own. Carrying him to another county, he turned the boy over to his girlfriend. But in time, the civil war intensified, and Man went with his new guardians across Liberia’s eastern border into the Ivory Coast. Man later returned to Liberia, but by then he had taken on a new name, Anthony. But 25 years from the time he lost his family, he heard his true name on the lips of a stranger.

Jay Jalarue never really knew his younger brother. In 1986, two years before Man was born, he was sent to live with another family member in Liberia’s capital city, Monrovia, so he could pursue his education.

A year before his brother went missing, one of Jay’s teachers gave him a gospel tract. Afraid that he might anger God if he threw it away, he instead stuffed it into one of his textbooks for safekeeping. He moved it further back in the book every day when he read his assignment. But when he came to the end of the book, he had nothing left to do but to read the tract. Perhaps then he could trash it with a clear conscience, he thought. But as he read he fell to his knees and with tears asked God’s forgiveness for his sins and submitted to Christ’s Lordship over his life.

This act of surrender would guide Jay, in decades to come, to Kansas City, where he currently serves as a church planter among African immigrants. But, of course, his journey to Missouri was neither immediate nor simple. In 1994, two years after his brother went missing, he traveled to Nigeria and then back to Liberia, where he married his wife, Angeline, in 1999. Then he and his wife moved to Ghana, in hopes of being granted visas to the United States. As it turned out, Jay received his visa first. And, on Sept. 26, 2001, he kissed his wife and three-month-old daughter goodbye. He reunited with them in the United States nearly 10 years later.

Then, in 2011, Jay traveled to Kansas City to visit his wife’s family for Thanksgiving. There, he noticed young African men and wondered who was teaching them to follow Christ.

So, prayerfully, he decided to move his family to Kansas City to plant a church. When he arrived, he soon became a student at Midwestern Baptist Theological Seminary, where he met missionaries from the North American Mission Board and the Missouri Baptist Convention. As a result, on July 27, 2014, he and his family celebrated the launch of House of God Community Church. Today, the church has 60-65 members from nations throughout Africa.

“God is moving in a wonderful way among us. A lot of people’s eyes have been open to the truth of the gospel,” Jay told the Pathway. But of course, many immigrants – from Liberia, Jamaica, Togo, Ghana and elsewhere – need to hear the gospel. “There is a huge immigrant community here, and the need to reach out to them is great.”

Last winter, Jay’s oldest brother, Victor, served as a contract worker in Liberia’s capital. On his way home from work one afternoon, he waited at a bus stop and saw, or thought he saw, Jay.

But, of course, it couldn’t be Jay, he told himself. After all, his brother lived on the other side of the globe.

But, since the man looked so much like Jay, Victor struck up a conversation with him. The man’s name was Anthony.

“But do you go by any other name?” Victor asked him.

“I have another name,” the man replied, “but no one really knows it.”

It was a Sunday morning, approaching the Christmas season, when Jay awoke last year to find a text message from his brother, Victor. At first glance, he thought it contained a photo of one of Jay’s nephews – but, no, a photo of his long-lost brother!

“It was the most amazing feeling ever,” Jay said. “I cried tears of joy. … It’s almost like someone resurrected him from the dead. That’s how it felt.”

In April, by God’s grace and with the help of the Missouri Baptist Convention, Jay returned to Liberia for the first time since coming to the United States. He saw his father again and met 6 half-siblings whom he’d never met before. And, of course, he met his long-lost brother, Man. Together, they traveled to their former home, the village of Zuajah, where they heard their brother’s memories of the day he went missing.

Jay had hoped to witness to Man during his trip to Liberia, but the excitement and bustle of the reunion prevented him from doing so.

“With the emotions and everything else that was going on,” Jay recalled, “it was a difficult time to share my faith.”

But, as soon as he returned to the United States, MBC church planting strategist Omar Segovia paid him a visit to hear about his trip. As it turned out, Jay received a phone call from his younger brother as they visited. So, together, they shared the love of Christ with Man.

“It’s one thing to be reunited with us, your biological family,” Jay told his brother, “but there’s a bigger family you need to be a part of.”

Then he explained what it means to surrender one’s life to Christ. After he and Omar shared, they both prayed. Then, 26 years after he lost his family amid the chaos of civil war, Man joined that bigger family. He professed faith in the gospel and joined the family of God.