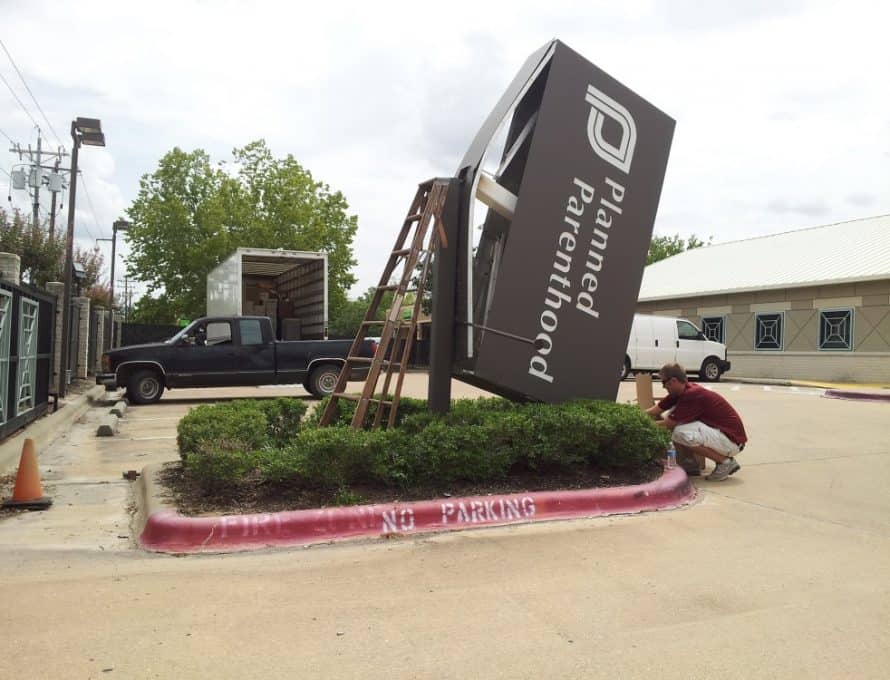 The sign outside Planned Parenthood in Bryan, Texas, comes down in late August, 2013, after the clinic closed its doors for the last time. Photo courtesy of 40 Days for Life and Coalition for Life

As I picked up the July 10 issue of USA TODAY, I couldn’t help but notice the headline of a front-page “story” titled, “A world without Roe v. Wade.” Later in the evening, POTUS was to name his nominee to replace retiring SCOTUS Justice Anthony Kennedy. We now know that person to be 5th Circuit U.S. Appeals Court Justice Brett Kavanaugh.

So, the day before the nomination, the not-so-mainstream media is hosting an opinion piece on the front page promoting a sky-is-falling mentality about whoever POTUS names to the Supreme Court. And we fully expect to hear this line of hype for the next few weeks on the national scene.

Some will tell you that this is a “politically partisan” debate. That is simply not accurate. It is an ideological debate. Here is the debate in a nutshell: Will the ideology that there is a sovereign God who rules and has His signature on every human life prevail over the ideology that claims a human life is expendable, especially if “it” introduces an inconvenience to my personal agenda? That sounds really harsh but it is true. Is the protection of human life a shared responsibility with God and man, or do personal rights prevail over that responsibility?

The scope of the article wrestled with various reactions to the abortion issue but ignored the obvious, most critical issue in the national discussion. That is the human life in the womb. Yet it is that very thing that pivots the discussion from personal rights to responsibility for another human being.

Since the time the Supreme Court fabricated Roe at the height of the sexual revolution, medical science has learned so much more about child development in the womb. According to multiple sources, once conception occurs, seven days later the tiny human implants in the mother’s uterus. About day 18, the tiny heart begins to beat, and by day 21 the heart pumps blood through a separate closed circulatory system with its own blood type. Around day 28 eyes, ears, and the respiratory system begin to form.

The USA TODAY article bemoans that if Roe is overturned, the battle over abortion will move to the states because federal guidelines would become null and void. And the divided Congress cannot even begin to have civil conversations about the issue. Even now, they cannot come to a consensus on the most practical issues because the next election is a larger priority than obvious solutions for the many issues that erode our great republic. For decades, the solution on both sides of the aisle has been to leave the tough issues to the appointed Court to legislate what the elected Congress could not sensibly discuss because of polarizing ideologies.

So, if the debate moved to the states, what would be so wrong with that? States have a greater sense of the mood of the demographics within their jurisdictions. Demographers and social engineers have known for decades that in a general sense, the Midwest and the South hold a higher view about the worth of a human life than the more urban dwellers on the east and west coasts. That is why state legislatures in middle America have consistently enacted abortion restrictions around the edges of Roe. And some states—Mississippi, Louisiana, North and South Dakota—have enacted “trigger laws” that ban abortions in those states immediately once the Supreme Court overturns Roe v. Wade.

As Christ-followers living in this part of the broken world called the USA, we have the responsibility to vote and to encourage elected officials to behave courageously and to model civility. No matter how much social media rages or how frustrated protesters become, we have a responsibility to hold our elected leaders to a higher standard of decision making. If they will not listen to the responsible ideology that protects human life, it is our civic duty to help them seek other employment.

Thank you, Missouri Baptists, for your vision to reach the world for generations through the Cooperative Program. Just this summer we have experienced amazing events through CP-supported ministries such as Super Summer (more than 800 participants) and the Summer Missionary Initiatives (105 college students from BSUs across our great state). That initiative does not include the great mission work carried on by HLGU and SBU students this summer.

Pray for those who received Christ this summer. Pray for those the Lord called out to live on mission as His disciples. The Lord is moving among Missouri Baptists through our cooperative ministries but also through many MBC churches.