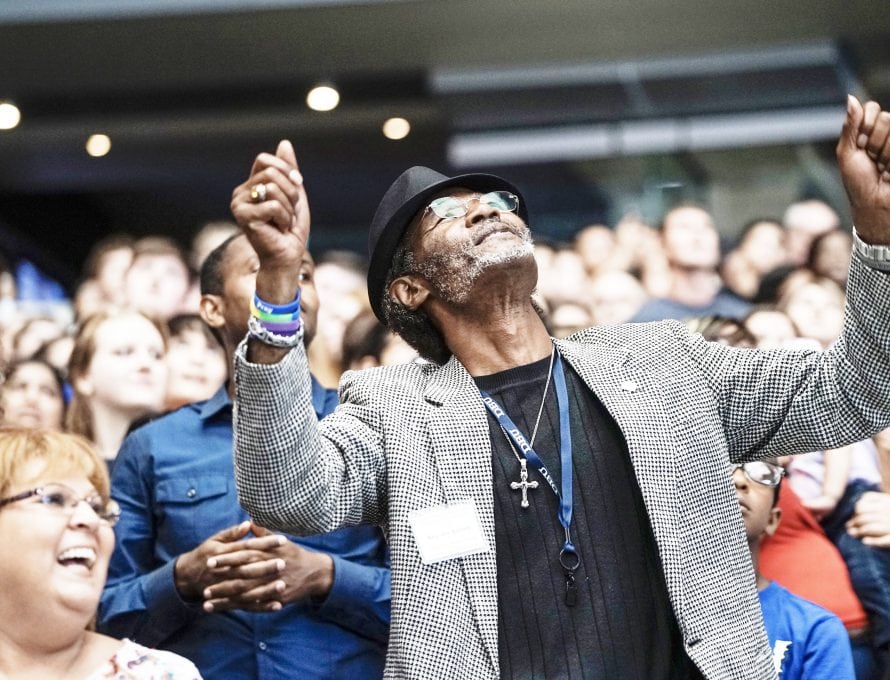 DALLAS – “I’m not here to talk to you about religion,” Pastor Greg Laurie told the crowd June 10 at AT&T Stadium in Arlington, Texas, for the Crossover Dallas Harvest America crusade.

“I’m here to talk to you about a relationship with God that you can experience,” he said. “Christ can fill that big hole that is in your heart right now. We all need Him. We all need a Savior. There’s so much stuff to distract us and emptiness to make us feel alone. Yet, Jesus, who created us, also gives us purpose. Jesus loves us all – no matter what we do or say or have done before – so much.”

In an era of divisiveness and lost hope, Laurie brought a message of unity in Christ and salvation to a crowd that preliminary counts put at 35,000 people. Laurie repeatedly pointed those in attendance back to the cross – back to Jesus.

By the end of the evening, Harvest America reported that 2,339 made salvation decisions at the event. The event was live streamed, and 100,000 people viewed online and 400 churches participated. There were 875 salvations reported from online viewers.

Leading up to the crusade, there were several door-to-door evangelism events, and Southern Baptists reported 1,015 salvations.

Brandon Kiesling, who oversaw Southern Baptist seminary involvement in Crossover evangelism efforts in the DFW metroplex, praised God for the many lives transformed by the gospel as a result of this initiative.

“The North American Mission Board was calling this one of the most successful Crossover efforts of all time,” said Kiesling, a native Missourian who served as assistant professor of evangelism at Southwestern Baptist Theological Seminary but who recently returned to Missouri, where he now serves as a minister at First Baptist Church, O’Fallon. “This was also one of the largest efforts we’ve seen in the week of Crossover for the seminaries. I was incredibly pleased with how it all came together, how many homes we were able to reach, and of course how many people came to Christ.

“I underestimated what God could do through such an army of dedicated evangelists,” Kiesling added. “God just blew the roof off of the goals that I set. You should never underestimate what God can do.”

“I thought Crossover was very well put together,” Johnston told The Pathway. “I was grateful that Dr. Kiesling organized a lot of door-to-door evangelism for us. It was very good to see the effectiveness of loving people at their door, praying for them and caring about them. … And God used it in my life and also in the lives of students who had never led anybody to Christ, never shared the Gospel.”

Johnston prays that the Holy Spirit will continue to convict those who heard the gospel during Crossover without responding in faith, and that God will connect new believers with churches, where they can be nurtured in the faith.

“I also pray that those of us who went out will never forget the power of the Word of God and that God would use us every day to share the gospel with those around us.”