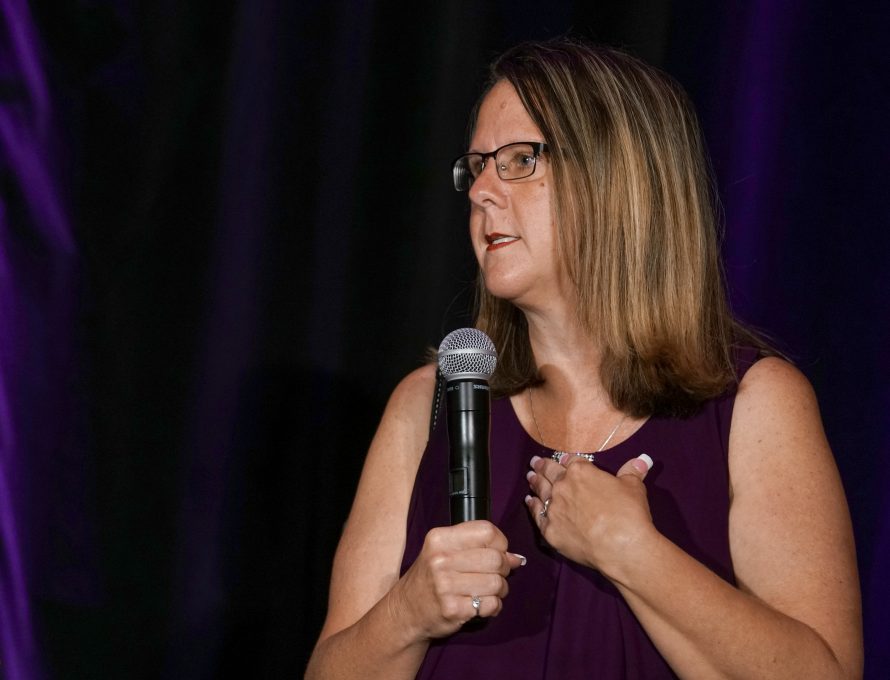 Sherri Pomeroy tells pastors' wives of life after the church shooting in which 26 lives were lost, including her daughter's, in Sutherland Springs, Texas. Photo by Kathleen Murray

DALLAS (BP) – Sherri Pomeroy never expected for 26 people in her church family to enter heaven together when she and her husband Frank Pomeroy agreed to serve at First Baptist Church in Sutherland Springs 17 years ago.

But on Nov. 5 of last year, in one of the worst mass shootings in U.S. history, a gunman took the lives of 26 worshipers, including the Pomeroys’ 14-year-old daughter Annabelle. Another 20 church members were injured in the attack.

Before the shooting, about 100 people attended the Sutherland Springs church, which was their first pastorate, Pomeroy told Donna Gaines in an interview during the Pastors’ Wives Conference June 11, prior to the SBC annual meeting in Dallas.

The Texas church’s members were “intertwined as a family,” who ate together, played together, and spent a lot of time together, Pomeroy said.

The Pomeroys, who recently celebrated their 32nd wedding anniversary, have four biological and two adopted children and many others who have lived on and off with them throughout the years.

“It’s a beautiful picture of Christian hospitality,” said Gaines, wife of SBC President Steve Gaines, who had the opportunity to visit with the Pomeroys days after the tragedy. Gaines recounted how amazed she was at Sherri Pomeroy’s calmness after the ordeal.

“I don’t know how anybody can go through any tragedy without faith,” Pomeroy said.

Even so, Pomeroy admitted that for the first few months after the shooting she didn’t even know how to pray. But she knew work had to be done. Life had to go on.

“I had to take a bath. I had to drive my car,” she said, sharing examples of how simple everyday tasks kept her moving.

Eventually, she realized it was OK that she didn’t know how to pray because there were millions of other people who were praying – and sending cards, letters and other forms of encouragement.

God met them right where they were, she said tearfully.

Pomeroy said she has been encouraged by Esther 4:14: “For such a time as this,” a Scripture her friend Karla Holcombe loved. Eight members of the Holcombe family, including Karla, died in the shooting.

Now, the verse encourages Pomeroy not to dwell on the tragedy but to focus on the hope that is in Christ.

Instead of looking down, she opts to look at what has continued: the sense of community, the meals, the baptisms and people coming to Christ.

VBS is “really going to be tough this year because Karla was the head of VBS,” Pomeroy said, noting the church will hold VBS in Karla’s honor. People have been stepping up to fulfill Karla’s role.

And the church, Pomeroy said, has nearly doubled in size already, as the watching world has taken notice of the church members’ love for each other.

When asked about words of wisdom she could offer, Pomeroy said after the shooting in Parkland, Fla., she realized she hadn’t gotten involved or prayed enough for these tragic events, which once seemed so afar.

“I’ve learned to listen more and to do what God is calling me to do – to be that hand, letter or phone call for someone else,” she said.

Gaines commended the Pomeroys for their work and closed the interview by praying for them, asking God to “do immeasurably more than all we can ask or imagine” (Ephesians 3:20) as “He uses them on the platform He has given them.”