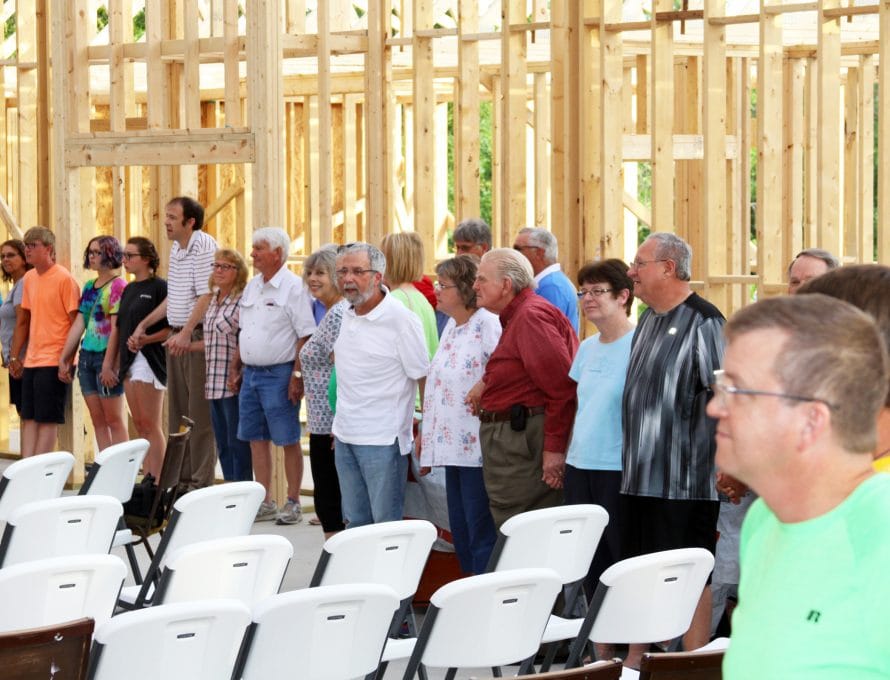 NEW LONDON – Members of Antioch Baptist Church here thanked God for volunteers who helped them to rebuild after a fire destroyed their previous building in 2016.

NEW LONDON – Antioch Baptist Church, with the help of a number of outside hands, is rebuilding. The building was destroyed in a fire five days before Christmas in 2016.

Rev. Jack Emmite, pastor, said the church has had many people helping build, but recent spring teams have included a 100-member team largely from Alabama; a 60-member team from Hermitage; a Missouri on Missions group, and volunteers from Oklahoma.  Rev. Emmite said the groups overlap, making it difficult to keep track of who is there.

Shingling of the main roof was underway June 19, when a storm blew through, postponing the work. The interior studding is done.

“We hope to be done with all the construction by the fall,” Emmite said.

Without doubt, the new two-story building with roughly 20,000 square feet has a long way to go. Yet that has not kept some worship services from being held there.

The Sunday services are still being held at the Seventh Day Adventist Church in Hannibal. However, in early June, because of the size of the construction crew and the Antioch church members – totaling over 160 people – they worshipped in the Hannibal-LaGrange University Parker Theatre.

“We just couldn’t get all the people in that small (Seventh Day Adventist) building,” Emmite said.

He said the church leadership is talking about Sunday worship services soon in the unfinished church auditorium.

The former treasurer of the church was arrested in March on federal charges of wire fraud against the church. The judicial process continues for that. The fire has been called by law enforcement “suspicious,” but has not officially been tied to the treasurer’s arrest.

“We pray about everything else. We need the prayers of others to come out on top of things,” Emmite said.