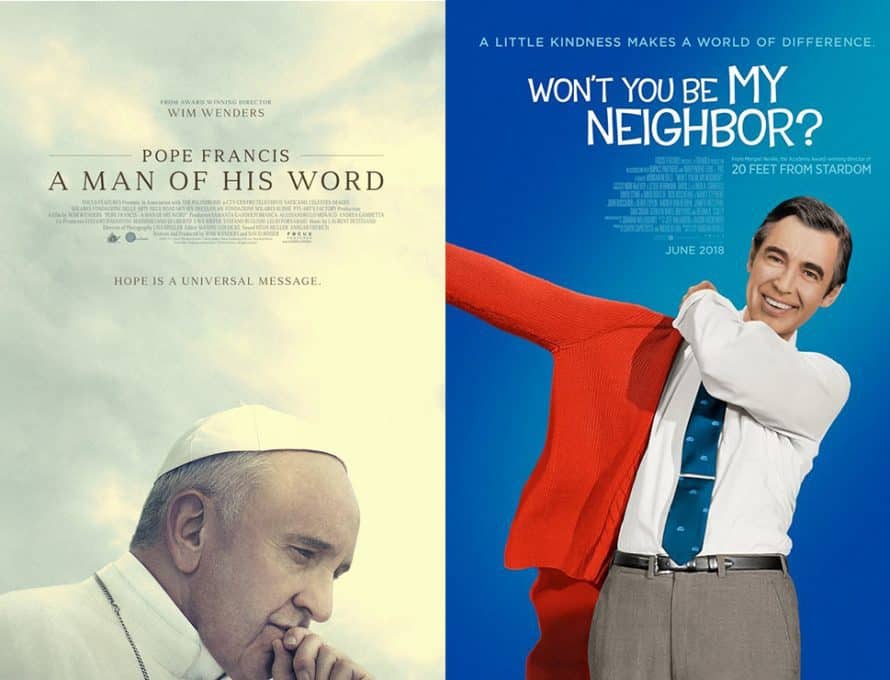 I always arrive on time to the movies so I can watch the previews. But after seeing 324 of them (seriously, I’ve kept track of the movies/trailers I’ve watched in 2018), it takes a lot to pique my interest.

But trailers for two documentaries – “Pope Francis – A Man of His Word,” and the behind-the-scenes look at Mr. Rogers, “Won’t You Be My Neighbor?” ­– both did just that. Both films are still in theaters. Both are about men devoted to “doing good.” The difference is that one explicitly explains how one man’s faith and the Bible influenced his life’s work, and the other … is about the Pope.

Not being Catholic, I’m probably not the target audience for this documentary by the award-winning Wim Wenders. What intrigued me was its title. Is Pope Francis a man of his word, or a man of His Word? Does he merely stick by what he says, or is he a man devoted to Scripture?

I hate to be critical, but let’s just say that folks who spent 2017 celebrating the 500th anniversary of the Protestant Reformation won’t be too surprised to learn that the Pope – at least as presented in this film – is simply a man who sticks by what he says and not a bit more. He’s a very nice, friendly man who does very good things, the film assures us, but it never explains why. He’s much more a kindly, old, social justice warrior than a theologian, preacher or leader. I don’t recall a single Scripture coming up in the 112-minute run time. (A few phrases such as “no man can serve two masters” are lifted here and there, but are never tied to the authority of the Bible or presented in any context.) Jesus is mentioned only once or twice, and never in the context of a personal relationship or His atonement for our sins. For a full-length feature commissioned by the Vatican, it is curiously devoid of religion and much more concerned with activism and feel-good sound bites. (Wenders reportedly had creative control, so there’s a chance responsibility for this lack of “vital information” lies at his feet, but the fact remains there is more theology in the chorus of “Jesus Loves Me” than this movie. And the irony of its title is lost on him.)

The cinemaphotography in the PG movie is very striking, and its star undeniably winsome, but its narrative structure and the words from the Pope’s own lips are muddy.

Whether you’re a Protestant or Catholic, “Won’t You Be My Neighbor?” is far and away the better of the two documentaries. Sitting in a dark theater and seeing Fred Rogers’ decidedly non-HD face smiling at me as he zips up his cardigan is nothing short of a nostalgic hug.

To be sure, Rogers never used Mister Rogers’ Neighborhood to give a Billy Graham-esque gospel invitation. But where the Wenders’ documentary divorces Pope Francis’ mission in life from any possible Christian underpinnings, Morgan Neville’s look into Fred Rogers’ “ministry” – the film actually uses that word to describe his decades on television – puts his faith front and center in the first five minutes.

As a young Presbyterian seminarian, Rogers hated children’s television. He saw it as crude, hyper, and mean. He wanted to provide something different. Something respectful, real, and not dumbed down. He saw his career in children’s television as a calling straight from God, we’re told by Rogers’ pastor. Through his puppets and lessons in the Neighborhood of Make Believe, he somehow made a connection over the airwaves. He told children they were special not to coddle them or to falsely inflate their egos, but because he saw them as created in God’s image. The same thing goes for the way Rogers treated the hurting, the scared, the disabled, people of a different race, or really anyone who appeared on his show. The only other time I’ve seen such sincerity, respect for and dedication to children is in our churches’ Sunday Schools and Vacation Bible Schools.

From an entertainment standpoint, it delivers far more grins than its Catholic cousin. It’s remarkable to see candid moments from Rogers’ life as dozens of interviewees explain that, yes, he truly was that sincere and earnest off camera. Being a product of Hollywood, the documentary does go a step too far in speculating that were he alive today (he died in 2003), Rogers would be accepting and supportive of homosexuality. (The words from his own mouth don’t necessarily support that conclusion. In fact, the movie shows a very poignant example of how he loved and respected a gay cast member while disapproving of his lifestyle.) It also earns a PG-13 rating for the bizarre use of a photo of a man – not Rogers – mooning the camera and some language from the television crew.

Adults of my generation will absolutely love the movie, but kids would be better served simply watching 90 minutes of Mister Rogers’ Neighborhood. They might find it slow or boring at first, but after a while, they’ll get the message.