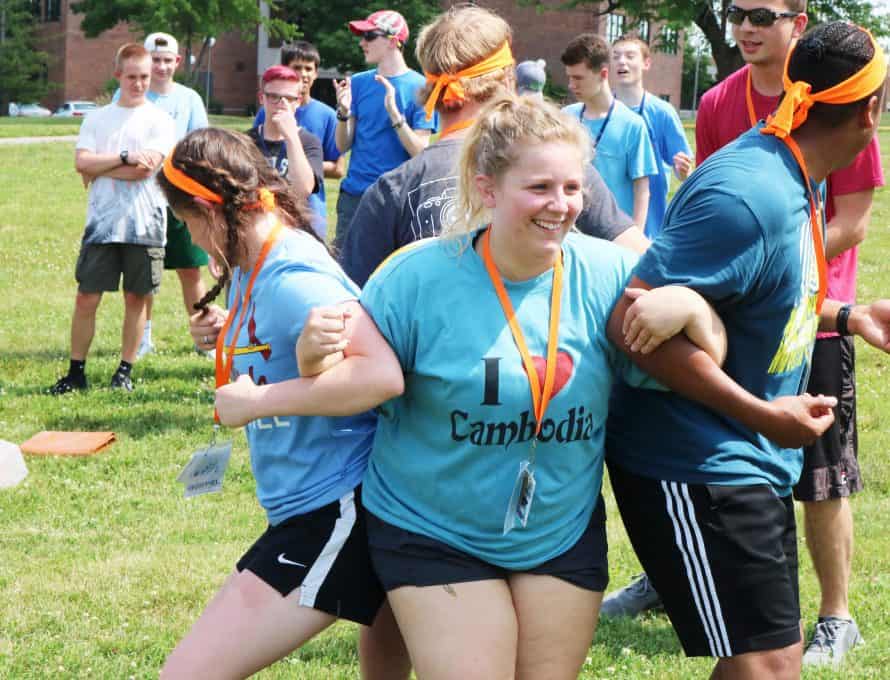 Pathway photo by Katelyn Goodwin BOLIVAR – Sarah Dunivan (center) plays a game during the recreation time at Super Summer earlier this month on the campus of Southwest Baptist University, where she began her ministry assignment as a Missouri Baptist Convention collegiate summer missionary. Now that Super Summer is over, she is spending the rest of her summer at Kamp Kiersey near Butler.

JEFFERSON CITY – At first glance, Super Summer may seem like any other Christian summer camp – a place for students from middle school and high school to learn about Jesus and fellowship with one another. The reality of Super Summer is so much more than that.

What truly sets Super Summer apart is a clever set-up that caters to believers of all ages and experience levels. Super Summer is an opportunity for anyone and everyone to come to a better understanding of the gospel and their relationship with Jesus Christ.

There are three major groups of people that attend Super Summer each year: the students, the summer missionaries, and the adult leaders. Different parts of Super Summer work to help each group grow in Christ.

The students make up the majority, and the camp is built around them. The students are split up into teams based on their grade level, with additional teams for students who want to be leaders and students who feel called to ministry. According to Jason Walters, a member of the Missouri Baptist Convention Making Disciples group and the man in charge of student and children’s ministry, this is a strength of Super Summer.

“A youth pastor can bring all of his students, regardless of where they are in terms of their spiritual development,” Walters said. “They can bring students who don’t know anything about Jesus…all the way up to students who are fully devoted followers of Jesus.”

Super Summer is committed to sharing the gospel with high school and middle school students, but it also serves as training for Missouri Baptist summer missionaries.

The summer missionaries are college students participating in an internship through the Missouri Baptist Convention, and they act as small group leaders at Super Summer.

Within their small groups, each summer missionary becomes a confidant, teacher and friend. They share their testimonies and their struggles with their group, and they tackle difficult questions about issues like cyberbullying and dealing with divorce.

By serving as small group leaders, the summer missionaries develop meaningful relationships with their students and further develop in their walk with God.

Zach Mendenhall, one of the summer missionaries who worked at Super Summer, noted that although the week was difficult, it was also rewarding.

“I had to learn to depend on God wholeheartedly,” Mendenhall said. “I saw how God was causing [the summer missionaries] to grow in Christ, and how He was using us for His glory even when we grew very tired.”

Another benefit of using college students as small group leaders is that it frees the adult leaders to do something else.

When the campers come to Super Summer, they must come with a sponsor from their home church. This could be the youth pastor, youth minister or any other adult who chooses to help out. These people are the ones that are ministered to when the kids are in their small groups.

According to Walters, most of the adult leaders who attend are not full-time youth ministry workers. They are often volunteers or have multiple jobs, and they give up a week of their vacation to go to Super Summer.

“A lot of them have never had any sort of formal training,” Walters said. “A lot of them come discouraged, needing somebody to come alongside them and say, ‘We’re with you’.”

Walters believes that helping student pastors and leaders is one of the best ways to make student ministry more effective. These adult leaders can take what they learn back to their churches and their communities in order to reach more students for Christ.

In the end, the goal of Super Summer is to teach everyone who attends about the importance of the gospel. In fact, “gospel” was this year’s theme.

“If you don’t understand the gospel, you’re not going to understand what it means to follow Jesus,” Walters said.

Interest in that gospel and in Super Summer itself has expanded in recent years. Between the two weeks of Super Summer this year, about 1,000 people attended. According to Walters, that’s a 10 percent increase from the year before.

This year was also the first time in eight years that one week of Super Summer was held at Southwest Baptist University (SBU) instead of both weeks at Hannibal-LaGrange. Although registration for the week at SBU was lower, it was an opportunity for churches from a different part of the state to attend.

Super Summer is a great time and a great ministry for all those who attend, and according to Walters it is all thanks to the generosity of Missouri Baptist churches.

“It’s going to be hard to find a better camp for the price you pay at Super Summer,” Walters said. “It’s all because of the cooperative giving of our Missouri Baptist Churches.”