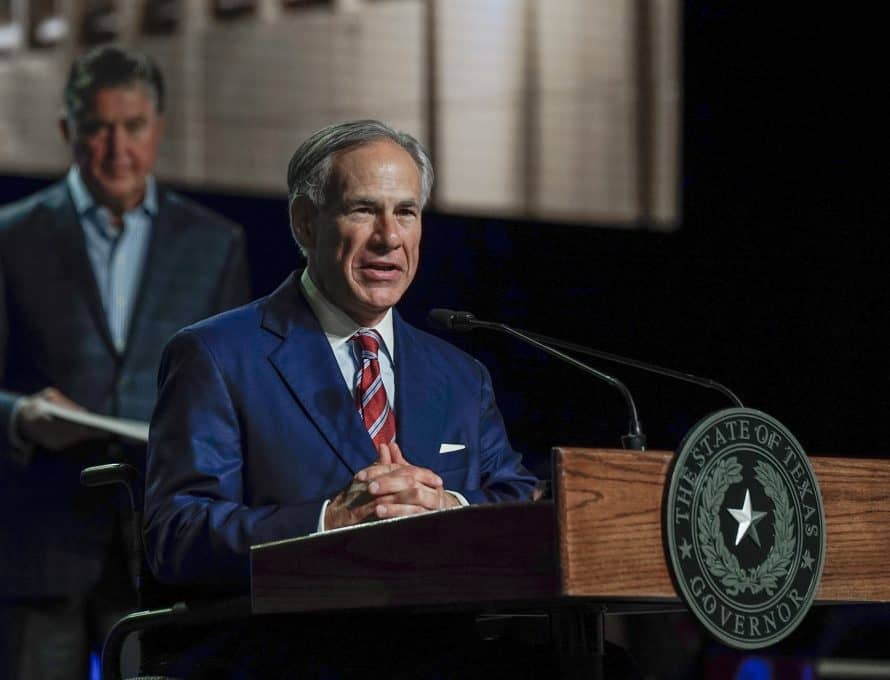 Texas Governor Greg Abbott thanked Southern Baptists Tuesday at the group's annual meeting in Dallas for their prayers and hands-on aid during times of crisis in Texas over the last year. Photo by Adam Covington

While addressing the Southern Baptist Convention at their annual meeting in Dallas, he specifically noted their response following last year’s shooting at First Baptist Church of Sutherland Springs, the devastation left by Hurricane Harvey and the more recent shooting at Santa Fe High School.

“Thank y’all so very much, and Pastor Gaines, thank you for being there during the tragedy of Sutherland Springs, just like so many people from Baptist churches across the entire nation have joined with Texas in tragedy after tragedy,” Abbott shared.

Gaines, president of the Southern Baptist Convention, met Abbott during the aftermath of the Texas church shooting that took 26 lives in a Sunday morning service Nov. 5. He described Abbot as a man who “loves people and he loves the Lord Jesus Christ.”

“This project is so enormous, no one person, no family, no one government could solve the problem,” he noted. “But the Baptist convention participants and churches were everywhere across the entire region working day-by-day helping these people muck-out their houses so they could get their lives back. Thank you, Southern Baptist Convention for what you do.”

He added, “You did more than just donate items. You gave of yourselves.”

And Abbott thanked the messengers for their prayers during the tragedy in Santa Fe on May 18, when 10 people were shot and killed at the Santa Fe High School.

“The community continues to struggle with the pain and the tragedy,” he said. “I ask you to please keep the people of Santa Fe and the victims and families of those victims in your prayers.”

“The worst of storms brought out the very best in humanity. The challenges we face actually bring us closer to God. That’s what I found in the accident that left me in this wheelchair,” Abbott said, referencing his own testimony. In 1984, while he was running, a tree fell on his back and left him paralyzed from the waist down.

He continued, “I learned that all we need to do in life is to submit ourselves to God Almighty, listen to Him, and follow Him and the rest will take care of itself.”