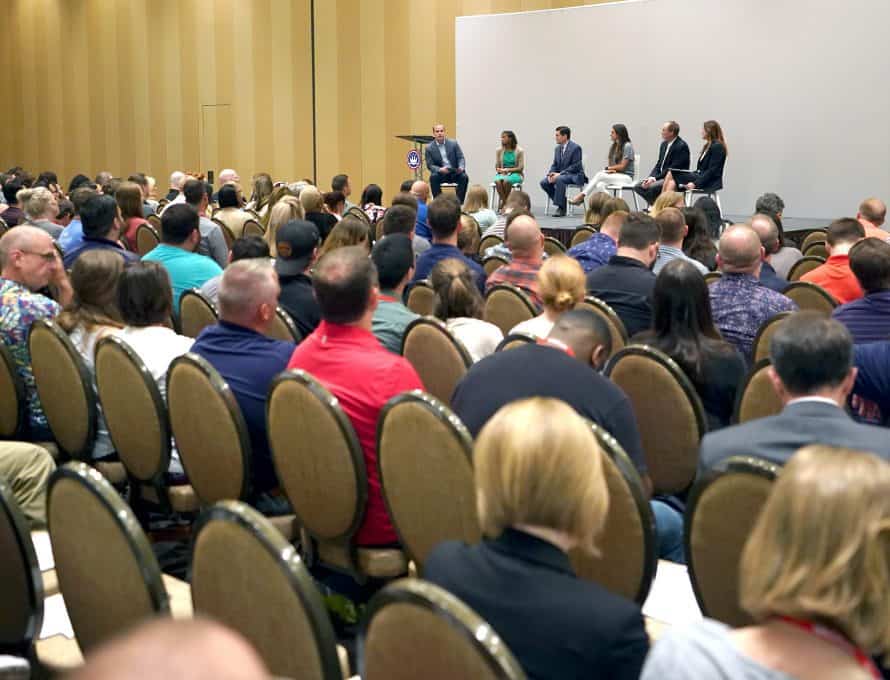 The revelations of sexual abuse of women and mishandling of it by Christian leaders offer a "divine opportunity" for the Southern Baptist Convention and its pastors to take a stand, attendees were told at a Monday evening (June 11) panel discussion sponsored by the Ethics & Religious Liberty Commission. Photo by Matt Miller

DALLAS (BP) — The revelations of sexual abuse of women and mishandling of it by Christian leaders offer a “divine opportunity” for the Southern Baptist Convention and its pastors to take a stand, attendees were told at a Monday evening (June 11) panel discussion sponsored by the Ethics & Religious Liberty Commission.

The event — “Gospel Sexuality in a #MeToo Culture” — was held on the eve of the SBC’s annual meeting in Dallas and followed months of revelations of sexual harassment, abuse and misconduct by male leaders in Southern Baptist and other evangelical churches and institutions, as well as in the culture. Panels also addressed the issue in discussions earlier in the day in the SBC exhibit hall, and a rally to protest abuse in the convention was held Tuesday (June 12) outside the Kay Bailey Hutchison Convention Center.

The events followed the May 30 termination of Paige Patterson at Southwestern Baptist Theological Seminary, where he had served as president for 15 years, following allegations he mishandled the report of a rape of a female student. He also had been criticized for past statements he had made about domestic violence and women’s physical appearance.

James Merritt — lead pastor of Cross Pointe Church in Duluth Ga., and former SBC president — said during the June 11 discussion this moment “is a divine opportunity that God has given us as a convention and as pastoral leaders to stand up and rise to the occasion and say, ‘Wrong is wrong, and this is wrong. And we are no longer going to be silent on this issue. We are going to stand up for what’s right and simply do what Jesus would have us to do.'”

He described it as “a wakeup call for pastors in our convention. The safest place an abused woman should feel she can go is her church. And the safest person she should feel like she should be able to go to is her pastor.”

Jamie Ivey, podcaster and author from Austin, Texas, told the audience of 675 registrants, “[I]t is time for church leadership and people in our churches to say [to abuse victims], ‘We hear you, and we believe you, and we trust you. I think a lot of times women can feel shame over things that have been done to them.

“I think that a lot of times the shame can be coming from the exact people who are supposed to be helping them.”

ERLC President Russell Moore urged churches not to see a case of abuse, assault or mistreatment as “a public relations issue to be managed.”

“Jesus does not need you to rescue His reputation” by concealing sin, he said.

“Sometimes there is a great deal of pain coming in unveiling ugly situations, but the light shines, and the light is ultimately redemptive,” Moore told attendees. “The way Jesus sometimes shakes up His church is not in order to harm us but in order to make us flourish.”

Too many churches, however, continue to refuse to go to authorities with abuse allegations, said Kimberly Norris, a trial lawyer and a founder/director of MinistrySafe and Abuse Prevention Systems.

“I see an abysmal failure to report,” Norris told the audience. “I see churches having cheap forgiveness or forced forgiveness between abusers and abuse survivors, which is incredibly damaging. I see some circumstances where churches and church leadership are hanging on to the idea that child sexual abuse is merely a sin. And it is a sin, but it’s also a crime.”

Regarding encouraging trends, church leaders now are “more willing to be proactive rather than simply reactive” and are less attached to misconceptions about child sex abuse, she said.

Every church needs a plan that is “thought through and proactive ahead of time rather than when the allegation is front and center and Oprah is calling,” Norris said. The plan should include training, effective screening, policies that address the grooming practices of perpetrators and a strategy to help abuse survivors, she said.

A criminal background check for workers in the church “is insufficient,” Norris told attendees. The Department of Justice reported last year less than three percent of sexual predators “will encounter the criminal justice system,” she said. “Choosing not to plan is having our heads in the sand.”

Trillia Newbell — a sexual abuse survivor and the ERLC’s director of community outreach — urged pastors to make certain they communicate to women the abuse they have suffered “is not their fault.”

She also said, “There is a difference between sexual abuse and sexual immorality,” and pastors should “keep those distinctions very clear.”