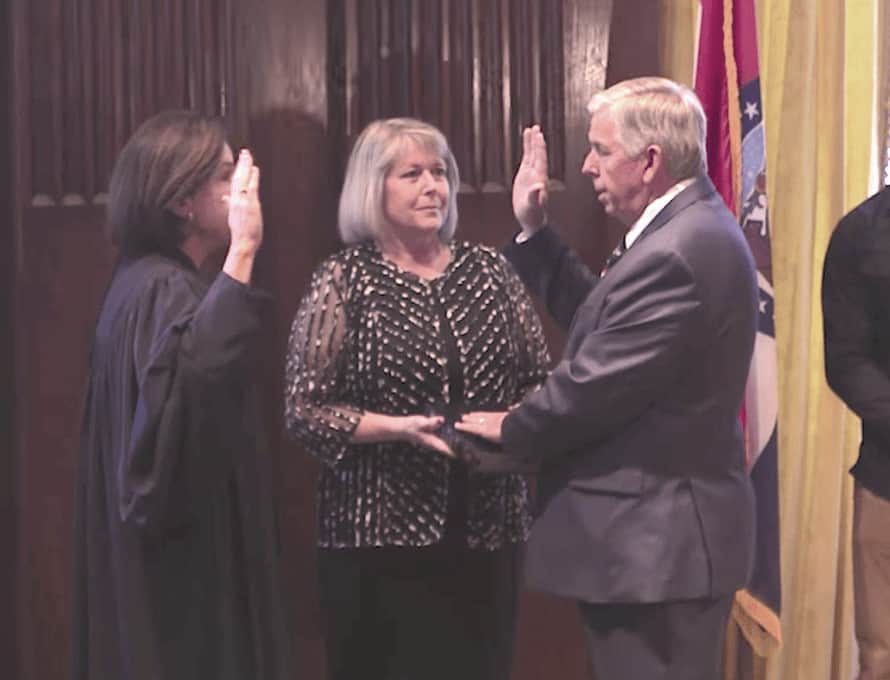 JEFFERSON CITY – After taking his oath of office as Missouri’s 57th governor, Michael L. Parson, 62, closed his brief remarks with a comment that has been on the lips of many politicians, past and present: “God bless America,” he said, and “God bless Missouri.”

But, according to the men and women of First Baptist Church Bolivar, Parson’s closing statement is no platitude. Parson has been a member at FBC Bolivar for nearly 27 years, having joined the church on Sept. 22, 1991.

“Mike’s been a member of First Baptist Church for many, many years,” said Billy Russell, pastor of FBC Bolivar, who attended the June 1st events marking Parson’s swearing into office, along with members of Parson’s Sunday School class. “I’m praying that Mike would be wise, discerning, that he would be a bridge builder, and that he would somehow be used to restore integrity in the halls of authority and power.”

Speaking of Parson’s previous role as Polk County Sheriff, Russell testified, “I admired how I saw Mike going about a very tough task. I admire how he reached across social lines in trying to help people.

“Mike is a very good listener,” he added. “I think that’s why he has done well. He doesn’t always agree with people, but he builds relationships by listening well. I think there’s an opportunity for Mike to do some relationship restoration in our state, and I pray that that would be so. I really don’t know what it would be like to walk in the shoes of Mike Parson right now. But I think maybe the Lord is raising him up for such a time as this.”

C. Pat Taylor, who has served as president of Southwest Baptist University in Bolivar for more than two decades, likewise spoke highly of the new governor.

“The State of Missouri is fortunate that in this time of crisis, we have someone with integrity experience in the lieutenant governor’s office,” Taylor told The Pathway. “I’ve known Mike Parson for 20 years and know him to be an honest, hard-working servant leader. I know that he will do his best to serve the people of Missouri. His experience in the House and Senate will serve him well as he provides leadership to move the State of Missouri forward and restore dignity to the Governor’s Office.”

Prior to taking office as governor, Parson served 12 years as Polk County sheriff, eight years as a Representative in the state House and six years as a state Senator. He served as Lt. Governor for 16 months before stepping into the Governor’s office in place of Eric Greitens, who resigned from office on June 1.

After taking his oath of office, June 1, Parson pledged to “all Missourians” that he would “work hard each and every day – to bring honor, integrity and transparency to the governor’s office.”

“I am optimistic,” he added, “about the future of our great state, and am looking forward to the work. … My purpose for being the governor will be to try and bring people together, to try to move the state of Missouri forward for what’s best for the state.”

Prior to his taking oath in the governor’s office at the State Capitol, Parson and his wife, Teresa, joined family members and other special guests for a prayer service at First Baptist Church, Jefferson City. Guests to this event, as well as to other events of the day, included Missouri Baptist Convention Executive Director John Yeats and his wife, Sharon, as well as Don Hinkle, Pathway editor and MBC public policy advisor.

During the prayer service, Rev. Kent Parson, the new governor’s oldest brother and pastor of Elkton Baptist Church, north of Bolivar, was the keynote speaker.

Rev. Parson remarked that “the very most important event that’s ever happened” in the Governor’s life was when he accepted Christ as his Lord and Savior. Second to that was when he made Teresa his wife. And the third most important event, he added, was now becoming Missouri’s governor. He encouraged the governor to have a humble and “forgiving spirit,” and told him to “never be afraid to ask God to help you with the decisions you are going to have to make.”