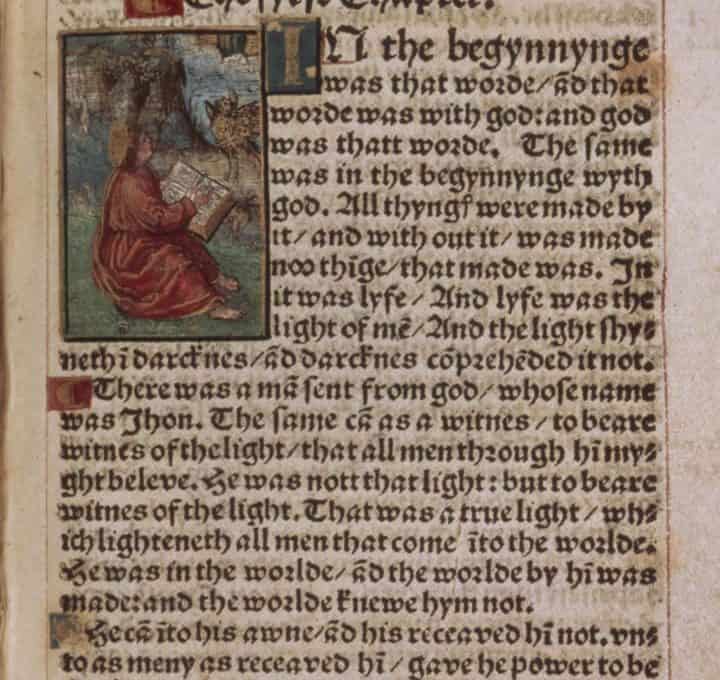 WORMS, Germany – The beginning of the Gospel of John, as printed here in 1526 by English Reformer William Tyndale, whose translation has impacted English Bible translation even to the present day.

VILVOORDE, Belgium – As the year 1535 faded into autumn and the weather turned cold, an Englishman charged with heresy and jailed in the Vilvoorde Castle here scribbled a note in Latin to his keepers. Could they bring him a warmer cap, coat and leggings? And also a lamp, he added, “for it is tiresome to sit alone in the dark.”

“But above all,” he wrote, “I beg and entreat your clemency earnestly to intercede with the lord commissary, that he would deign to allow me the use of my Hebrew Bible, Hebrew Grammar, and Hebrew Lexicon, and that I might employ my time with that study.”

It’s unlikely that they granted the last request made by this prisoner, the English Reformer William Tyndale. A year later, on Oct. 6, 1536, Tyndale was strangled and burned to death for his alleged heresies. But, even as he sat in prison, he longed to complete his life’s mission: the translation of Scripture into the English language.

Amid exile and danger, pioneer translators of the Reformation era opened the Bible to two of the largest language groups in existence today – namely, Spanish and English speakers. Today, millions of Christians, from Missouri to the ends of the earth, benefit from their sacrifice.

The Bible in English

In 1526, Tyndale printed the first New Testament ever to be translated into English from the original Greek. And, although it seemed at his death that his labors had been in vain, his translation of the New Testament, the Pentateuch (Genesis through Deuteronomy), and the Historical Books of the Old Testament shaped Bible translation for the next 500 years. Roughly 80 percent of the King James New Testament originally appeared in Tyndale’s translation.

Tyndale – and later the King James translators – could never have anticipated the massive global impact of their labors. Leland Ryken, professor emeritus of English at Wheaton College, told The Pathway that Latin was the “language of international discourse” during the 16th century. By contrast, English was spoken by only 5-7 million people and was “used for less-than-momentous discourse.” Nevertheless, roughly 378 million people across the globe speak English today as their first language, and more than half a billion claim it as a secondary language. And the King James Bible remains the most often purchased Bible in the United States, and it has shaped the language used by many other popular translations.

The Bible in Spanish

The Spanish Reformer Juan Pérez de Pineda escaped Tyndale’s fate when, in the winter of 1560, several Protestants were burned at the stake in Seville. Although he was burned only in effigy, his compatriots died that day – one of them crying to the others, “Courage, comrades! … This is the hour in which we must show ourselves valiant soldiers for Jesus Christ.”

Four years earlier, Pérez translated the Greek New Testament and Hebrew Psalms into Spanish. And, although he never completed the Bible, his work may have informed his fellow Spanish Protestant exile, Casiodoro de Reina, who published a complete Spanish Bible in 1569. This Bible was soon dubbed the “Biblia del Oso” (Bible of the Bear) because of the image of a bear on the title page.

Decades later, in 1602, Cipriano de Valera revised this translation and printed a complete Spanish Bible that would become known as the Reina-Valera Bible. This edition of the Scriptures was passed down through the centuries and is now one of the primary Bible translations used among the roughly 442 million Spanish speakers worldwide.