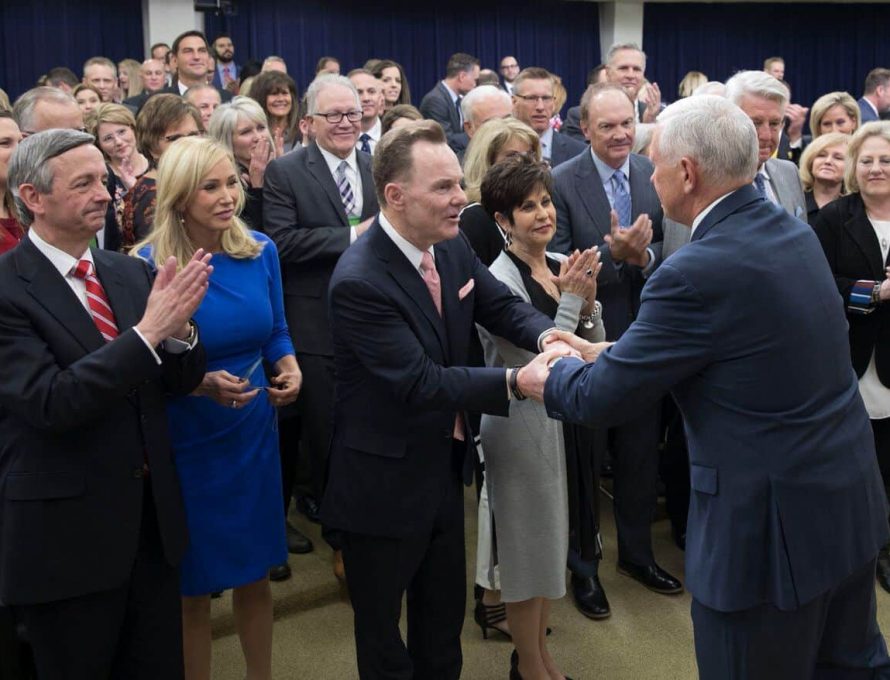 WASHINGTON (BP) – Prayer for America’s leaders and reports of a pastors’ meeting with Vice President Mike Pence were among the components of worship in some Southern Baptist churches April 15.

The prayer times and reports followed an April 11 meeting involving Pence and several dozen pastors and their wives in Washington for the Mega Metro Conference, an annual gathering for pastors of Southern Baptist churches with average worship attendance of at least 3,000 or average Sunday School attendance of at least 2,000.

Pastor Brandon Park of Connection Point Church, Raytown, attended the meeting and gave a report about it to the congregation he leads, which prays regularly for government leaders.

Park told BP he was struck by “the sheer number of born-again, evangelical Christians that are working for” the Trump administration as well as the access they grant to evangelical leaders.

Pence, Park recounted, said “there’s more about this country that unites us than that divides us, and we need to come together and focus more on what unites us as a nation.” Park viewed that comment as “a help [to] bridge some of the political divide that’s out there.”

Arkansas pastor Ronnie Floyd, host of this year’s Mega Metro Conference, said Pence gathered with the pastors during one portion of a 90-minute briefing with White House senior staff at the Eisenhower Executive Office Building.

“I thought if the vice president spent five minutes with us it would be outstanding,” Floyd, pastor of Cross Church in northwest Arkansas, told Baptist Press in written comments. “In reality, he spent about 20 minutes with us, speaking to us and affirming the administration’s great commitment to … the sanctity and dignity of human life as well as the great commitment of advancing religious liberty in America and across the world.

“He also assured the group that the president and the entire administration needed the prayers of people and the churches across America,” said Floyd, president of the National Day of Prayer Task Force. “Our pastors and wives absolutely loved hearing from the vice president and so appreciate his personal commitment to Christ.”

Pence tweeted a photo of his meeting with the pastors and wrote, “So good to see Pastor @RonnieFloyd and faith leaders in town for the 2018 Mega Metro Conference.” President Trump “and I are grateful for the prayers, support, and ministries of all these great men and women of faith. God bless them all!”

The previous evening, conference attendees met with and prayed over Sam Brownback, the Trump administration’s ambassador at large for international religious freedom.

On Sunday, Floyd told Cross Church about both meetings and led in prayer “for our nation … especially in relationship to the matters in Syria,” he said. “But as always, I called upon our people to pray for America and our leaders.”

At First Baptist Church in Hendersonville, Tenn., pastor Bruce Chesser told about the meeting with Pence and passed along the vice president’s thanks for Americans’ prayer support. Then Chesser led the church to pray for government officials at all levels of American life.

“I pray regularly for our leaders in worship so that was not unusual,” Chesser told BP via email. But Pence “specifically asked us to thank our people for their prayers and ask them to continue.”

Chesser said he was “impressed” with Pence’s “sincerity and his humility.”

“I knew he was a person of faith,” Chesser said, but following the meeting, “I realized the depth of his faith more fully. He had a good sense of humor and a winsome spirit about him. It was a great experience.”

Pastor Brian Stowe of First Baptist Church in Plant City, Fla., said attendees in both the congregation’s Sunday-morning worship services applauded when he reported on the meeting with Pence.

“I talked about his being unashamed of his Christian faith,” Stowe told BP, and about his expression of thanks for prayer support.

The gathering with Pence reminded Stowe “of the influence we can have as we lead our churches, as we lead our communities to have a stand that’s morally right,” he said.

The Mega Metro Conference, which meets in a different city each year focused on local church ministry, the pastorate, prayer and leadership, according to a news release from Floyd.