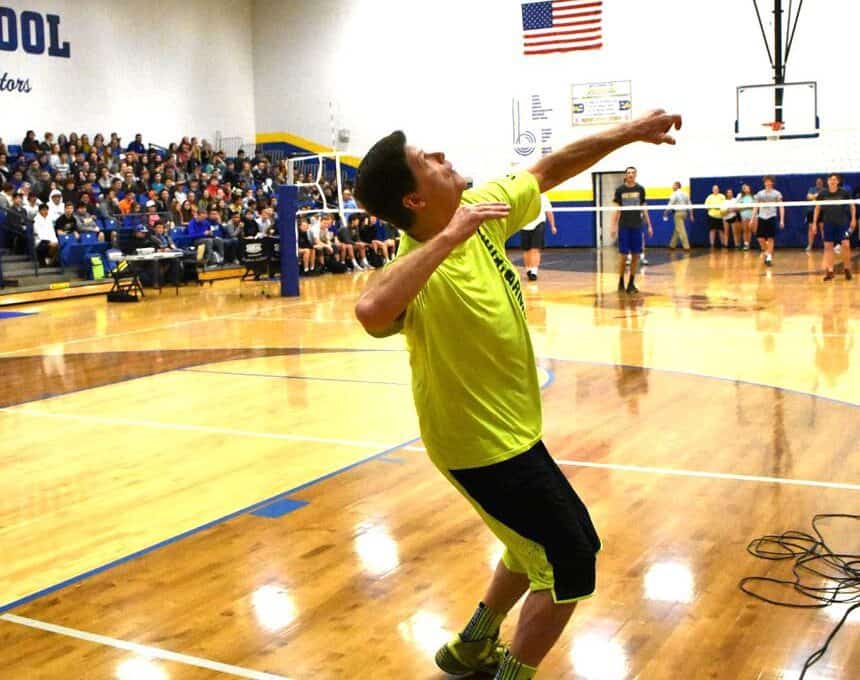 BOLIVAR – The Freedom From Religion Foundation (FFRF) has successfully gotten a “proselytizer” barred from a Missouri school district.

The Winconsin-based atheist group  objected to an invitation from Bolivar High School to Bob Holmes, the “one man volleyball team,” to give a demonstration of his particular volleyball skills presentation and a motivational message to its student body Feb. 20. Members of Agape Baptist Church in nearby Stockton – an independent Baptist congregation – were there and took pictures and video of the event and publicized it on the church’s Facebook page. Holmes – whose website says his “heart is to stop bullying, suicide, drugs and alcohol” –  also spoke at Stockton High School and Stockton Middle School. Later, at an evening rally at the school, the church reported that 300 people attended and 81 people accepted Christ.

In a press release, the FFRF complained to the Bolivar school board that “Holmes took several opportunities to preach his Christian faith to the captive student audience, proclaiming that ‘Jesus Christ is my lord and savior, and I’m not ashamed to tell you that.’” They argued that it is inappropriate to “expose” students to a “Christian missionary, regardless of any secular message the speaker claims to be promoting.”

Regardless of legal footing or interpretation of constitutaional law, the FFRF reports that their “state/church watchdog’s reasoning proved to be very persuasive” and that they have been assured by the school district’s legal counsel that Holmes will not be invited back.

“A missionary such as Bob Holmes should never have been asked to speak at a public school,” said FFRF Co-President Annie Laurie Gaylor. “We at FFRF have provided a constitutional service by ensuring that he is now banned from a Missouri school district.”

A History in Missouri

The FFRF has a history of taking objection to expressions of faith in Missouri and spooking school boards and city councils with threats of legal action, even when that expression has been found to be constitutionally protected. Last summer, the city of Neosho rebuffed the group, which recently protested the existence of a cross in the city’s Big Spring Park.

The city responded to the group, saying that “the correspondence forwarded by this organization was deficient in identifying authoritative case law within the 8th Circuit” and the city “is further of the opinion that, in fact, controlling case law would support the continued presence of the cross within the park.

“Therefore, it is the unanimous opinion of the city council that the city of Neosho will not remove the cross or take any other actions which in any way compromises the longstanding history of our city.”

The FFRR has threatened other Missouri schools of unconstitutionally supporting Christianity, and sent threatening letters to the school boards in Tipton in 2016 and Hollister last year. The letters demanded:

In Hollister, students acted against the FFFR’s complaint by continuing and expanding their lunch-time prayer gatherings, and more than 300 Tipton citizens gathered for a public hearing on the FFFR’s criticisms in September.Hollister Middle School in prayer during their lunch period.