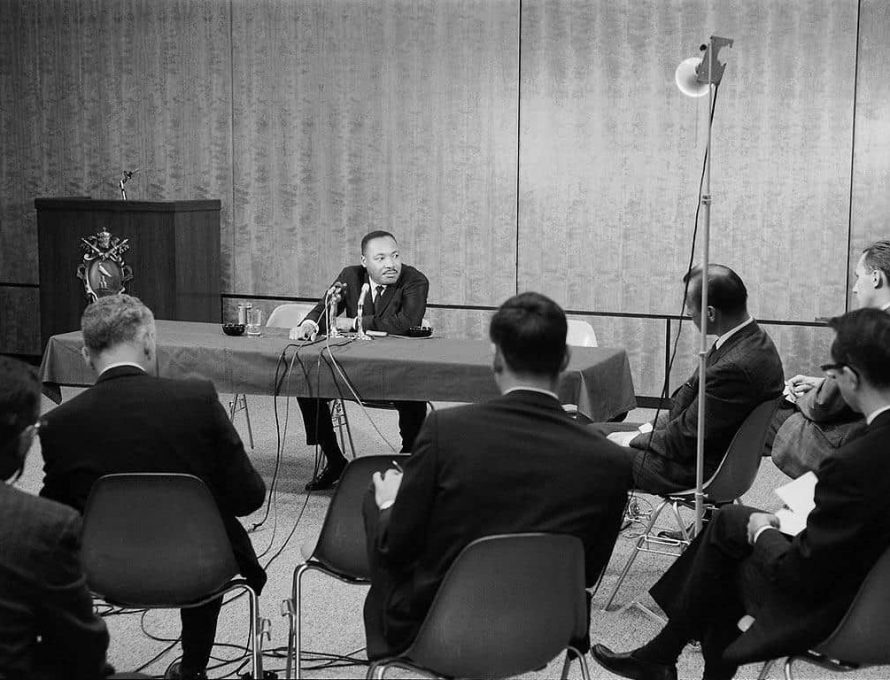 The Rev. Martin Luther King Jr. answers questions at a press conference before his speech at Saint Louis University in 1964. Photo courtesy of Plant Midwest

Earlier this month, along with other African American and Caucasian pastors from Saint Louis and East Saint Louis, I attended MLK50 in Memphis, TN, a conference designed to honor a monumental figure in American life, Dr. Martin Luther King.

History tells us that Dr. King’s work brought him to St. Louis at least nine different times with his last speech being at Saint Louis University on October 12, 1964, just two days before he would win the Nobel Peace Prize.   The MLK50 event was a powerful and stirring few days for my soul.  Before leaving Memphis, we also visited the National Civil Rights Museum at the Lorraine Motel where Dr. King was assassinated.   While touring the museum, I talked with some of my friends from St. Louis who shared stories of their parents and grandparents who grew up in the south during some of the most turbulent and regretful times of American history.

Yes, Southern Baptists have repented and sought forgiveness of the past, but there is much work to do in love, reconciliation and walking alongside one another as neighbors and co-laborers for the gospel in our city. Apologies are helpful but action is a necessity.  The challenge is immense but the pain of many of my friends is even greater.  We are supporting groups such as Faithful Men in our city, African American pastors, planters, and future leaders aimed at Gospel faithfulness and Kingdom expansion.  We are committed to serving our existing churches while working with others to plant new churches. Whether it’s economics, education, healthcare, etc., it seems a common desire within the majority culture is to believe that all are born with equal opportunity and that simply isn’t true.  The teaching of holy Scripture and the implications of the gospel call us to love mercy and to do justice.

We are weak but He is strong.  Refusing to look, or looking with rose colored glasses, at the current state of affairs in America, Missouri and St. Louis when it comes to race and racism is not an option.  Along with my friends, we will continue to pursue human dignity for all peoples, as well as the dream of Dr. King where black lives matter to all of us, especially to the Lord’s church.