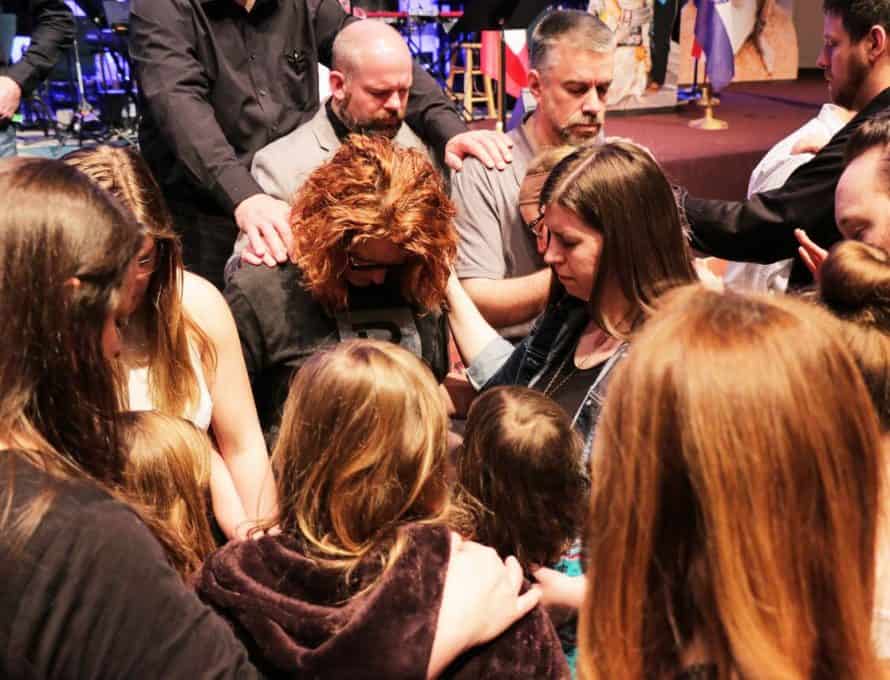 SPRINGFIELD – Early in March, the members of Ridgecrest Baptist church held a missions week where they heard from missions partners from overseas and, as shown in this photo, where they commissioned short-term teams from their church to travel the globe with the gospel.

SPRINGFIELD – Wendy Farrell’s heart for mission work among orphans of the Ukraine grew out of her love for one Ukrainian teenager.

In March, Farrell led a mission team of three families and two college students from Ridgecrest Baptist Church here to the Ukraine to work among the European nation’s orphanages. Theirs was only one of many short-term mission teams commissioned by Ridgecrest to share Christ’s love across the globe, from Ecuador, Nicaragua and Cuba to Europe, Africa and South Asia. Earlier in the month, dozens of missions partners from across the globe were also welcomed to the congregation to report – during a missions emphasis week – how God is working through their ministries.

Loving orphans in the Ukraine

Farrell’s work in the Ukraine began several years ago, when she learned from a friend’s blogsite about a 15-year-old Ukrainian orphan who would soon be released from the government’s orphan care system.

“When I read that blog post, I knew that God was telling me that this was our daughter,” Farrell said.

“It took my husband a little bit longer to hear that from God,” she added, with a laugh, “but he felt the same way.”

So nearly four-and-a-half years ago, the Farrells adopted their daughter, bringing her into the family alongside four other daughters, 5-years-old and younger.

“It was quite a jump to go from having all preschoolers to becoming parents of a teenager,” she said. “But in the Ukraine, when children turn 16, they age out of the orphan care system, and they are sent to trade schools and virtually have to learn to live on their own. They’re not taught any life skills in the orphanage. So when they are sent to these trade schools, most of the children drop out or turn to drugs, alcohol or prostitution. That repeats the orphan cycle. So you see orphans having orphans in the Ukraine.”

When she first traveled to the Ukraine in 2013 to meet her daughter, Farrell fell in love with the country, and especially with its orphans. As a result, she started a non-profit organization to minister to these children, and she leads two mission teams from Ridgecrest Baptist Church to the Ukraine each year. During their trip to the Ukraine this march, Ridgecrest members not only shared Christ’s love in state and Christian orphanages, but they also met with some families in the Ukraine who had taken in children from the orphanages.

Meanwhile, junior high and high school students from Ridgecrest trekked to Nicaragua and Ecuador to proclaim the gospel.

Student Ministry Associate Nic Goodin expressed his excitement at seeing Ridgecrest’s youth challenge men and women in the larger Catholic culture of Nicaragua to lay aside mere religion to take up a relationship with Christ.

But not only did students share the gospel; their eyes were also opened to realities of life in a poverty-stricken country. Only 3 of the 18 students who went to Nicaragua, Goodin said, had ever traveled overseas before.

“It was their first experience to lay eyes on a culture completely different than the one that the United States has,” he said. And it had an impact on students – especially as they saw the joy of Nicaraguan Christians, who worshipped and loved God passionately even though they lived in poverty. As a result, these students began to learn what it means to find one’s identity in Christ alone, he said.