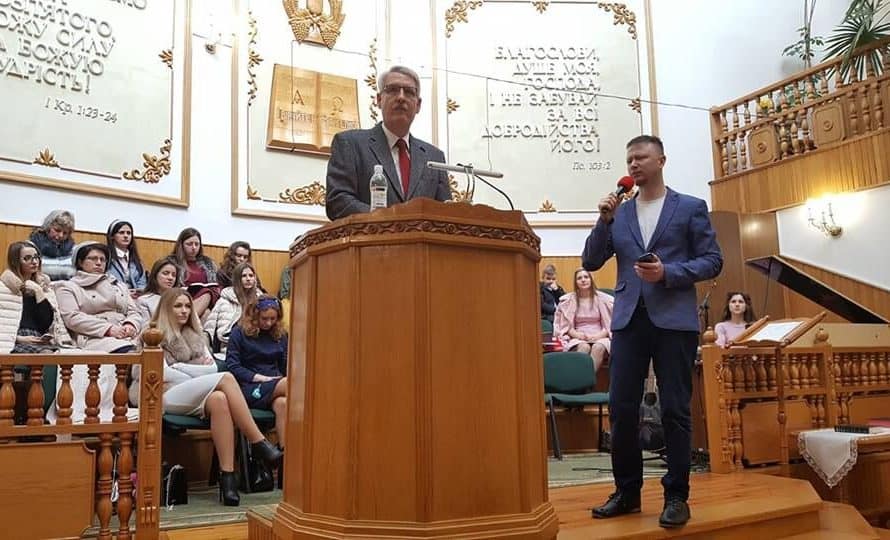 L’VIV, Ukraine – David Kreuger, pastor of First Baptist Church, Linn preaches at a Ukrainian Baptist church. He is one of four Missouri Baptists who recently taught at the Ukrainian Baptist Theological Seminary here.

“We not only taught in our particular field, but all four of us had conversations as one person taught,” Rector said.

Even when the class time was technically over, the give and take between the teachers and students was able to take a more natural, informal flavor.

“We expected them to not speak any English, but once we started visiting with them, the walls broke down and they knew more English than we thought. We got in groups and could have conversations with one other.”

Ukraine is mostly Ukrainian Orthodox, and L’viv in particular is heavily influenced by Catholicism thanks its close proximity to Poland. Baptist and evangelical work there goes back 100 years, but it hasn’t necessarily been strong. The seminary is growing however, up from 30 students to more than 600 in less than 10 years.

The association began its relationship with the Ukranian seminary about three years ago through a Elisey Pronin, a local church planter. Pronin was a pastor of a church in eastern Ukraine, and was forced out when the Russians “intervened” in the Crimea region of Ukraine in 2014. While visiting a church in Kansas, he got connected with Gasconade Valley where he spoke to several churches in the association. When he returned home, he headed up the church planting department at the seminary. The relationship developed and two years ago, Gentry taught at the seminary. Last May, Pronin returned to Missouri and spoke to the association, which led to this spring’s trip for a week of teaching.