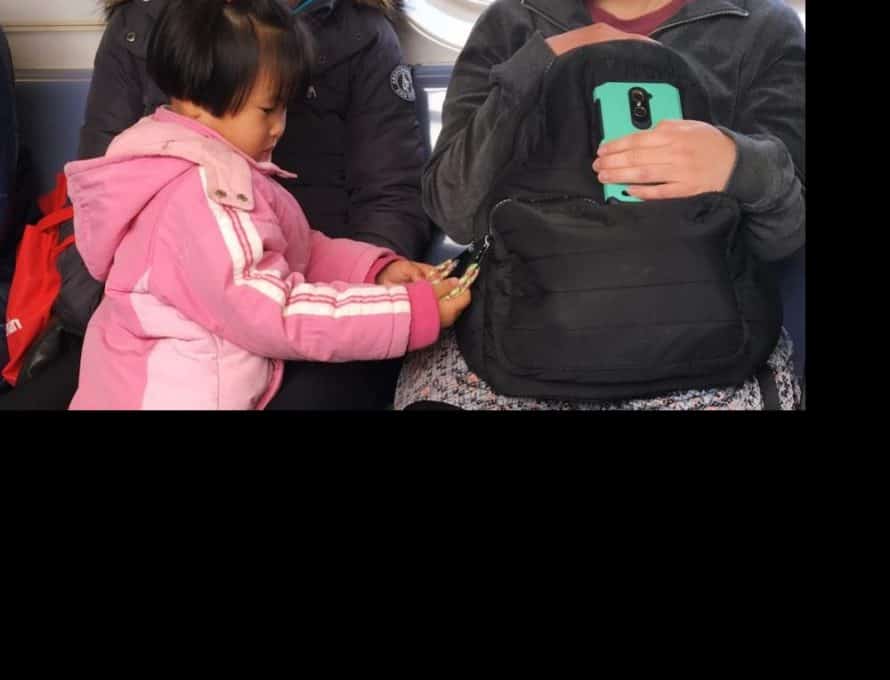 Saphyre Williams, a Passport New York college participant from Texas A&M University, makes friends with a Chinese woman and her daughter on the subway. After asking some questions with the hope of sharing the Gospel, the student learned that the woman is a follower of Jesus. Submitted photo

NEW YORK CITY (BP) — Reagan Grisham said she’s visited nine countries in her lifetime and left a piece of her heart in each one.

But when she landed in New York City for Passport New York, she said God did something unexpected — He gathered all of those pieces up.

“I thought it would be just another short-term trip,” said Grisham, a senior at Howard Payne University in Brownwood, Texas. “But it turned out to be life-changing. There are people here from all of those countries that I visited. And God affirmed a call for me to stay and plant my life here.”

“Most everybody will see the same things when they come to the city — the icons of New York, the crowded streets, the city’s glitter,” he said. “But every now and then a student will see New York with different eyes — they will see the sadness, the lostness, the hopelessness.”

And every year, the city will draw 20 to 25 of the students back to stay for a summer, a semester or longer serving as interns with local churches and church plants.

“It gives us quite a bit of impact in a short period of time, and we hope that it is impactful in the lives of students as they are praying about their future,” he said. “We love to challenge them to consider serving in some ministry capacity here.”

Ramirez and others started Passport New York seven years ago on the idea that one metro ticket in NYC was all a student needed to see the world, since every nationality lived right there.

This year’s Passport New York, from March 10-16, drew 223 students from as far away as Texas and as close as Syracuse University. Student teams served in 14 missions tracks across the city, assisting established ethnic churches and brand-new church plants.

“Our churches and church plants take this statement very seriously — we don’t want to be in our neighborhood, we want to be a part of our neighborhood,” Ramirez said. Students fleshed that out by washing windows of local businesses, getting to know business owners, picking up trash on the streets, singing and mingling on the subway and preparing meals for senior adults.

They also did narrative mapping, noting where people groups and needs were located, and worked alongside Let My People Go, an organization that fights human trafficking by caring for the vulnerable.

Sheridan Morris, a freshman at Sam Houston State University in Huntsville, Texas, said that’s where God fanned the flame of her calling to help trafficking victims. In the mornings, her team would meet with Raleigh Sadler, founder of Let My People Go for orientation, then head out into the streets of New York to train their eyes to identify the people most susceptible to exploitation.

“We would get to know them on a personal level and learn their name,” Morris said. “We bought them coffee, talked with them and tried to learn their stories.”

It broke their hearts, she said.

“All of these conversations really opened my eyes this week and showed me God’s love in a different way,” Morris said. “I’m just a freshman, and I don’t know what God’s calling on my life entails yet, but I know this is something I’m going to work with in the future. I’m ready to follow His leading.”

Ramirez said it’s been amazing to open up his phone every morning and read messages about the experiences students have had. During their conversations on the street, in parks and in coffee houses, several of the students led people to faith in Christ.

“There’s a lot of trepidation about encountering Muslims and all the different ethnicities here in New York, but these students are fearless and can go where hardly anyone else can go because of their demeanor,” Ramirez said. “We have gotten reports from almost every pastor and track supervisor saying that they didn’t expect these kind of results from students.”

And Ramirez said the celebrations are only the beginning.

For those considering coming back as interns, coordinators will begin to match applications with local New York churches in mid-April. Ramirez noted that participating in Passport New York isn’t a requirement to apply for an internship — students from any Baptist church or Baptist Collegiate Ministry are welcome to submit an application through the association’s website.

For more information about Passport New York or a MultiplyNYC internship, visit mnyba.org.