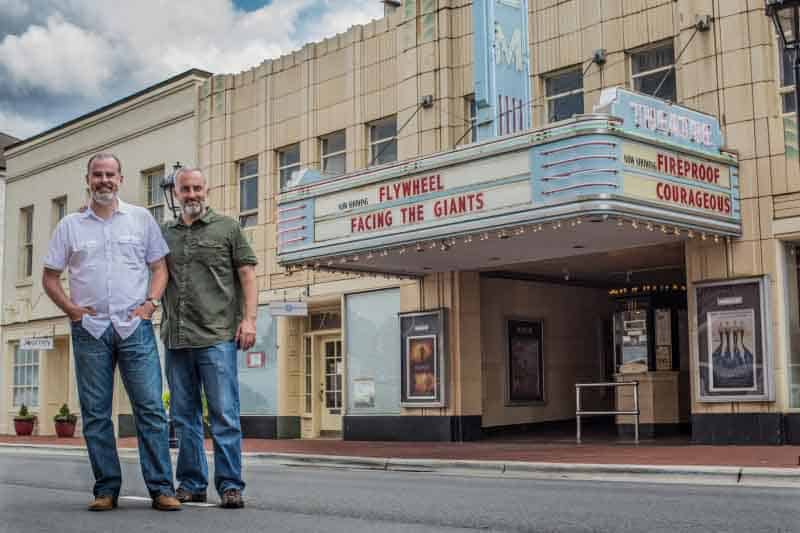 Alex and Stephen Kendrick, two brothers from Sherwood Baptist Church in Albany, Ga., used their interest in storytelling through film to produce "Flywheel" 15 years ago, conveying biblical truth about integrity through a plot based on a used car salesman. Photo courtesy of Kendrick Brothers

ALBANY, Ga. (BP) — Evangelicals were introduced to a new level of faith-based filmmaking 15 years ago when brothers Alex and Stephen Kendrick released “Flywheel,” a $20,000-budget film using church members as the cast and production crew to convey biblical truth.

“We’re just amazed at what the Lord’s done with it,” Alex Kendrick told Baptist Press.

The brothers, who served on staff at Sherwood Baptist Church in Albany, Ga., went on to produce “Facing the Giants,” “Fireproof,” “Courageous” and “War Room.” They’re still astonished at how God used their meager skills and tools in Flywheel to change countless lives.

Flywheel tells the fictional story of a dishonest used car salesman who comes to know Christ and changes the way he operates his business, risking financial ruin to uphold his integrity.

The brothers grew up in the 1980s experimenting with editing between their camcorder and VCR to tell silly stories around the neighborhood, Kendrick recounted. “We’d do dangerous stunts — falling over fences and wrecking bicycles or jumping down into a ditch or something.

“We enjoyed that, but we slowly developed a knack for learning how to do basic shooting and editing and storytelling,” Kendrick said. “As we grew older and the Lord began calling us into ministry, that love for telling stories was always with us.”

When they arrived at Sherwood in the early 2000s, Kendrick could see a movie in his head, but it was “so much harder to pull off a two-hour feature-length story than we ever imagined.”

“My first concept was not surprisingly something with a lot of action, maybe some special effects,” Kendrick told BP. “It included a plot where a character asks God to reveal Himself to him and the Lord takes him back in time and he sees a piece of the biblical time when Jesus was with His disciples, and he sees Jesus at a distance doing some of His miracles, and then he comes forward in time as if in a coma.

“The more I prayed about it, the more the Lord clearly said, ‘Alex, this is your idea, not My idea.’ Plus, I don’t think it would have been shootable at the stage we were at. We did not have film degrees. We did not have prior professional experience shooting anything other than our little videos,” Kendrick said.

Sherwood’s pastor, Michael Catt, told the brothers they could attempt a movie if it didn’t hinder their staff responsibilities. And God made it clear to Kendrick that the movie should be about lordship.

“At the time, I was buying a used minivan for my growing family, and when I went through that process of buying the minivan at the lot that we ended up shooting the movie at, that’s when it hit me that that could be the setting for a story about lordship,” Kendrick said. “So that developed into the Flywheel plot, which was at a shootable level, meaning there were no special effects, there were no explosions or car chase scenes or anything like that.”

The 2003 film, named for an auto engine key component, was mostly dramatic, with the story captivating audiences more than the film quality.

“I remember He humbled me so quickly because the movie I saw in my mind was way better than what I was looking at on the monitor,” Kendrick said. “I used to criticize cheesy Christian movies, thinking I could do so much better, until I tried to make one and I learned just how hard it is to do it effectively.

“But we did bathe that process in prayer, and the Lord — in spite of our meager skill level — still used it, and it sold over a million DVDs worldwide in numerous languages.”

Flywheel holds a special place in the Kendrick brothers’ hearts, he said, because God brought more fruit from it than they imagined. Used car lots across the nation give the movie when someone buys a car because that’s the standard of integrity they want to be known for, Kendrick said.

A company in Dalton, Ga., the carpet capital of the world, has a group of businessmen who get together and call themselves the Flywheel group because they challenge each other to operate at that level of integrity and lordship, he said.

Christian television networks still air Flywheel, which surprises Kendrick because the production quality is not in today’s high-definition tech standard.

“It’s standard definition, and there’s nothing visually impressive about Flywheel at all. If anything, I think the story grabs people’s hearts, and of course there’s truth in the movie, but it’s even hard for us to watch it because it was shot with a standard definition camera at 30 frames a second,” Kendrick said.

Movie critic Phil Boatwright, whose columns are carried by Baptist Press, said there’s always a spirit of sincerity in the Kendrick brothers’ productions. “One gets the impression this is their ministry, while at the same time understanding the No. 1 rule of cinematic storytelling — story must come first,” Boatwright said.

Michael Foust, a movie critic who hosts a family life podcast for Heirloom Audio, said the impact the Kendrick brothers have had on faith-based films cannot be