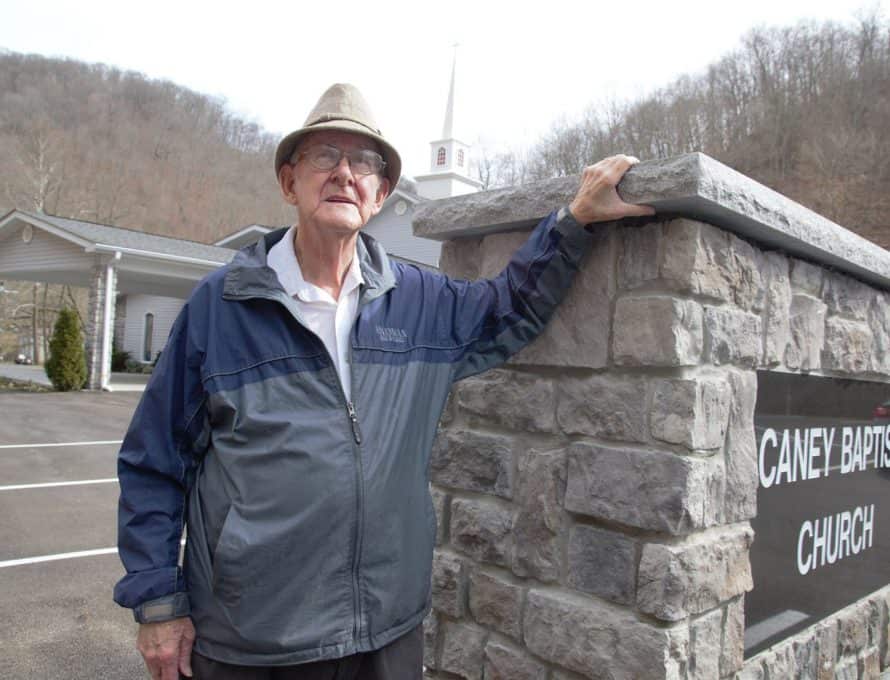 PIPPA PASSES, Ky. (BP) — At a time when the tenures of most pastors is measured in single digits, Lawrence Baldridge is an anomaly, having served Caney Baptist Church in the heart of Appalachia for 54 years.

Baldridge has baptized nearly 200 new believers since 1980, when the Kentucky Baptist Convention began keeping records. That’s an impressive number considering the population of Pippa Passes is just shy of 650. But, as Baldridge jokingly points out, his church also draws people from surrounding communities like Booger Branch, Onion Blade, Hemp Patch and Bunion Fork, where he happens to live.

“Lawrence is as good a man as ever pulled a breath,” said Knott County resident John Short, a former state legislator who represented this area in Frankfort. “He came here more than a half century ago and has faithfully ministered to the sick, comforted the grieving and buried the dead. He’s been there for the births of babies, for the weddings of our young men and women, for every major milestone in life. This good man has proven his faithfulness.”

“As our research has shown consistently, longer tenure is needed for church health,” Rainer wrote in a blog post at ThomRainer.com this past October. “Longer tenure does not guarantee church health, but a series of short-term pastorates is typically unhealthy.”

The key to long tenure for pastors, Baldridge said, is fostering strong relationships within the church and community.

“You have to make inroads with everyone,” he said. “You have to grow relationships. And that comes easy if you love people and if people love you.”

Baldridge has left no doubt that he loves the people he serves, said his long-time neighbor Ron Daley.

Daley called Baldridge a “true mountain renaissance man” who has been heavily involved in community development as a means of helping people out of poverty.

Respect for Baldridge extends far beyond the mountains. He has been an example of faithfulness for pastors across the state and beyond, said Paul Chitwood, executive director of the Kentucky Baptist Convention.

“We celebrate his enduring ministry and all that it means to Caney Baptist Church and the entire community,” Chitwood said. “Might the Lord bless and protect the ministry of all our undershepherds in Kentucky as He has Brother Baldridge’s ministry.”

Baldridge and his wife Martha, the daughter of missionaries to Brazil, arrived at Caney Creek when still in their 20s. The couple had met as students at Southern Baptist Theological Seminary in Louisville. They planned to serve as international missionaries and had their eyes on Brazil. Instead, they came to the Appalachian region with the intention of staying only two years. As they look back, it has become clear to them God wanted the Baldridges here.

Baldridge was born in Garrett in neighboring Floyd County. He received an associate degree from what at the time was known as Caney Junior College. He taught school briefly before going on to the University of Kentucky where he received a bachelor’s degree in education and English.

Later, he received master’s degrees in community development and urban studies from the University of Louisville, social work from the University of Kentucky, and divinity from Southern Baptist Theological Seminary. His education equipped him perfectly for ministry to a region that needed both a strong preacher of the Gospel and a leader who could help spark educational and economic improvements in the Appalachian region.

Baldridge helped to start the local Head Start Program to give Knott County children the foundation they needed to succeed in school. He helped start the local Senior Citizens Program to provide care for the elderly. He helped organize the first Baptist Student Union at Alice Lloyd College. And under his leadership, Caney Baptist built an eye-catching new building.

He also started a Senior Citizen Country Store that sold primarily to the elderly and was a gathering place around an old pot-bellied stove for playing music and for telling tales. It was a throwback to a bygone era, one that has been romanticized in Appalachia.

Baldridge has taught at Alice Lloyd College, The June Buchanan School, and Hazard Community and Technical College. For a while, he wrote commentary for the local newspaper, the Troublesome Creek Times. He is noted for coordinating the visit of the late U.S. Sen. Robert F. Kennedy to Pippa Passes to highlight the economic needs of the people of Appalachia. That visit by Kennedy, who made stops in several eastern Kentucky towns, called attention to poverty, that at the time was rampant in the mountains and lingers still.

Throughout his ministry in Pippa Passes, Baldridge also has been involved in short-term missions, having taken trips to Brazil, Mexico and Romania to spread the Gospel. Back home, he coordinates mission groups who come to Appalachia each summer from across the nation to build and repair homes and churches

“Brother Lawrence is a rare breed,” said Paul Badgett, a regional consultant serving in eastern Kentucky for the Kentucky Baptist Convention. “They don’t make them like that anymore. The word is ‘faithful.’ Brother Lawrence has been found faithful.”