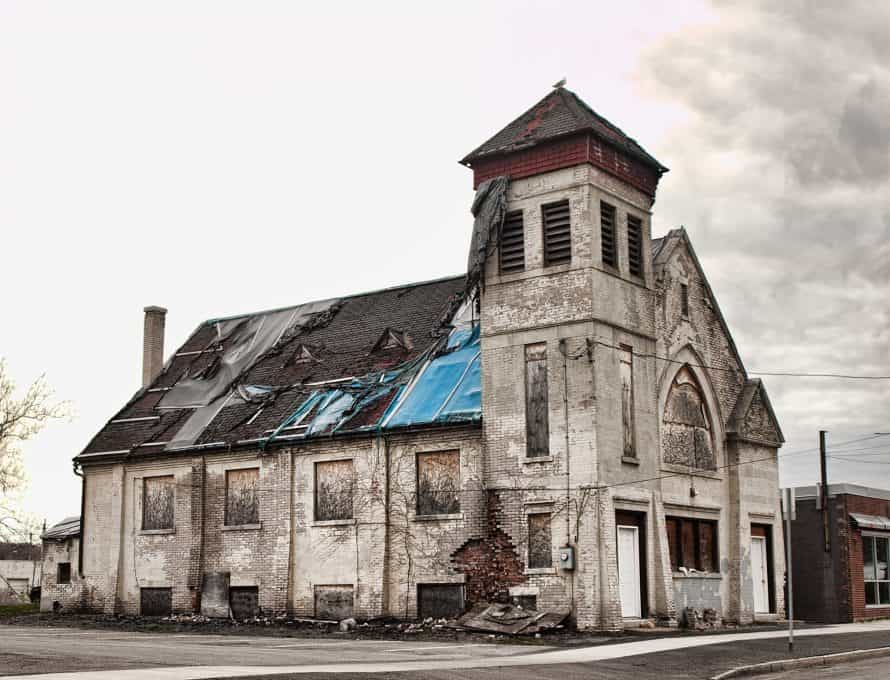 Some of us lived through the “conservative resurgence” in the Southern Baptist Convention. Some of you were too young, and have only heard your pastor talk about it from time-to-time. If you ever wondered why we needed to fight the fight over biblical authority (it was a 20-year battle) … here it is. …

One point is clear throughout church history theological disaster almost never strikes out of the blue. Trouble seems to build and build, and disaster is somehow averted again and again. But any one with eyes to see knows that eventually time is running out. Time has now run out for the Cooperative Baptist Fellowship. The CBF as it is most popularly known emerged in the early 1990s as churches aligned with the more liberal wing of the Southern Baptist Convention, self-identified as moderates, forged a new organization to replace the SBC in which they no longer felt at home. From the beginning the CBF was largely funded by congregations that were not necessarily theologically liberal at least self-consciously so, but they nonetheless disagreed with the Southern Baptist Convention’s determination to affirm and to enforce the inerrancy of Scripture other issues for catalysts including the SBC’s confessional principle against women serving as pastors.

The CBF had a more explicitly liberal wing, but the most leftward of the former Southern Baptists had left earlier forming what was then known as the Alliance of Baptists. There was a time when the SBC and the CBF were locked in the competition for the loyalty and financial support of major congregations. In turn those churches were often divided internally by the very same conflict. Over 20 years later that competition is long over the SBC in the CBF have each moved through history according to their chosen trajectories, and over time each became the proof positive of the argument of the other. That’s to say that the CBF looks to the SBC and says that’s exactly what we do not want to be, and the SBC looks at the CBF and comes to the very same conclusion. The two groups have grown steadily apart.

The Southern Baptist Convention solidified its conservative convictions and commitments while a younger generation of leaders emerged in the CBF, a generation that did not long for a return to the SBC of the past but identified with a far more liberal vision of theology and moral issues. The identity crisis of the CBF was evident from the beginning, so was the fact that the LGBT revolution would be the fuse that would eventually detonate the CBF and its identity. In June of 2000 the Southern Baptist Convention adopted a revision of its historic confessional statement known as the Baptist Faith and Message. The confessional revision was a first in modern church history, the first time that a major denomination had adopted a more conservative confession than it had previously held. The statement explicitly defined the office of pastor as limited to men. It affirmed the inerrancy of Scripture and a host of other conservative convictions.

Daniel Vestal then coordinator of the Cooperative Baptist Fellowship predicted that 5000 churches were then ready to leave the SBC and to join the CBF in reaction to the confession. In October of 2000 the CBF was under pressure to answer criticism that it was leaning leftward on the question of homosexuality and its coordinating Council adopted what they called a statement of organizational value that precluded the hiring of non-celibate homosexuals for CBF staff or missionary field appointments. The move was immediately criticized even then by many within the CBF and especially those identified with its theological schools. We should note historically that no such exodus by the way from the SBC to the CBF ever occurred.

Within a decade momentum was clearly building for a change in CBF policy. It was well understood that the main factor holding the leadership from such a change was financial. The loss of support from churches outraged by any policy condoning homosexuality would have been devastating. The conflict we should note was largely and is still largely generational. By 2012 an elected moderator of the CBF would openly call for a removal of the policy forbidding the hiring of non-celibate LGBT personnel. Again and again calls for such a change were answered with delay. Then came the wider LGBTQ revolution, the legalization of same-sex marriage and open floodgates of moral revolution. More conservative forces in the CBF refused to join the revolution, but others mostly younger saw the current CBF policy as morally wrong and oppressive. Now they see it as even more so. Most of the seminaries and divinity schools serving the CBF joined the LGBTQ revolution long ago, and their graduates have been demanding that the CBF join the revolution as well.

David Gushee perhaps best equipped of all to observe the CBF over the course of a generation noted and I quote, “Over these 25 years, CBF life has produced far fewer leaders and people who could be described as evangelicals or moderate-conservative Baptists, and far more who could be described as something like mainline Protestants. Meanwhile,” he wrote, “the original founding moderate-conservatives–often based in Texas, interestingly enough–are aging out. The CBF,” he argues, “has become an uneasy coalition of moderates,” and those he describes as real life liberals.

He goes back to remind that those who are called moderates back in the day were actually labeled moderate conservatives. That indicate something of the shift in the CBF, but Gushee went on to write, “The latter,” that is the real life liberals, “are mainly, though not exclusively, younger, and among the clergy, most are products of the new Baptist seminaries.”

In the last decade or so some CBF churches have become fully LGBTQ affirming, some perform same-sex ceremonies and some have called openly LGBTQ ministers and pastors. Push came to shove as the CBF announced in 2016 that it would move forward through what it called an “Illumination Project” that would allow for a new direction for the CBF on LGBTQ issues. Last week, that project’s report was released, and at the very same time the fuse was detonated. The report entitled, “Honoring Autonomy & Reflecting the Fellowship,” has infuriated LGBTQ proponents, and it has simultaneously alienated more conservative churches. Its recommendations offer a ridiculous and unstable policy. The report and related news reports reveal that the proposed policy will allow for the hiring now of openly LGBT CBF personnel in some positions but not in positions of leadership or missionary field assignment. The new policy, if adopted, would create a dual morality – one for an estimated 80% of CBF staff and the other for supervisory staff and field personnel. The two moralities contradictory by definition would supposedly coexist within one structure.

With amazing candor the report released last Friday states that, “global partners (within and without Baptist life) have decisively rejected movement toward hiring or supporting LGBT field personnel or the inclusion of LGBT persons in ordained leadership.”

In other words, international churches, with very rare exceptions, will not cooperate with the CBF if it sends LGBT personnel to field assignments. The report also acknowledges that again I quote, “less than a handful of our congregations have called pastors who identify as LGBT.”

Nevertheless it’s hard to see how the CBF can survive with such a house divided and such an incoherent policy. One openly gay woman pastor of a CBF congregation responded over the past weekend by accusing the CBF of creating what she called and I quote, “a tiered caste system where the opinions and lives of wealthy straight people are worth more than anyone else.”

We’ve seen the same pattern throughout mainline liberal Protestantism. The moral revolutionaries push and push until the denominational middle gives way or dies out. This drama is playing out a bit later on the stage of the CBF but its end is clear enough. In the meantime, the “Illumination Project” has been truly illuminating.

This is the inevitable result of the abandonment of the full truthfulness and authority of Scripture. The CBF was born of controversy within the Southern Baptist Convention precisely and mainly over the inerrancy of the Bible. On July 9, 1991, the CBF (which would adopt that name the following day) approved what they called an “Address to the Public” that included one and only one clear theological statement, and that statement rejected the inerrancy of Scripture. The statement said and I quote, “The Bible neither claims or reveals inerrancy as a Christian teaching.”

Well once the truthfulness and trustworthiness of the Bible are abandoned, theological revisionism is inevitable. The CBF report does not even attempt the exegesis of Scripture. This is also the logical consequence of adopting a hermeneutic that allows for the service of women as pastors. For many CBF congregations that was the key issue of outrage at the Southern Baptist Convention. The same negotiation and “reinterpretation” of the biblical text that allows for the service of women pastors will logically lead to the acceptance of the LGBT revolution. How can it not? Individuals and congregations may refuse to take this step, but they have surrendered the only binding argument that would offer an objective truth claim. Eventually, the revolutionaries will win, and they know it. Clearly, some appear now unwilling to wait.

Finally, this is what happens when autonomy trumps biblical authority. The moral revolution was only possible because of the great and unsustainable shift to personal autonomy in the larger culture. The CBF was birthed in a rejection of stricter doctrinal requirements within the Southern Baptist Convention, and one of their cherished principles is and was congregational autonomy at the expense of confessional unity. Well, in response to the “Illumination Project” report, the married lesbian pastors of Calvary Baptist Church in Washington, DC expressed their moral outrage that more conservative CBF churches and international partners were holding back the full acceptance of LGBT personnel. In a pastoral letter they released in response to the illumination project report, the pastor stated and I quote, “Autonomy of the local church is not some mucky individualism that means every church can think and oppress however it wants.”

Well, interestingly, the limits of autonomy is a central doctrine are becoming clear even to some of the CBF, and revealingly so. One way or another the upcoming CBF assembly in Dallas this coming June will be historic. For Southern Baptist and other Evangelical Christians this “Illumination Project” as it is known should serve as yet another reminder of what becomes inevitable once the full authority and truthfulness of the Bible are abandoned. There is nothing to celebrate here … only sadness. This is an “Illumination Project” that truly illuminates, but in ways its authors surely never intended.