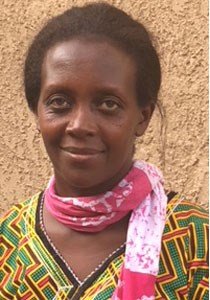 Bamurange Nyirakinyaruka fled Congolese strife when she was just 16, "hiding in the bush and in the river," and then a donkey cart, to evade her tribe’s enemies. Photo submitted

PHOENIX (BP) — For more than 7 million Africans forced to flee their warfare-stricken homelands, “home” has become a refugee camp where many wait year after year in hopes of a better life.

Bamurange and Esther are two such women who survived the Great African War, one of numerous conflicts that have plagued the continent. Braving nearly two decades in separate refugee camps, they now have settled in Arizona, safe from the conflict that claimed an estimated 2 million lives and displaced 2 million from their homes.

In the organized chaos of these refugee camps, people are constantly moving in and out. Food supplies usually run low. And stress is ever-present from such challenges as finding a tent-like covering from the rain; sharing a bathroom with the masses; sleeping on the floor; showering once a week with water brought in by trucks.

Such camps are great “levelers,” a step up from the ravages of war, bringing together those from high social status with those of lifelong deprivation.

The community copes by organizing according to their gifts. Some are teachers; others know how to cook; doctors, few in number, treat people’s ills as best they can.

Bamurange Nyirakinyaruka fled Congolese strife when she was just 16. One night, a terrible fight broke out and every relative on both sides of her family was killed, with Bamurange crediting God for His providence in protecting her that night.

“I survived by hiding in the bush and in the river,” she says of evading opposing tribesmen for many nights in the bush.

“With water up to my chin, I would dip under the water and hold my breath when the men came to the water’s edge looking for survivors” she says. “I was so afraid. By the grace of God, I was able to flee.”

A man who once befriended her family hid Bamurange in a large basket, covered her with leaves and took her to town. He guided his donkey cart right up to trucks belonging to the United Nations High Commission for Refugees and the authorities took her in.

Esther Vumiliya has a similar story.

The war took the life of her mother, father, sister and many relatives. In a grueling journey, she traveled on foot walking every day for three months until she finally reached Tanzania.

Where did she find water and food? She drank rainwater that had fallen in the streets and begged food from people along the way.

After one year in Tanzania, she arrived at the refugee camp in Uganda where she stayed 16 years.

Esther and Bamurange languished in their refugee camps, working and waiting as time seemed to endlessly pass by, wondering what their future would hold.

Both women are Christ followers who kept their faith that God would see them through, and finally things started to change.

The immigration process is tedious and exhausting, requiring dozens of interviews and standing in long lines for many hours. But after nearly two decades, Bamurange and Esther — along with the families they began as refugees — finally made it to the U.S. in 2015.

Once their planes landed in Phoenix, their struggle still wasn’t over in a new culture far different from anywhere they had ever lived. Not knowing anyone, they needed to connect to new friends, to a church and to work opportunities.

Bamurange and her family were extremely lonely for the first two weeks before a new acquaintance told her about Pastor Francis and Solution Church. Francis Tugirimana — just call him Pastor Francis — started the church in 2009 to serve the East African refugee community.

With help from the church, Bamurange’s husband was able to get a job, enabling the family to buy a car.

“I can enjoy my life, and my children can enjoy their lives. We can live free,” she says.

For Esther, “I feel better and blessed. I have a job and eat everything I need. I am able to buy clothes and stuff for my children.”

Solution Church, having become a key influence in helping the women and their families adjust to life in the States, has provided friendship, prayer, support and help with schools and teachers. English classes help people eventually find work, and guidance is even given in learning to drive a car.

Pastor Francis himself survived the Rwandan civil war and lost many relatives. Solution Church, a congregation of more than 250 people, cares for needs big and small in refugees’ lives. The church baptized 90 people in the last year.

Still, the needs are overwhelming with so many still entering the community, as the refugee crisis in many parts of Africa remains a widespread, open-ended and painful struggle.

Though their arduous journey nearly cost them their lives, Bamurange and Esther showed rugged courage, faith and perseverance. Their stories and their strength have touched their community with a testimony of God’s grace even in the worst of times.